The question is did they all decide to jump together or were they pushed?

It can be called nothing less than cataclysmic. The Catholic bishops of an entire national hierarchy have offered to step down for their negligence in handling cases of alleged clergy sex abuse of minors. 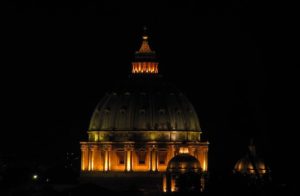 It happened on Friday when all of Chile’s bishops announced that, to a man, they have submitted their resignations to Pope Francis.

The move is the first dramatic result of a three-day emergency meeting in Rome to which the pope summoned the Chilean hierarchy to give account for the “painful events regarding abuses — of minors, of power and of conscience” perpetrated by Catholic priests in their country.

“We wish to announce that all the bishops present in Rome, in writing, have placed our positions (i.e. jobs) in the hands of the Holy Father so that he may freely decide with respect to each one of us,” the prelates said in an astonishing one-page declaration.

Those are 34 men, mostly diocesan ordinaries and auxiliaries. But one of them — the archbishop-emeritus of Santiago, Cardinal Franciso Errazuriz — is a member of the pope’s prestigious C9 council of cardinal advisors.

Will Francis accept the 86-year-old cardinal’s resignation? Will he replace the entire Chilean hierarchy? And, if so, when?

Certainly, the bishops have given him every right and opportunity to do so. In their declaration they expressed shame and admitted to wrongdoing.

“First of all, we thank Pope Francis for his fatherly listening and his fraternal correction. But especially, we want to apologize for the pain caused to the victims, to the pope, to the People of God and to the country for our grave errors and omissions,” they said.

The bishops implored “forgiveness” from the victims, while thanking them “for their perseverance and courage, despite the enormous personal, spiritual, social and family difficulties they have had to face, so many times in the midst of the incomprehension and attacks by the ecclesial community itself.”

Before the bishops took leave of the Vatican, the pope had given each of them a letter recalling that their talks had centered on the “short, medium and long-term” changes that must be made to restore justice and church unity.

The text was short on details and obviously intended primarily for public consumption. But it noted that the meetings had concluded with “the firm intention to repair the damage done.”

Now the question is the timing of the changes. Is it possible or even necessary to prematurely replace every single bishop in Chile, either immediately or down the road?

We will have to wait and see.

But one of the two officials that Pope Francis sent to Chile in March to investigate the situation of clergy sex abuse and allegations of a church cover-up said you could bet that some sort of bold action would be taken.

“What’s certain is that we are facing a very, very particular moment for the universal church, not only for Chile,” said Msgr. Jordi Bertomeu, an official at the Congregation for the Doctrine of the Faith.

“It’s not normal to call an entire bishops’ conference (to Rome). Therefore, if I were you, I would expect measures and conclusions that will be important,” the Spanish priest told journalists on Thursday.

“We are making history,” he added.

He sure was right. Mass resignations like this sort have never happened before.

Hours before the bishops issued their declaration, a television network in Chile released details of a private document the pope had given them as they began their discussions in Rome.

In the 10-page document Francis accused the bishops of destroying evidence of sex abuse and “grave negligence” in protecting youngsters from predator priests.

In the text, which the Vatican confirmed as being authentic, the pope expressed outrage over “the destruction of compromising documents on the part of those in charge of ecclesiastic archives.”

He said it showed “an absolute lack of respect for the canonical process and worse, reprehensible practices that must be avoided in the future.”

Given the contents of this document, it is not hard to deduce that the pope had some very tough words for the bishops during the meetings in Rome. And in light of this, it is not surprising that they have all submitted their resignations.

Eventually, one of them will probably reveal whether they decided to jump or if they were pushed.

One of the key aims of Pope Francis’ “attitude adjustment program” these past five years has been to free Catholicism from its obsession with the church’s bureaucratic center in Rome and to give priority to the “peripheries” as the main focus of attention and pastoral action. But it is apparent that many Roman Curia officials are finding it difficult to make the transition.

Two new Vatican documents that were released this week highlight the problem.

The first was an “instruction” from the Congregation for Institutes of Consecrated Life and Societies of Apostolic Life (CICLSAL) intended to help monasteries of cloistered nuns implement some minor reforms to their way of life, which the pope spelled out in 2016 through an apostolic constitution.

The new document (originally written in Italian) bears the Latin title Cor orans (praying heart), though there actually exists no translation in what was once considered the Western Church’s official language.

In fact, when the “implementing instruction,” as it is strangely called, was presented to journalists last Tuesday it existed only in Italian and Spanish.

Remember, this is a document of considerable weight intended for contemplative nuns throughout the world. One would have the impression they all live in Italy, Spain and Latin America.

However, shortly after the press launch was over the Vatican also released an English version of the text. It is of questionable quality, to put it charitably.

Cor orans begins with this poorly constructed sentence: “Praying heart, guardian of gratuity, wealth of apostolic fruitfulness and of a mysterious and multiform holiness is the feminine contemplative life in the Church.”

The authors obviously believe it was necessary to begin with the title of a Latin text that does not even exist.

When La Croix’s Rome correspondent Nicolas Senèze politely asked when translations in the world’s other major languages (including French) would be released, the CICLSAL secretary, Archbishop José Rodriguez Carballo OFM, said there were always “little problems” with producing translations.

The archbishop, a former international head of the largest branch of male Franciscans, acknowledged there were many and important monasteries of contemplative nuns in France and francophone Africa.

“The French translation will be out as soon as possible,” he said.

Why the delay? Cor orans was dated April 1, but was already finished by March 16 when it was presented to Pope Francis for his approval.

The other new document — Oeconomicae et pecuniariae quaestiones (Considerations for an Ethical Discernment Regarding Some Aspects of the Present Economic-Financial System) — came out on Thursday. It is a joint effort by the Congregation for the Doctrine of the Faith (CDF) and of the Dicastery For Promoting Integral Human Development.

While it is an important text that more forcefully states Catholic social teaching regarding the downside of unbridled capitalism, the English version of the text further underscores the uneven quality of Vatican translations.

Journalists were given embargoed copies of the document in six languages (sorry, no Latin) at 8:00 a.m. in order to prepare for the 11:00 a.m. publication and presentation of the text by CDF prefect, Archbishop Luis Ladaria SJ, and the head of the human development dicastery, Cardinal Peter Turkson. But at 9:51 a.m. the Holy See Press Office issued a new English version.

Evidently, in the span of less than two hours, Vatican officials were alerted to the unsuitability of the first translation. Unfortunately, the one that replaced it was not much better. It is cluttered with grammatical errors, clunky phrases, dubious renderings of terms and faulty citations.

Some of the quotes from previous papal documents do not even match the official translations of those earlier texts as they appear on the Vatican website. And there are even references to specific paragraphs of those texts, probably by mistake, that have little to do with the particular points they are meant to support.

But don’t fret. There is a solution to better understanding the Vatican’s lingo. Just take a crash course in Italian. And then all will not be lost — except, perhaps, in translation.

This article was first published by La Criox International on the 18th of May, 2018. It was written by Robert Mickens.

Robert Mickens, LCI Editor in Chief, has lived, studied and worked in Rome for 30 years. Over that time he has studied at the Gregorian University, worked at Vatican Radio and been the Rome correspondent for the London Tablet. He regularly comments on CNN, the BBC and the Australian Broadcasting Corporation. His famous Letter From Rome, brings his unparalleled experience as senior Vatican correspondent for the London Tablet and founding editor of Global Pulse Magazine.