ROHAN FOX, MATTHEW DORNAN. China in the Pacific: Is China engaged in “debt-trap diplomacy”? A repost from November 12 2018

Recent media coverage has touted the rise of Chinese aid and lending as a threat to Pacific nations’ sovereignty and to the West’s influence in the Pacific. China, so the narrative goes, is aggressively lending to smaller nations who do not have the capacity to pay back the loans. Some commentators have even described such lending as “debt-trap diplomacy”, implying that lending forms part of an intentional strategy by the Chinese state to pressure Pacific island governments….Debt is a problem in the region and one that appears to be increasing in importance. But for most countries it is not debt to China that is of concern. Keep that in mind next time you hear that the Pacific is drowning in China debt.

This article was published by Development Blog, ANU Crawford School of Public Policy on the 8th of November 2018.

Political discussion in Australia seems to have shifted up a gear in response. As Foreign Minister, Julie Bishop made clear that she wanted Australia to continue to be the region’s “partner of choice”.  And just last week, Labor leader Bill Shorten announced that a Labor government would set up an Australian Pacific infrastructure investment bank – an announcement he also framed in terms of Australia’s status as “partner of choice”.

But is it fair to claim that China is engaged in “debt-trap diplomacy” in the Pacific?

Most advocates of this argument have pointed to anecdotal evidence – high debt levels in Tonga, the case of the Hambantota port in Sri Lanka – rather than to hard data. In this piece, we look at international debt data to explore: (i) whether Pacific island countries are in debt distress, and (ii) whether this is the result of lending from China. 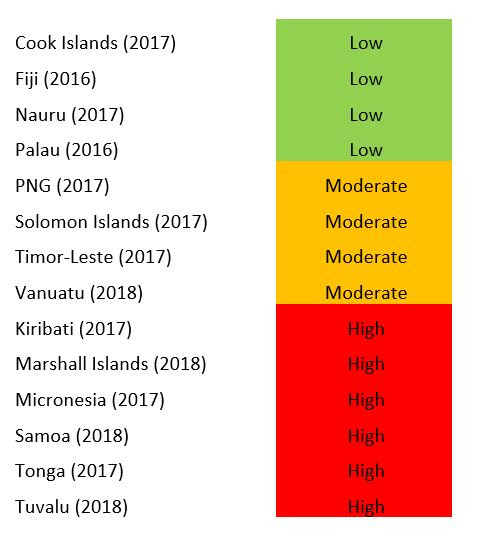 Now for the second question: is this debt distress the result of lending by China?

The short answer is “no”.

Although it is the largest bilateral lender, Chinese lending comprises less than half of lending in any single country, with the exception of Tonga. In fact, half of those countries in the “high risk” category do not even recognise China (PRC), meaning they have no access to Chinese concessional finance (they instead have a relationship with Taiwan). China has also provided significant sums to countries where debt is not an issue (i.e. to countries classified as being at “low risk” of debt distress).

Let’s look at lending to the region in more detail.

China holds around 12% of the total debt owed by Pacific nations, or US $1.3 billion out of US $11.2 billion in debt in the years in question (see Figure 3). Australia does not feature in this graph, as currently all its aid is given as grants rather than concessional loans – though it does contribute to multilateral funds that are lent to the region (e.g. by the World Bank).

Aggregate figures for the region are driven by Papua New Guinea and Fiji, the economies of which dwarf the rest of the Pacific. Borrowing by these two countries alone makes up 88% of the region’s total debt. However, in both countries, domestic debt dominates government borrowing – something that is explained in part by the activities of domestic pension funds

Figure 3: Break up of national debt owed, by lender

It is only in Tonga, Samoa and Vanuatu that Chinese lending comprises over one-third of total debt. In Samoa, lending by the multilateral development banks has been greater than lending by China. In Vanuatu, which is not at high risk of debt distress, the rise in debt to China is a recent phenomenon – and if government statements are anything to go by, appears to have come to an end.

That leaves Tonga as the only country where the “debt-trap diplomacy” narrative has some basis. Tonga is in a high level of debt distress, and Chinese lending dominates – the result of two large concessional loans provided by China Eximbank in 2008 and 2010.

However, anyone with knowledge of how those loans came about would argue that the Chinese state-centric “debt-trap diplomacy” narrative is a far stretch (see a 2014 article by Matt Dornan and Philippa Brant for a detailed description). The first loan came about in exceptional circumstances: the 2006 Nuku’alofa riots had destroyed a good portion of the CBD, and the government wanted to fund rapid reconstruction. The second loan for road re-development was driven by political machinations: MPs from outside of Nuku’alofa sought to attract loan-financed spending in their electorates outside of the CBD. In the background, (for-profit) Chinese construction firms which would implement the projects sought to ensure that both loans went ahead. In other words, the Chinese state did not drive either loan. In fact, given current tensions resulting from their repayment (the Tongan PM has made various contradictory remarks on the subject), it would be fair to argue that the loans have come to pose a headache for Chinese engagement with Tonga.

What can we conclude? Our analysis of debt in the Pacific strongly suggests that the “debt-trap diplomacy” argument is without foundation. Debt is a problem in the region, and one that appears to be increasing in importance. But for most countries it is not debt to China that is of concern. Keep that in mind next time you hear that the Pacific is drowning in Chinese debt.

Rohan Fox is a Research Officer at the Development Policy Centre and holds a Masters in International Development Economics from ANU. He was formerly a lecturer in economics at the University of Papua New Guinea.

Matthew Dornan is Deputy Director of the Development Policy Centre.  He heads our program of research into Pacific development.  His research focuses on aid flows, regional integration, energy and broader infrastructure challenges in the Pacific Islands region.  Matthew has a PhD from ANU, and previously worked for the Australian aid program in the Pacific.