Russia should shrink from Morrison’s dressing down!! 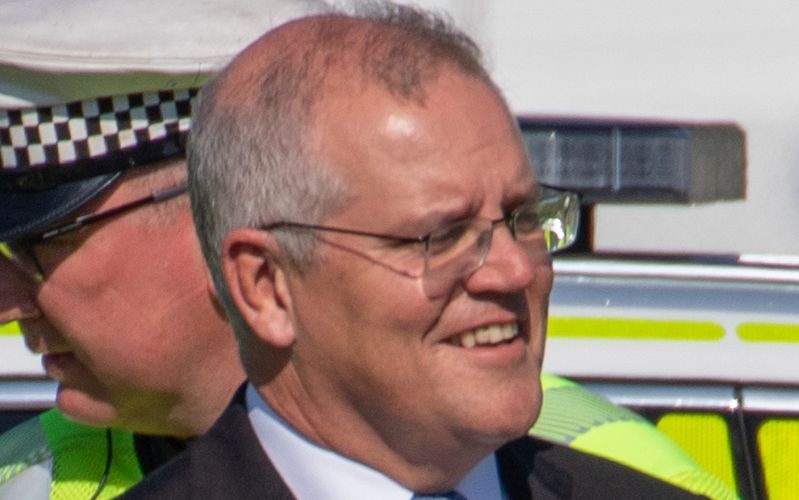 I doubt that Putin lost a great deal of sleep this week from the fierce denunciations of his invasion of parts of Ukraine by Australia’s prime minister, Scott Morrison. (Image: Flickr / stephen fitz-gibbons)

When Vladimir Putin braved the risk of being shirtfronted by Tony Abbott to come to Australia for the G20 summit, a journalist asked him “What do you think of Australia?

“I never think of Australia,’’ the great horseman responded. It was a cruel blow to our national pride, given the influence of Russian affairs on Australian history. We spent much of the later part of the 19th century regarding Russia as a likely invader. On that account there are still cannon at Watson’s Bay in Sydney and at Port Phillip Bay, designed to repel Russian boarders. Putin’s hero, Vladimir Lenin wrote learnedly in 1913 on the results of an Australian election more than 100 years ago, before concluding that the idea that the Australian Labor Party was socialist or a potential menace to capitalism was a joke. In another of his polemics he called for one of his ideological enemies, Karl Kautsky to be put in a cage and exhibited alongside the Australian kangaroo.

Putin was also obviously unaware that Australian soldiers had invaded Russia, at Archangel in the North, in Ukraine, still part of Russia, and in Siberia, 103 years ago, as a part of British forces against the Bolsheviks during the Russian Civil War. Our forces included at least four navy vessels operating in the Black Sea, sometimes from Sevastopol. Two Australians won Victoria Crosses. To be fair to Putin, few people in Australia, even at the time, knew of our involvement. We left in early 1920 without having made much difference, and not many of the engagements would figure in the Russian official histories. Twenty years later, we were sending sheepskins to clothe Soviet soldiers fighting the Germans, eucalyptus seedings for re-afforestation, and after the war, a place of refuge for many displaced people — a substantial majority of whom proved to be fiercely anti-communist.

I doubt that Putin lost a great deal of sleep this week from the fierce denunciations of his invasion of parts of Ukraine by Australia’s prime minister, Scott Morrison. He ought to have met Morrison at more recent G-20 meetings, though it is possible that our prime minister made no more impact on his consciousness than he did on the German Chancellor, Angela Merkel or the American President, Joe Biden, both of whom had to be reminded of his name.

This was not for want of strident assertion of Australia’s interests, at least as interpreted by Morrison. But the volume of our international declarations is in inverse proportion to the distance of the receiving capital from Hobart, particularly when the subject concerns things happening on the other side of the world. Scott Morrison tore strips off Russia, and it will be a long time before the Bear dares skulk back into his presence, assuming Morrison’s prime ministership survives the May election.

Thank heavens for Morrison, because he was getting little help from his foreign minister, Marise Payne, whose “quiet diplomacy” went largely unheard and who attended many meetings in Europe without earning her travel allowance. Her silence sits alongside the fact that other statespeople and diplomats are never much interested in anything she (or for that matter, Scott Morrison) has to say. What is said, usually, will echo, or sometimes eagerly anticipate, the US or Britain, even when our own interests, or perspective from a hemisphere away ought to be different. As it happens, long and concerned meetings  of our national security cabinet were able to produce a sanctions package against Russia that is almost identical to, if slightly weaker, than that of Britain. That is, when it comes into operation, because Australia has given everyone affected ample time to make other arrangements.

Some think there is a general principle in the conduct of Australian foreign policy, on both sides of the political divide, that one can be the more strident the further the recipient is away, the less there is at stake and the smaller the intention of actually doing anything to back up one’s fighting words. It might be said to follow the maxim of Neville Chamberlain after his betrayal of Czechoslovakia during the 1938 Munich Crisis: “How horrible, fantastic, incredible it is that we should be digging trenches and trying on gas-masks here [in Britain] because of a quarrel in a far-away country between people of whom we know nothing!”

On this account, politicians are mostly more interested in and knowledgeable about what is happening in Britain than among any of our neighbours, including China, Korea, Japan and India. Leftists expel each other over different attitudes to Israel, or once, Russia, Timor-Leste and the Baltic states. Once the right wing of the Liberal Party was united only around unswerving support for South Africa, fanatical support for Rhodesia, which is to say white supremacy. Now some are in thrall to Trumpism.

One can be derisive about the noisy resolution of Morrison, and his efforts to craft the Ukraine crisis into the narrative about Anthony Albanese being too weak and inexperienced to be put in charge during this crisis. After all, there is nothing — not one thing — that Australia is saying or doing, even in the way of sanctions, which will have the slightest impact on the determination of Putin. If sanctions are to have any effect in reversing or bringing the invasion to a halt, Australia’s contribution is as a piece of string in the thick rope intended to strangle Putin, perhaps literally.

We could do more if we wanted. The Australian economy is about 87 per cent the size of Russia’s even if Russia has a landmass twice as big, a population six times the size, a defence budget (only) twice Australia’s, an armoury of nuclear weapons, nuclear missiles, ships and submarines, which could easily overwhelm Australia. That is, if it ever occurred to Vladimir Putin, who does not have us high on his list of priorities.

But if Australia has little capacity to affect outcomes, even as a loyal ally of the west, we have good reason to think that an invasion of Ukraine could affect its vital interests, regardless of the depth of Putin’s spiritual attachment to a country that was a creation of the Soviet Union, without a long history of independence from Russia.

The best examples are ones of cold realism, having little to do with the unalienable rights of self-government and freedom of alliance of Ukraine citizens. War in Ukraine has the potential to get very nasty, and very quickly.

Although the western neighbours seem determined that only Ukraine blood be shed in defence of its freedom, they are eagerly supplying munitions, missiles, and intelligence designed to do maximum damage to the Russians, just as  the US supplied weapons to its friend Osama bin Laden and the mujaheddin when Russia invaded Afghanistan. Or, for that matter, when Russia supplied military services to the Syrian regime so as to defeat an American intervention designed to cause regime change in the last decade.

The western strategy is based on deep doubts about whether Ukraine can survive, and determination not to be there when the balloon goes up on that . But it hopes its supplies and assistance can prolong the conflict and bleed the Russian effort. America hopes Russia will end up in the sort of quagmire that US and NATO interventions in Iraq and Afghanistan were in over the past two decades.