Russian and US parallel pathways to a nuclear conflict 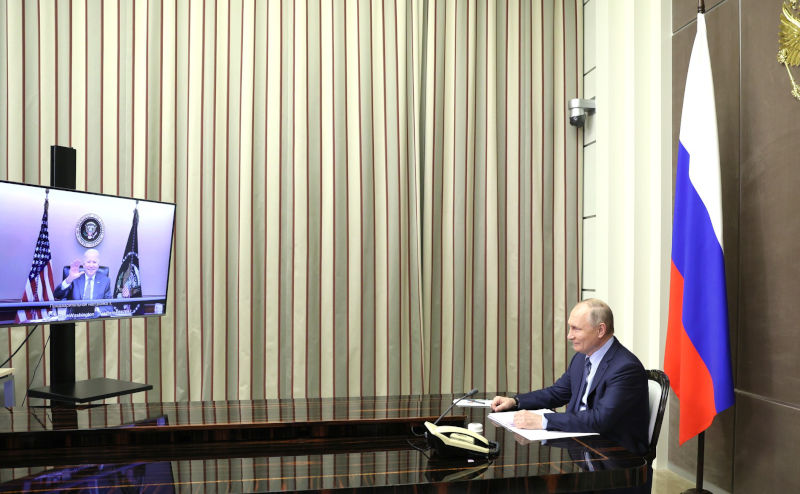 The risk of a war that neither side wants lies more in the possibility of miscommunication. Image: Wikimedia Commons

Biden escaped rigorous critical scrutiny that is the normal lot of presidential campaigns with the help of major media and Big Tech platforms that despised Trump. The world is now discovering just how grave the real-world consequences can be when reality bites back.

In the 2020 election, President Donald Trump’s supporters looked beyond manifest character flaws to domestic and foreign policy results but opponents couldn’t overlook his character to assess any policy achievements. Joe Biden became president as much because Americans voted against Trump as for Biden. The buyers’ remorse evident in opinion polls suggests that perhaps voters should have been careful what they wished for.

In an op-ed in The New York Times on 18 April 2017, Antony Blinken wrote: ‘It’s one thing for a foreign partner to doubt a president’s judgment; it’s entirely more debilitating when that partner doubts the president’s word’. Now that he is Secretary of State, we can but wonder about Blinken’s private views on Biden’s judgement and word and whether he can be helped to ‘overcome a credibility gap of his own making’.

The first problem, to borrow another Blinken phrase about Trump, is Biden’s ‘challenged relationship with veracity’. Biden’s serial fabulism is legendary. He invented stories about being arrested in apartheid South Africa during a trip to see Nelson Mandela, marching in the civil rights movement, graduating in the top half of law class, driving an 18-wheeler, chatting with an Amtrak conductor as vice president when that conductor had retired 15 years before Biden became vice president, visiting Pittsburgh’s Tree of Life synagogue after the 2018 massacre, having opposed the Iraq War from the start, etc.

The last example points to a second major problem with the vaunted boasts of foreign policy expertise. Biden opposed the war to liberate Kuwait in 1991, supported the Iraq War in 2003 and counselled President Barack Obama against taking out Osama Bin Laden in 2011. Hence Obama’s brutal assessment not to ‘underestimate Joe’s ability to f..k things up’, backed by former Defense Secretary Robert Gates assertion that Biden had been wrong on every major foreign policy and national security issue during his decades-long public life.

Biden escaped rigorous critical scrutiny that is the normal lot of presidential campaigns with the help of major media and Big Tech platforms that despised Trump. The world is now discovering just how grave the real-world consequences can be when reality bites back. This includes the dawning recognition that the prospect of a US–Russia nuclear war is more imaginable today than at any time since the 1962 Cuban missile crisis.

A premeditated nuclear attack is unlikely. Rather, the risk of a war that neither side wants lies more in the possibility of miscommunication, misperception and miscalculation that could see the cycle of provocation and escalation spin out of control. On one side, President Vladimir Putin has been the most criminally irresponsible of all the nine leaders of nuclear-armed states in normalising the discourse of the possession and threats of use of nuclear weapons. On the other side, Biden’s ‘verbal incontinence’ (Gerard Baker) and cognitive impairment could lead to nuclear war through miscommunication or inadvertent launch. The existing US protocol, designed for speed and efficiency, permits the president to launch nuclear weapons with a single verbal order.

Over the past decade, leaders of several nuclear-armed states have engaged in irresponsible nuclear bluster. In May 2016, British Prime Minister (PM) Theresa May said she would be prepared to authorise a nuclear strike that could kill 100,000 people. In December Pakistan’s Defence Minister Khawaja Muhammad Asif threatened a nuclear attack on Israel in response to a fake news story that Israel had threatened Pakistan with nuclear weapons, followed by the tit-for-tat exchange of mutually insulting and belligerent rhetoric by Trump and North Korea’s Kim Jong-un in 2017. In February 2019, Pakistan’s PM Imran Khan warned of the possibility of a nuclear war and India’s Narendra Modi responded in kind.

Even against this backdrop, Putin’s serial nuclear warnings are alarming. After Russia’s annexation of Crimea in 2014, facing hostile Western criticism, he pointedly remarked, ‘Russia is one of the most powerful nuclear nations’. When President Trump insisted in February 2017 that the US would stay at the ‘top of the [nuclear] pack’, Putin spoke of the need to do the same with Russia’s deterrent. In March 2018, Putin boasted of a new array of invincible nuclear weapons. On 19, 23 and 27 February, respectively, he conducted a dress-rehearsal of Russia’s ballistic missile forces, warned of nuclear war and very publicly put Russia’s nuclear deterrent forces on ‘special alert’. When the message was still not received in Washington, on 29 March, after a Kremlin spokesman said Russia would use nuclear weapons if it confronted an ‘existential threat’, The Daily Mail (UK) reported that Putin and his high command were already ensconced in top secret nuclear bunkers. The aim may have been simply to add urgency to the nuclear signalling. A perverse consequence for Russia, considering that NATO’s eastward expansion has been the primary justification for the aggression, is that US nuclear weapons could end up being stationed in Poland on Russia’s western and in Japan on its eastern flanks, among other places.

For his part, during his recent European trip to rally allies and boost Ukrainian resolve, Biden dropped three dangerous clangers. Asked at a press conference in Brussels on the 24th about Russia using chemical weapons in Ukraine, he said ‘it would trigger a response in kind’. Addressing US troops in Poland the next day, he suggested US soldiers would be going to Ukraine and some were already there. In a speech in Warsaw on the 26th, he called for regime change in Russia, saying ‘For God’s sake, this man cannot remain in power’. This could only feed Putin’s paranoia and make it easier to discredit domestic critics of the war. It triggered a furious response from Moscow and refutations from his own senior officials and allied leaders. If Biden’s three statements were gaffes, it’s worrying. If they were not gaffes, it’s a frightening reminder of the risk of a gaffe-strewn road to nuclear war. Afterwards, he was caught responding to reporters’ regime-change questions by hewing closely to a prepared ‘cheat sheet’ to stop him straying off script.

It was clear from the start, given the level of details on provenance and content provided by the New York Post, that the Hunter Biden laptop scandal was authentic. Now that even the New York Times has conceded that, the next key question becomes: what does this tell us about the implications of the president’s possible involvement in shady deals with China, Russia and Ukraine, all three of which are central to how the current crisis plays out? One can admire President Volodymyr Zelensky’s unexpected demonstration of heroic leadership without ignoring the ugliness of Ukraine. In Transparency International’s 2021 corruption index published on 25 January, Ukraine’s score was 32/100 with a rank of 122/180 countries, making it Europe’s most corrupt country bar none. The EU average score is 66/100.

For over two decades Russia has signalled redlines over Ukraine that the West simply brushed aside. This is one explanation for why the anti-Russian consensus on Ukraine is localised to the West and not global, as Edward Luce notes in the Financial Times. Shivshankar Menon, India’s former National Security Adviser (2010–14), writes in Foreign Affairs that Russia’s war in Ukraine will transform Europe’s geopolitical landscape but is not a transcendental conflict between autocracies and democracies, will not reshape the global order and has only limited relevance for the Indo-Pacific. China’s continued rise is far more consequential for reconfiguring the emerging global order on both the geopolitical and normative axes than the last gasps of the Russian empire. Where is the line between immoral appeasement and prudent realism in encouraging Ukraine to seek accommodation with Russia, on terms that we might yet end up with in regard to Crimea, the Donbas and some sort of a neutral status with credible security guarantees for Ukraine?

Ramesh Thakur, a former UN assistant secretary-general, is emeritus professor at the Australian National University, Senior Research Fellow at the Toda Peace Institute, and Fellow of the Australian Institute of International Affairs. He is the editor of The nuclear ban treaty: a transformational reframing of the global nuclear order.

This article of 7 April,2022  is posted with permission from the Toda Peace Institute