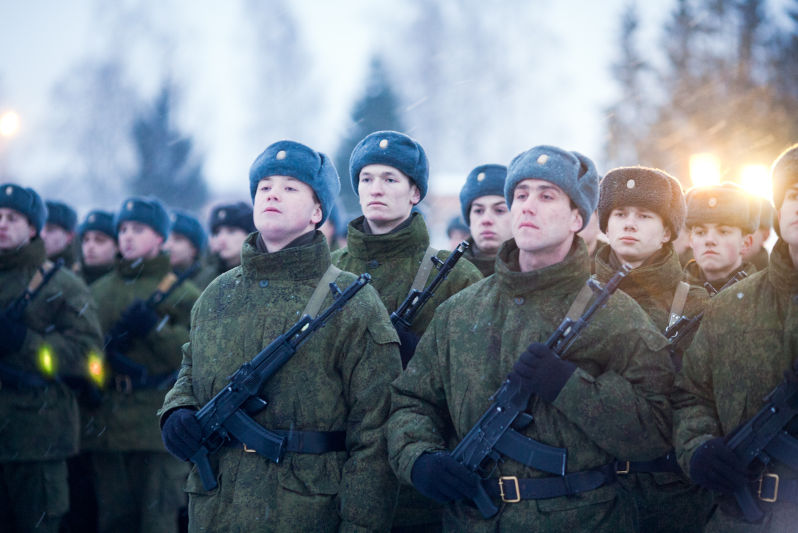 In Washington, wide agreement exists that the Russian army’s performance in the Kremlin’s ongoing Ukraine “special military operation” ranks somewhere between lousy and truly abysmal. The question is: Why? The answer in American policy circles, both civilian and military, appears all but self-evident.

Vladimir Putin’s Russia has stubbornly insisted on ignoring the principles, practices, and methods identified as necessary for success in war and perfected in this century by the armed forces of the United States. Put simply, by refusing to do things the American way, the Russians are failing badly against a far weaker foe.

Granted, American analysts — especially the retired military officers who opine on national news shows — concede that other factors have contributed to Russia’s sorry predicament. Yes, heroic Ukrainian resistance, reminiscent of the Winter War of 1939-1940 when Finland tenaciously defended itself against the Soviet Union’s more powerful military, caught the Russians by surprise. Expectations that Ukrainians would stand by while the invaders swept across their country proved wildly misplaced. In addition, comprehensive economic sanctions imposed by the West in response to the invasion have complicated the Russian war effort. By no means least of all, the flood of modern weaponry provided by the United States and its allies — God bless the military-industrial-congressional complex — have appreciably enhanced Ukrainian fighting power.

Still, in the view of American military figures, all of those factors take a backseat to Russia’s manifest inability (or refusal) to grasp the basic prerequisites of modern warfare. The fact that Western observers possess a limited understanding of how that country’s military leadership functions makes it all the easier to render such definitive judgments. It’s like speculating about Donald Trump’s innermost convictions. Since nobody really knows, any forcefully expressed opinion acquires at least passing credibility.

* First, the Russians don’t understand jointness, the military doctrine that provides for the seamless integration of ground, air, and maritime operations, not only on Planet Earth but in cyberspace and outer space;

* Second, Russia’s land forces haven’t adhered to the principles of combined arms warfare, first perfected by the Germans in World War II, that emphasises the close tactical collaboration of tanks, infantry, and artillery;

* Third, Russia’s longstanding tradition of top-down leadership inhibits flexibility at the front, leaving junior officers and noncommissioned officers to relay orders from on high without demonstrating any capacity to, or instinct for, exercising initiative on their own;

* Finally, the Russians appear to lack even the most rudimentary understanding of battlefield logistics — the mechanisms that provide a steady and reliable supply of the fuel, food, munitions, medical support, and spare parts needed to sustain a campaign.

Implicit in this critique, voiced by self-proclaimed American experts, is the suggestion that, if the Russian army had paid more attention to how U.S. forces deal with such matters, they would have fared better in Ukraine. That they don’t — and perhaps can’t — comes as good news for Russia’s enemies, of course. By implication, Russian military ineptitude obliquely affirms the military mastery of the United States. We define the standard of excellence to which others can only aspire.

Reducing war to a formula

All of which begs a larger question the national security establishment remains steadfastly oblivious to: If jointness, combined arms tactics, flexible leadership, and responsive logistics hold the keys to victory, why haven’t American forces — supposedly possessing such qualities in abundance — been able to win their own equivalents of the Ukraine War? After all, Russia has only been stuck in Ukraine for six months, while the U.S. was stuck in Afghanistan for 20 years and still has troops in Iraq almost two decades after its disastrous invasion of that country.

Perhaps written off is too harsh. After all, when the U.S. military fails to meet expectations, there are always some who will hasten to point the finger at civilian leaders for screwing up. Certainly, this was the case with the chaotic U.S. military withdrawal from Afghanistan in August 2021. Critics were quick to pin the blame on President Biden for that debacle, while the commanders who had presided over the war there for those 20 years escaped largely unscathed. Indeed, some of those former commanders like retired general and ex-CIA Director David Petraeus, aka “King David,” were eagerly sought after by the media as Kabul fell.

So, if the U.S. military performance since the Global War on Terror was launched more than two decades ago rates as, to put it politely, a disappointment — and that would be my view — it might be tempting to lay responsibility at the feet of the four presidents, eight secretaries of defence (including two former four-star generals), and the various deputy secretaries, undersecretaries, assistant secretaries, and ambassadors who designed and implemented American policy in those years. In essence, this becomes an argument for sustained generational incompetence.

There’s a flipside to that argument, however. It would tag the parade of generals who presided over the wars in Afghanistan and Iraq (and lesser conflicts like those in Libya, Somalia, and Syria) as uniformly not up to the job — another argument for generational incompetence. Members of the once-dominant Petraeus fan club might cite him as a notable exception. Yet, with the passage of time, King David’s achievements as general-in-chief first in Baghdad and then in Kabul have lost much of their luster. The late “Stormin’ Norman” Schwarzkopf and General Tommy Franks, their own “victories” diminished by subsequent events, might sympathise.

Allow me to suggest another explanation, however, for the performance gap that afflicts the twenty-first-century U.S. military establishment. The real problem hasn’t been arrogant, ill-informed civilians or generals who lack the right stuff or suffer from bad luck. It’s the way Americans, especially those wielding influence in national security circles, including journalists, think tankers, lobbyists, corporate officials in the military-industrial complex, and members of Congress, have come to think of war as an attractive, affordable means of solving problems.

Military theorists have long emphasised that by its very nature, war is fluid, elusive, capricious, and permeated with chance and uncertainty. Practitioners tend to respond by suggesting that, though true, such descriptions are not helpful. They prefer to conceive of war as essentially knowable, predictable, and eminently useful — the Swiss Army knife of international politics.

Hence, the tendency, among both civilian and military officials in Washington, not to mention journalists and policy intellectuals, to reduce war to a phrase or formula (or better yet to a set of acronyms), so that the entire subject can be summarised in a slick 30-minute slide presentation. That urge to simplify — to boil things down to their essence — is anything but incidental. In Washington, the avoidance of complexity and ambiguity facilitates marketing (that is, shaking down Congress for money).

To cite one small example of this, consider a recent military document entitled

“Army Readiness and Modernisation in 2022,” produced by propagandists at the Association of the United States Army, purports to describe where the U.S. Army is headed. It identifies “eight cross-functional teams” meant to focus on “six priorities.” If properly resourced and vigorously pursued, these teams and priorities will ensure, it claims, that “the army maintains all-domain overmatch against all adversaries in future fights.”

Set aside the uncomfortable fact that, when it counted last year in Kabul, American forces demonstrated anything but all-domain overmatch. Still, what the Army’s leadership aims to do between now and 2035 is create “a transformed multi-domain army” by fielding a plethora of new systems, described in a blizzard of acronyms: ERCA, PrSM, LRHW, OMVF, MPF, RCV, AMPV, FVL, FLRAA, FARA, BLADE, CROWS, MMHEL, and so on, more or less ad infinitum.

Perhaps you won’t be surprised to learn that the Army’s plan, or rather vision, for its future avoids the slightest mention of costs. Nor does it consider potential complications — adversaries equipped with nuclear weapons, for example — that might interfere with its aspirations to all-domain overmatch.

Yet the document deserves our attention as an exquisite example of Pentagon-think. It provides the Army’s preferred answer to a question of nearly existential importance — not “How can the Army help keep Americans safe?” but “How can the Army maintain, and ideally increase, its budget?”

Hidden inside that question is an implicit assumption that sustaining even the pretence of keeping Americans safe requires a military of global reach that maintains a massive global presence. Given the spectacular findings of the James Webb Telescope, perhaps galactic will one day replace global in the Pentagon’s lexicon. In the meantime, while maintaining perhaps 750 military bases on every continent except Antarctica, that military rejects out of hand the proposition that defending Americans where they live — that is, within the boundaries of the 50 states comprising the United States — can suffice to define its overarching purpose.

And here we arrive at the crux of the matter: militarised globalism, the Pentagon’s preferred paradigm for basic policy, has become increasingly unaffordable. With the passage of time, it’s also become beside the point. Americans simply don’t have the wallet to satisfy budgetary claims concocted in the Pentagon, especially those that ignore the most elemental concerns we face, including disease, drought, fire, floods, and sea-level rise, not to mention averting the potential collapse of our constitutional order. All-domain overmatch is of doubtful relevance to such threats.

To provide for the safety and well-being of our republic, we don’t need further enhancements to jointness, combined arms tactics, flexible leadership, and responsive logistics. Instead, we need an entirely different approach to national security.

Given the precarious state of American democracy, aptly described by President Biden in his recent address in Philadelphia, our most pressing priority is repairing the damage to our domestic political fabric, not engaging in another round of “great power competition” dreamed up by fevered minds in Washington. Put simply, the Constitution is more important than the fate of Taiwan.

I apologise: I know that I have blasphemed. But the times suggest that we weigh the pros and cons of blasphemy. With serious people publicly warning about the possible approach of civil war and many of our far-too-well armed fellow citizens welcoming the prospect, perhaps the moment has come to reconsider the taken-for-granted premises that have sustained U.S. national security policy since the immediate aftermath of World War II.

More blasphemy! Did I just advocate a policy of isolationism?

Heaven forfend! What I would settle for instead is a modicum of modesty and prudence, along with a lively respect for (rather than infatuation with) war.

Here is the unacknowledged bind in which the Pentagon has placed itself — and the rest of us: by gearing up to fight (however ineffectively) anywhere against any foe in any kind of conflict, it finds itself prepared to fight nowhere in particular. Hence, the urge to extemporise on the fly, as has been the pattern in every conflict of ours since the Vietnam War. On occasion, things work out, as in the long-forgotten, essentially meaningless 1983 invasion of the Caribbean island of Grenada. More often than not, however, they don’t, no matter how vigorously our generals and our troops apply the principles of jointness, combined arms, leadership, and logistics.

Americans spend a lot of time these days trying to figure out what makes Vladimir Putin tick. I don’t pretend to know, nor do I really much care. I would say this, however: Putin’s plunge into Ukraine confirms that he learned nothing from the folly of post-9/11 U.S. military policy.

Will we, in our turn, learn anything from Putin’s folly? Don’t count on it.

Andrew Bacevich is the author of America’s War for the Greater Middle East: A Military History, which has just been published by Random House.