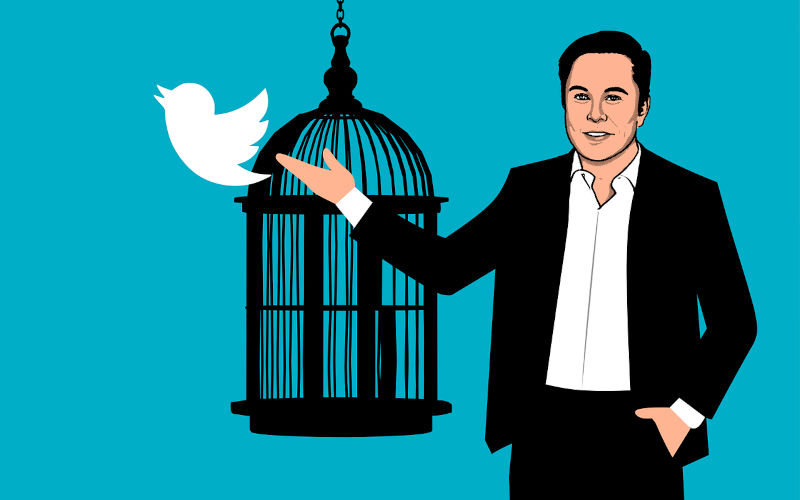 The peculiar evil of silencing the expression of an opinion is that it is robbing the human race. Image: Pixabay

Elon Musk’s takeover of Twitter has sharpened philosophical and epistemic differences over speech and content moderation. He will create an interesting natural experiment between different moderation approaches on platforms, if he is successful in changing the philosophical attitudes at Twitter.

Elon Musk’s agreed takeover of Twitter has inflamed debates about freedom of speech. Musk wants to take Twitter back to its roots as “the free speech wing of the free speech party”. Existing management, by contrast, have responded to government and societal pressures by increasingly moderating content to ensure it is a safe platform and free from misinformation.

The takeover has unlocked a deluge of opinion about free speech. Western liberal societies uphold free speech as an important value. But why? Free speech is actually an uncommon idea across human history and societies across the world today.
Beyond human rights considerations, which are not prominent in current debates, three specific strands of argument favour free speech. These help illuminate the debate and explain the worldviews of Musk and those promoting active content moderation on Twitter (and elsewhere).

A limit to government power

The first argument considers free speech as a brake on authoritarianism. Its logic is admirably simple. Authoritarian governments almost always impose restrictions on the press, on which groups can gather where, on the opinions that can be expressed and will seek to control religious groups. Guaranteeing free speech denies this source of power.

Perhaps the most famous expression of this thinking lies in the First Amendment to the US Constitution. It reads:
“Congress shall make no law respecting an establishment of religion, or prohibiting the free exercise thereof; or abridging the freedom of speech, or of the press; or the right of the people peaceably to assemble, and to petition the government for a redress of grievances.

Notwithstanding its positioning as part of the Bill of Rights, the First Amendment is not primarily concerned with individuals or their rights, but on imposing limits on the power of government.
Concerns about government overreach were baked into the core identity of American colonies. Most original US settlers had just fled government or religious persecution in Europe. The US ‘War of Independence’ was a reaction to what was perceived as a tyrannical British Government.

The US experience was part of a broader movement across many parts of Europe. To simplify, to gain societal peace after the long wars of religion, governments began accepting there were parts of personal lives they would not seek to govern.

A related, but different, justification for freedom of speech is as a foundational principle for effective democratic governance. Judging by his Tweets, this is central to Elon Musk’s concerns:Given that Twitter serves as the de facto public town square, failing to adhere to free speech principles fundamentally undermines democracy. What should be done? Free speech is essential to a functioning democracy. Do you believe Twitter rigorously adheres to this principle?

Musk’s argument applies specifically to modern liberal democracy. In a simple majoritarian democracy, there is no reason to limit the power of government to restrict freedom of speech. Whatever the majority decides is all that matters.

By contrast, modern liberal democracy focuses on broader representation and the legitimacy of power. Its core strength is not efficiency or the ability to make rapid decisions. Instead, it is the promotion of longer term stability by ensuring governments have legitimacy with the public, and poor or unpopular governments can be changed without violence.

Free speech is a strong component of this approach. Central to creating legitimacy is a discussion based approach to making decisions, formally conducted within parliaments and informally in national debate. Legitimacy requires government to engage with the wide range of views expressed by the public. Preventing the views of some from entering the debate, disenfranchises them and undermines legitimacy.

To better reveal the truth

The most famous defence of the freedom of speech comes from JS Mill in On Liberty. Mill’s argument doesn’t appeal to concepts of rights or the nature of government. Instead it is primarily epistemic. It is about how we can achieve knowledge or attain truth. To quote:

The peculiar evil of silencing the expression of an opinion is that it is robbing the human race; … If the opinion is right, they are deprived of the opportunity of exchanging error for truth; if wrong, they lose, what is almost as great a benefit, the clearer perception and livelier impression of truth produced by its collision with error.

Mill warns of two dangers. The first is that, by restricting the freedom of speech, we may prevent something true being communicated. The second is that, even if what is communicated is wrong, we lose the opportunity to better understand what is true through the ensuing debate.

Mill’s argument is founded on a presumption of epistemic humility, or the fallibility of human reasoning. It recognises that what we say and believe might turn out to be wrong. Modern literature on cognitive biases and systematic errors in human thinking add evidence to his view.

Notably, Mill’s more detailed arguments are utilitarian. He accepts that free speech can create harm, but that for society as whole the benefits from free speech outweigh the harms.

Epistemic attitudes and freedom of speech

Mill’s reliance on epistemic humility to support freedom of speech is important. If we are certain that we know what is true, then the arguments for free speech hold less weight. Allowing differing views (which will be wrong) adds nothing to what we know and can only cause harm. For example, I wouldn’t allow someone to tell a child that putting their hand in the fire will only tickle.

A correlation exists between our epistemic attitudes and our acceptance of free speech: the more confident we are in the correctness of our knowledge, the less tolerant we will be of free speech. If we have no idea whether we are right or not, or don’t think we can get it right, we are more likely to be comfortable with different views being expressed. On the other hand, if we are certain we are right, we are less likely to be happy for others to express different views.

Much of the content moderation on Twitter and similar platforms has been focused on removing misinformation (information that is misleading or untrue). This approach presumes a significant epistemic confidence that the moderators have it right. If they do, allowing free speech simply circulates falsehood and increases the risks of harm.

Risks arise when the moderators are not correct. Censoring views where the truth is unknown is authoritarian in effect, if not intent. This has arguably occurred through the pandemic, most notably over the lab leak theory for the origins of Covid.. It aappears to be one of the motivations behind Elon Musk’s take-over of Twitter.

Making the change will take time, as content moderators get their heads around the new approach – assuming they can. So long as the people making moderation decisions feel confident their knowledge is correct, they will see no compelling need to allow greater freedom.

To be successful by his own objectives, Musk’s first step after a takeover might need to be to be compulsory philosophy lessons for Twitter’s content moderators.

Dr Ryan Young is a philosopher and futures analyst with the NSC Futures Hub at ANU.