Geraldine discusses the significant changes in Algeria and Sudan where both leaders have been deposed, with New York Times journalist David D Kirkpatrick;

An update on the state of India (as proposed last week) with Ravi Agrawal, Managing Editor of Foreign Policy magazine, and Amitabh Mattoo, Honorary Director of the Australia India Institute in Delhi, Professor of Disarmament Studies at Jawaharlal Nehru University and Honorary Professor of International Relations at the University of Melbourne;

Military historian Antony Beevor on the 1944 battle of Arnhem (1944) and his book Arnhem;

The first of Saturday Extra’s Election Express with Les Pearson from the Plains Producer based in Balaklava, South Australia and Colin Jackson from the Longreach Leader, Queensland;

There is a notion that both the Coalition and Labor have to cast different messages for voters in Queensland and for voters in Victoria, implying that there is some north-south conservative-liberal gradient. But in a poll conducted by the Australia Institute, covering a range of environmental issues, little evidence for such a divide was found: the majority of Australians across states and political allegiances want strong action on climate change. Less than a third believe that “Strong action on climate change would leave us worse off”.

That is not to suggest Australia is free of regional divisions. Action on climate change will have regional consequences, but its effects can be over-stated. Jarrod Whittaker of the ABC reports on Victoria’s Latrobe Valley, where unemployment is high and where there has been an exodus of young people, but the big hit was privatisation of the power industry which saw 8 400 jobs lost, while closure of the huge Hazelwood Station resulted in only 800 jobs lost.

There is a stronger regional divide in Canada, however. Although nationally Canadians are no less concerned about climate change than Australians, and only 28 per cent are firmly opposed to a carbon tax, Jason Kenney, the newly-elected United Conservative Party premier of Alberta, has promised to abolish the province’s carbon tax. According to an article in The Economist, this division may provide Justin Trudeau a political opportunity to make climate change a major issue in the federal election which must be held by October.

But in Queensland Michelle Landry, the LNP member for Capricornia, seems to be more relaxed about climate change than Alberta’s Kenney, claiming that she doesn’t know how much Adani has donated to her party.The Guardian’spolitical editor Katherine Murphy has published  some figures  to aid her recollection. Since the last election Adani has donated $61 000 to the LNP, $31 000 to One Nation, and $2 000 to Labor (subsequently returned).

Morrison to ban Toyota, Volkswagen and Hyundai from the Australian car market

That’s a mild exaggeration, but it’s in keeping with the spirit of Morrison’s campaign style. The Economisthas an article Big carmakers are placing vast bets on electric vehicles, summarising the plans of all the big car makers. Worldwide there will be a rapid uptake of electric vehicles. Outside Coalition circles that’s not really news, but there are two other developments the article covers: within a few years pure electric vehicles will be displacing hybrids; and because electric vehicles are simple, requiring low volumes for scale economies, there could be many more carmakers in the market.

“In a time of universal deceit the truth is incendiary”

That’s a quote from an article by John Stapleton Australia’s Genius Son, covering Julian Assange’s arrest and the US request that he be extradited. Assange’s “crime” has been to confront the US with its own violations of the law.  His lawyer, Jennifer Robinson, says that the extradition request:

While Stapleton condemns Theresa May (“the worst Prime Minister in UK history”) for her servile compliance with the US, he doesn’t hold back on criticising our own government – including the Labor Government which was in office in 2012 when Assange first sought asylum. Why did the Australian embassy in London not offer him protection, asks Stapelton.

For those interested in the precedents of Assange’s possible extradition, in Truthdig there is a transcript of an interview between Daniel Ellsberg and Journalist Sharmini Peries. Ellsberg says of the US:

This is the first indictment of a journalist and editor or publisher, Julian Assange. And if it’s successful it will not be the last. This is clearly a part of President Trump’s war on the press, what he calls the enemy of the state. And if he succeeds in putting Julian Assange in prison, where I think he’ll be for life, if he goes there at all, probably the first charge against him is only a few years. But that’s probably just the first of many.

And for those interested in the legalities of the case, The Harvard Gazette has a set of three short articles from experts, edited by Harvard staff writer Christina Pazzanese. They cover the question of whether Assange can be described as a “journalist”, and the tactics used by to bring Assange to their country. Yochai Benkler of the Harvard Law School writes “The danger is that the prosecution will use a very narrow, defensible prosecution and hang on it a much broader, looser, and more chilling set of practices that are not distinguishable from simply committing journalism.”

A report card on the You Beaut country

It’s not surprising that researchers at The Grattan Institute want to skip over the next few weeks and start looking at what the priorities should be for the next Commonwealth Government, which is the topic of their Commonwealth Orange Book 2019. As is evident to most Australians, living standards have stagnated, housing is too expensive, we are doing too little on climate change and trust in government is falling. Its calls for tax reforms are generally (but not entirely) in line with Labor’s platform.

It has a large set of indicators on our performance compared with other “developed” countries. One set shows that we have achieved a trifecta of bad electricity outcomes – high carbon intensity, high prices and poor reliability. (Didn’t our government say that our coal-fired generators could ensure low prices and high reliability?) We score well on health outcomes, but on education we’re falling behind the pack. 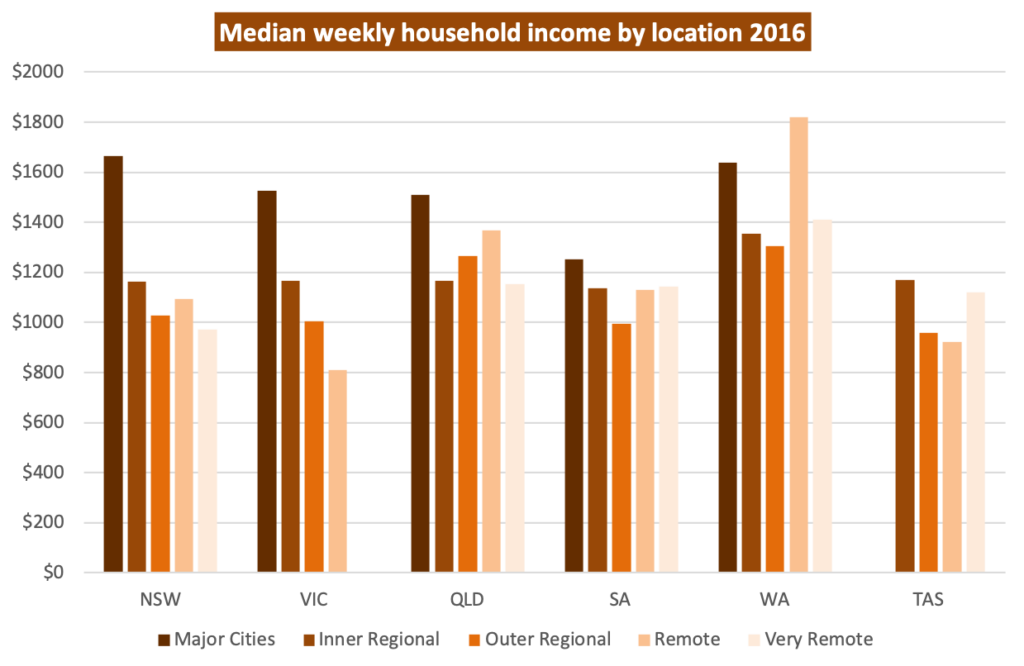 The chart above, constructed from the Grattan data, shows how incomes vary by region on a remoteness scale, and may have something to do with the political disillusionment in the bush: those living in big cities do far better than those in more remote regions.  (Data for Queensland and WA is influenced by the presence of the mining industry.)

Writing in Eureka Street, Devana Senanayke  demolishes the myth that highly-skilled immigrants find it easy to land high-paying jobs. “For many Australian employers, permanent residency and citizenship are prerequisites for securing a job. It is a challenge to land an Australian job as a non-resident and an even greater challenge to keep the job amid a limited visa grant period” she points out.

But perceptions can be a long way from reality. Ghassan Hage writes in The Guardian  on fears of “white” decline. It’s not just the fears of those who are the targets of dog whistles and other prompts by right-wing politicians. He points out that “there is an increasingly available literature portraying people of white European origins as being in a state of decline”. The fear has to do with the fragility of the status “whites” enjoyed in the days of European colonialism.

On a related theme, on the ABC’s Late Night Live  Phillip Adams interviews Richard Cooke, author of  Tired of Winning: A chronicle of American decline. It’s a book about parts of the US with which most Australians are probably unfamiliar. The 16 minute interview commences with anecdotes about Cooke’s experiences in “failing states” – states and regions within states suffering chronic (but not necessarily irreversible) decline – including his attempt to understand the multiple gun cultures of the US. His insightful analysis of the drivers of this decline are towards the end of the interview.

A report card on the Coalition’s economic credentials

Morrison and Frydenberg prattle on about the Coalition’s supposed ability to handle the economy better than Labor, but writing in The Guardian  Greg Jericho goes looking for the evidence, and finds very little. Comparing the current government with previous Labor administrations he finds that on indicators economic growth, labour productivity, real earnings, and household incomes, Australians have generally done much better when Labor has been in office. But as he points out in another article, politicians (particularly Coalition politicians) have found to their benefit that they can get away with lying without the risk of challenge.

Pearls and Irritations is not where one comes for news on day-to-day goings in the casino stock market, but on Wednesday CBS News reported on $US28 billion being wiped off the market value of stocks in health care and health insurers. The panic was in reaction to aspiring Democrat candidate Bernie Sanders’ proposal for “Medicare for all” – essentially a single-payer health insurer similar to the UK, Canadian, and Nordic systems (and as the Labor Party in Australia was committed to in the Whitlam and Hawke Governments). Unsurprisingly the financial press sees such a proposal as catastrophic in terms of the fortunes of for-profit health insurers and health care providers, rather than an exposure of the waste and rip-off in that country’s health care arrangements, resulting from its reliance on private health insurance. That $28 billion is just a small part of the waste.

The ABC has assembled a set of before and after photos  of the Notre Dame Cathedral.  There seems to be little evidence to support the allegation that the blame lies with its twelth century electrical system  (The Onion), or that Apple plans to build a new flagship store  in the cathedral forecourt, integrated with the undamaged parts of the present structure (The Shovel).