Geraldine talks with Wanning Sun, professor of Media and Communication Studies at the University of Technology, Sydney about WeChat and whether it’s a problem for Australia;

Uber begins trading on the New York Stock Exchange in May but there are concerns, including the company’s announcement that it might never make a profit. Rosalina Kariotakis, President of Rideshare Drivers’ Association of Australia and Australian Financial Review columnist John Davidson discuss the implications;

A Foreign Affair guests are Merriden Varrall from KPMG, Greg Fealy form the ANU and Antony Bubalo from Nous consultancy. They discuss the latest news coming out from Saudi Arabia, Slovakian elections and why we should care, Indonesian elections and new hiking trails on the Korean Peninsula;

Australia’s contribution to the 1914-18 War extended beyond the military, with James Waghorne, co-editor of The First World War, the Universities and the professions of Australia, 1914-1939.

The Mueller Report – “a portrait of a morally bankrupt man”

That’s how Robert Reich, writing in The Guardian, summarises the Mueller Report, describing Trump as “the living embodiment of the seven deadly sins – pride, greed, lust, gluttony, wrath, envy and sloth”. Reich’s article can be read as a call for Democrats and progressives to take the moral high ground, which to date has been occupied by right wing evangelists on issues to do with sexual behaviour.

He is not alone in his concerns. In surveys summarised by James Smith on the Harvard Kennedy School website  (Reich was previously a Professor at the Kennedy School) is a finding that an increasing number of Americans are “concerned about the moral direction of the country”, the proportion so concerned having risen from 52 per cent in 2013 to 61 per cent in 2019, and the rise is even stronger among Democrats. The same survey also finds that younger Americans are becoming more politically engaged.

Writing in the New York Review of Books, investigative journalist Murray Waas has been digging through the turgid legal prose of the 448 page Mueller Report, and has found a clearly documented allegation that Trump has acted criminally in obstructing justice in relation to National Security Adviser Michael Flynn’s dealings with the Russian embassy.

And while on the subject of moral bankruptcy, here is a link to a Tru News report of Secretary of State Mike Pompeo on his interpretation of the West Point Code of Honor “Lying, cheating and stealing reminds him of the glory of the American Experiment”.

Back home, reporting on the campaign grinds on, unhindered by morality or public policy

While the Murdoch media remains firmly behind the Coalition, sections of the ABC and other less overtly partisan media seem to be gripped by a desire to appear “balanced”. For example, “balance” seems to require assigning moral equivalence to Shorten’s stumble over a worker feeing aggrieved by possibly having to pay more tax on his $250 000 income and the Coalition having been exposed paying $75 million, without tender, to buy poor quality water from a firm registered in the Cayman Islands. That equivalence was manifest in the ABC Breakfast regular Friday political roundup, which, true to form, focussed on style while avoiding anything to do with morality or public policy.

While ABC journalists keep reminding us of Shorten’s supposed awkwardness over Adani, former Liberal Leader John Hewson, writing in the Fairfax media, points to the real chaos over Adani:

Morrison has got himself in a real mess on climate. While building a platform with lumps of coal, hasty decisions to facilitate the Adani coal project, and hints of perhaps a new coal-fired power plant, he then attempts to speak of his climate-action credentials, offering a packapooticket of policy utterings.

Does virtue inevitably have its own punishment?

One of the right’s new terms is “virtue signalling”. If a well-off self-funded retiree says that he or she is willing to forgo their undeserved tax break on imputation credits for the good of the nation, the result can be an accusation of “virtue signalling” – the notion that such a stance is simply an assertion of self-righteousness. Ross Gittins takes issue with such accusations, pointing out what shouldn’t have to be pointed out: If you’re virtuous, don’t be afraid to signal it to the world. First, people are  altruistic, and second, when we do something virtuous it can set an example to others.

An interest rate cut in time for the election?

The Reserve Bank’s next monthly monetary policy decision on the official interest rate will be announced on 10 May, just before the election. Many commentators are speculating that in light of the ABS report that consumer inflation in the March quarter was zero, the RBA will cut official interest rates. 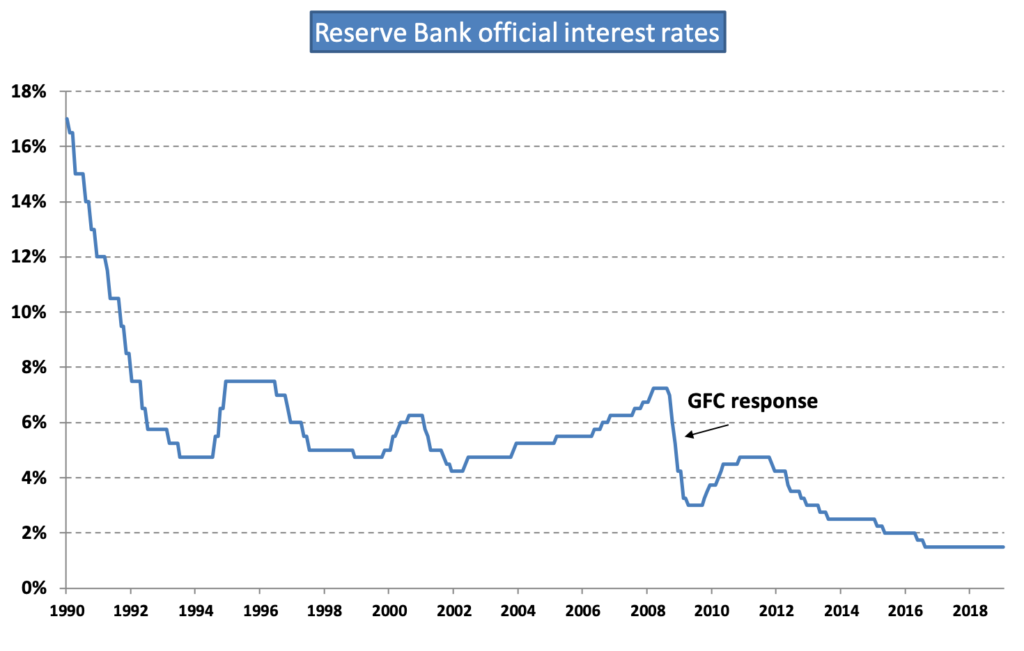 There was a time when such an announcement would be seen as a godsend for a government struggling to be re-elected. (Remember “Interest rates will always be higher under Labor”.) But extremely low inflation is not as good as it sounds, explains the ABC’s Stephen Long. Our low inflation is a sign of a struggling economy, and a cut in interest rates would be confirmation of economic weakness. If the RBA does cut rates, Shorten’s message could well be “The economy will always be weaker under the Coalition”.

Writing in Truthout, Ann Jones presents a review of Thorstein Veblen’s books about the “gilded age” of the late nineteenth century, and the relevance of his findings to Trump’s America. (And by extension to the Australia shaped by Morrison and his cronies.) She reviews his best-known work The Theory of The Leisure Class (1899). In what could be a report on the interests opposing action on climate change, she summarises his finding on the class of people who live off the efforts of others:

Comfortably clueless (or calculating), the wealthy leisure class drags its heels (or digs them in) to retard economic and social forces that make for change. Hence the name “conservatives.” That (re)tardiness — that time lag imposed by conservative complacency — stalls and stifles the lives of everyone else and the timely economic development of the nation.

She also draws attention to two other books by Veblen. One is The Theory of  Business Enterprise  (1904), a study of “the Business Man” :

To Veblen, he was “the Predator” personified: the man who invests in industry, any industry, simply to extract profits from it. Veblen saw that such predators created nothing, produced nothing, and did nothing of economic significance but seize profits.

The other work to which she refers is The Vested Interests and the Common Man  (1920), which summarises Veblen’s life work.

Another political message from the nineteenth century

On the ABC’s Late Night Live  Phillip Adams interviews William Davies, author of Nervous States: How Feelings Took Over the World. Davies outlines the ideas of the nineteenth century French philosopher Gustave Le Bon, who described how crowds’ emotions can be manipulated to mobilise them to follow false prophets – a warning particularly relevant today in an age of rapid dissemination of trolls and fake news. Davies will be coming to Australia for the Sydney Writers’ Festival. (20 minutes)

Stan Grant on identity – is identity a myth?

On the ABC’s Religion and Ethics Report,  Andrew West interviews Stan Grant  on the question of identity. “What happens when your skin colour or religious or political ideology or even your sexual identity becomes more important than character or common values?”, he asks.  Besides addressing that question, Grant takes us through his own personal history and the ideas that have shaped his views, covered in his recent works On Identity  and Australia Day.

A tale of two popes

Pope Francis’s Easter message was directed not only to his own flock, but also to the world, reminding us of the bloody conflicts in Africa, the Middle East and elsewhere. He called for political solutions to these conflicts and an end to the arms races that are heightening tension. Most people, whatever their religious affiliation or inclination, would surely find his address to be inoffensive.  (In the Vatican YouTube clip the address itself starts at 6 minutes and runs for 10 minutes.)

But, as an article in The Economist points out, traditionalists have taken offence at his Easter address, and are contrasting his approach with that of Pope Benedict. On his retirement in 2013 Benedict promised to remain “hidden to the world”, but he has been letting his views be known on various issues and his statements seem to have become a rallying point for conservative Catholics.

Simon and Garfunkel on election darkness

Thanks to one of the readers of Pearls and Wisdom  for telling us of this YouTube video on the coming election, published by  “G Woody”.