Geraldine broadcasts from Perth. WA is one of the states to watch in the federal election.

Young suicides in the Kimberley, with adjunct professor and clinical psychologist Tracey Westerman;

A discussion looking at why WA is such an important state in this election with WA Labor MP Alannah MacTiernan, WA businessman and philanthropist John Poynton and former ABC political reporter for WA, Jessica Strutt;

A walk around the Art Gallery of Western Australia’s exhibition,  Desert, River, Sea: Portraits of the Kimberley with Carly Lane, Curator of Aboriginal and Torres Strait Islander Art.

“Whoever wins government on May 18, there is one certainty: It will be a decidedly more conservative, more neo-liberal and less liberal Liberal Party than the one elected in 2016.”  Michael Pascoe, writing in the New Daily, challenges the Liberal Party’s self-description as a “broad church”. The Party has purged liberals from its ranks, and is still following the divisive and destructive tactics that Abbott developed when he was opposition leader.

The April 30 Essential poll shows the two-party gap between Labor and the Coalition to be closing, but it also shows a continuing poor primary vote for the Coalition – down three percent from 2016 when they just scraped into office. It also shows that 59 per cent of voters expect Labor to win the election. While the Essential Poll, in line with Newspoll, has the two-party split at 51-49, William Bowe’s Poll Bludger, which consolidates data from all the main polls, estimates the split to be more like 51.9 to 48.1. (2 May.)

The ABC reports on a Roy Morgan Poll, conducted for the Australian Futures Project, which shows that by the time the election was called, 76 per cent of voters had decided which party they would vote for.  (The 24 percent undecided would presumably include those tossing up between Labor/Green or One Nation/National Party choices.)

On Wednesday night the ABC’s Leigh Sales  questioned Bill Shorten  about the cost of Labor’s renewable energy policy. Rather than an endeavour to explore the economics of Labor’s policy it was an aggressive “gotcha” form of questioning. Anyone familiar with even the basics of economics would know that such a question does not have a simple single-figure answer.  David Pope, the Canberra Times  cartoonist, uses a historical metaphor to show the absurdity of such questioning. (Pope’s cartoon refers to Churchill: as a more local analogy, we can imagine Leigh Sales asking John Curtin in December 1941 to provide a precise estimate of the cost of defending Australia against Japanese invasion.)

That is a riposte to News Corp’s NSW political editor Andrew Clennell by Alex Turnbull in response to false reports about his political donations. Writing in The Guardian  Amanda Meade  describes a number of fabricated news reports by Australia’s partisan media. 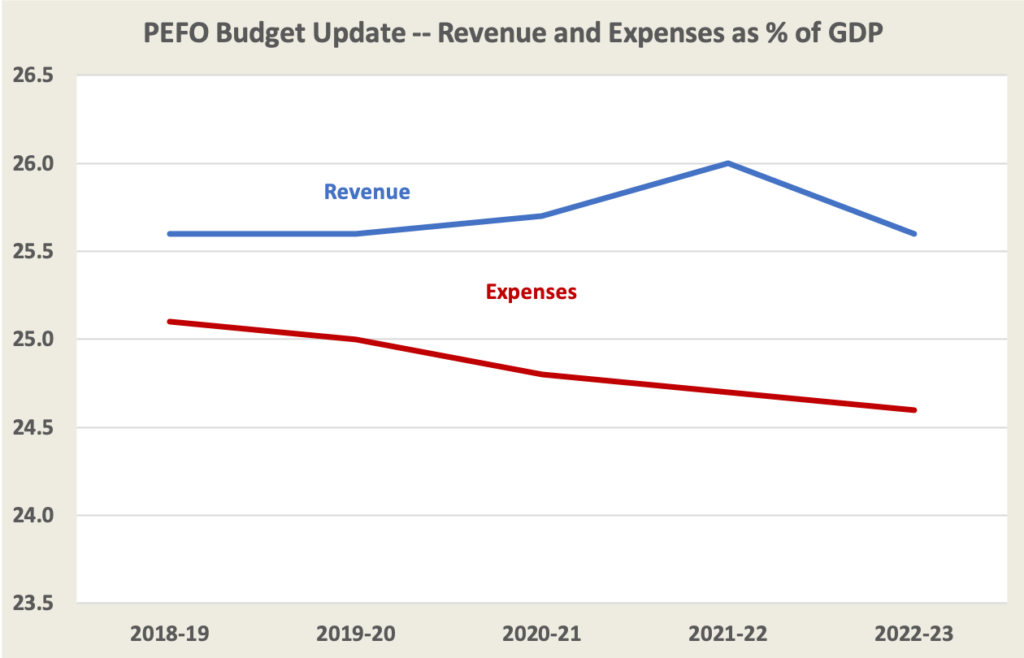 Unless you are a fiscal policy obsessive, you probably missed the Treasury’s Pre-election Economic and Fiscal Outlook, predicting nominal GDP growth this year to be 5.0 percent and substantial growth in real wages. (They must be expecting some extraordinary economic windfall in the last two months of this fiscal year!) And they’re forecasting a growth in the budget surplus funded mainly by cuts in outlays. These are the cuts Morrison and Frydenberg aren’t telling us about, but they’re revealed on the expenses line on the graph.

Ross Gittins, in his article Treasury signs off on budget fantasy forecasts, saves us from having to plod through the PEFO. He reminds us that the Morrison-Frydenberg budget “is calculated to mislead”.

Sex workers are entitled to respect

The media has given a great deal of cover to the salacious details of the alleged behaviour  of former LNP Minister Steve Dickson in a Washington strip club, revealed in the Al Jazeera investigation into One Nation. Gala Vanting, President of Scarlet Alliance (the Australian sex workers’ association), reminds us that “the workers in strip clubs have rights to safety and fair treatment at work”, and that “Mr Dickson’s words and actions reveal how little regard he has for those rights, or the people who hold them”.

What’s going on in Venezuela?

No-one seems to know what’s happening. We have seen footage of the huge anti-Maduro demonstrations, and the government’s brutal response. A team of journalists writing for Bloomberg, in an article about Guaido’s High-Risk Gamble, tries to pull the pieces together.  The consensus seems to be that the Maduro regime is coming apart, but there is no telling how or how long it will hang on, and there is no way to verify the rumours of foreign influence on the two sides in the conflict.

What’s going on in the world

Writing in Club Troppo  Paul Fritjers has an article Six tough institutional challenges this century. His introduction “Let us not bother with small stuff like Brexit or fake news, which are basically historical blips and part of the ongoing theater of politics, but only talk about general challenges to our survival and quality of life” signals that what’s to come is about really big challenges. Most is speculative but well-argued. And although some of his scenarios are scary, he remains “optimistic about this century”.

While most of the media are self-righteously critical of the government for spending $80 million on a water buyback to the benefit of a company registered in the Cayman Islands and with close ties to a Coalition minister, at least one independent media outlet, The Shovel, is prepared to defend the government’s decision.