In championing a budget focused on “wellbeing” New Zealand has signalled a shift in thinking about priorities. Arthur Grimes is a former chief economist for NZ’s Reserve Bank and is now Professor of Wellbeing and Public Policy at Victoria University. He joins Saturday Extra  to discuss the pros and cons of his country’s initiative.

The US’s attack on China over trade is the wrong war, fought in the wrong way, on the wrong terrain. The Financial Times’  Martin Wolf pulls no punches in his latest column about the trade war.

Coal, or its absence

Everyone talks about phasing out coal – but how will people employed in the coal industry make the transition to other jobs? And what would our economy look like without coal? Chris Briggs from the Institute of Sustainable Futures at the University of Technology Sydney, and Professor Frank Jotzo, director, Centre for Climate Economics and Policy, ANU, offer some clarity.

The Vietnam War as we remember it

Journalist and historian Mark Dapin delves into the truth behind six popular myths that have dogged Australia’s memory of the Vietnam War.

The history of kinder transport, with guest Dr Anna Hájková, Associate Professor of History at the University of Warwick. She covers history of the Holocaust, Jewish history, feminist, gender and queer history.

The Government’s assault on democracy

The Abbott-Turnbull-Morrison Government may be disunited on many policy fronts, but it is of one mind when it comes to keeping its maladministration and assaults on democracy from public scrutiny.

ABC Chair Ita Buttrose has issued a formal statement, in which she asserts what should be in a democracy’s constitution and basic norms of governance: “legitimate journalistic endeavours that expose flawed decision-making or matters that policy makers and public servants would simply prefer were secret, should not automatically and conveniently be classed as issues of national security.”

The raids have made world news: Australia may well be the world’s most secretive democracy is the headline of Damien Cave’s article in the New York Times. His article covers not only the Stasi-style raids on the ABC and on Sunday Telegraph’s  Annika Smethurst, but also the government’s cover-up of its illegal spying on Timor (the “Witness K” case), defamation laws, and state government measures to suppress news of court proceedings.

While Dutton and Morrison try to wash their hands of responsibility, Shadow Attorney-General Mark Dreyfus, speaking on the ABC Breakfast show, states the basic principle  that the government is responsible for actions under laws it enacts: the police should not be scapegoats for the government’s failings.

Their case is supported by the Alliance for Journalists’ Freedom, whose website includes a statement by Peter Greste: “Politicians act on behalf of those who employ them; that is, us Australian voters and tax-payers. As their employers, we have both a right and a responsibility to know what is being done in our names”. The AJF site also includes a short statement on the raid on Annika Smethurst.

If your source of European news has been confined to the reports from the ABC’s London journalists, you may have missed news of the Danish election, where Prime Minister Lars Løkke Rasmussen’s centre-right coalition has lost power to Mette Frederiksen’s Social Democrats. It was a decisive victory that saw a large fall in support for parties on the far right. The Social Democrats campaigned on the need for greater action to address climate change and against Rasmussen’s cuts to government services. In contrast to other Danish parties on the left, the Social Democrats support strong controls on immigration. 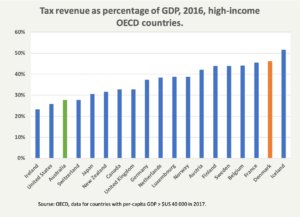 What may surprise some Australians is the failure of Rasmussen’s policies of cutting taxes and spending to have gained electoral support, even though, at 46 per cent of GDP, Denmark’s taxes are the world’s second-highest. Australia’s tax to GDP ratio, at 28 per cent, is almost the lowest for a “developed” country, but you would not believe it if you listen to the government’s propaganda.

Centrist political parties are still reeling over their poor performance in the European elections. Writing in Social Europe, Sheri Berman of New York’s Barnard College discusses how established parties might respond to the success of “niche parties”. She warns about the risk of “accommodative strategies” (as when centre-right parties take on the policies of far-right parties). Such strategies are likely to backfire because they legitimise and strengthen the niche party.

And of the Australian election

This Government is already awful, writes Mark Buckley on his Ask Bucko blog. Morrison’s win “was the time to stamp his authority on government, and signal his intention of lifting standards”.  But he hasn’t – it’s the same old mob (with a few absences).

Schwartz Media’s 7 am podcast on Friday includes a report (in slightly unconventional style) of Karen Middleton’s interview with Anthony Albanese, following his return from his post-election trip thorough Queensland. Middleton is the chief political correspondent for the Saturday Paper and author of Albanese: Telling it Straight.

On the same day that housing speculators were celebrating the Reserve Bank’s decision to cut interest rates, the Productivity Commission produced its annual Productivity Bulletin. The figures do not put six years of Coalition economic management in a good light. Labour productivity (economic output per hour worked) has been on a downslide for at least five years. As economist Paul Krugman said, “productivity … isn’t everything, but in the long run it’s nearly everything”.

Then there were the ABS National Accounts, showing that our economic growth has fallen to levels last experienced during the Global Financial Crisis. 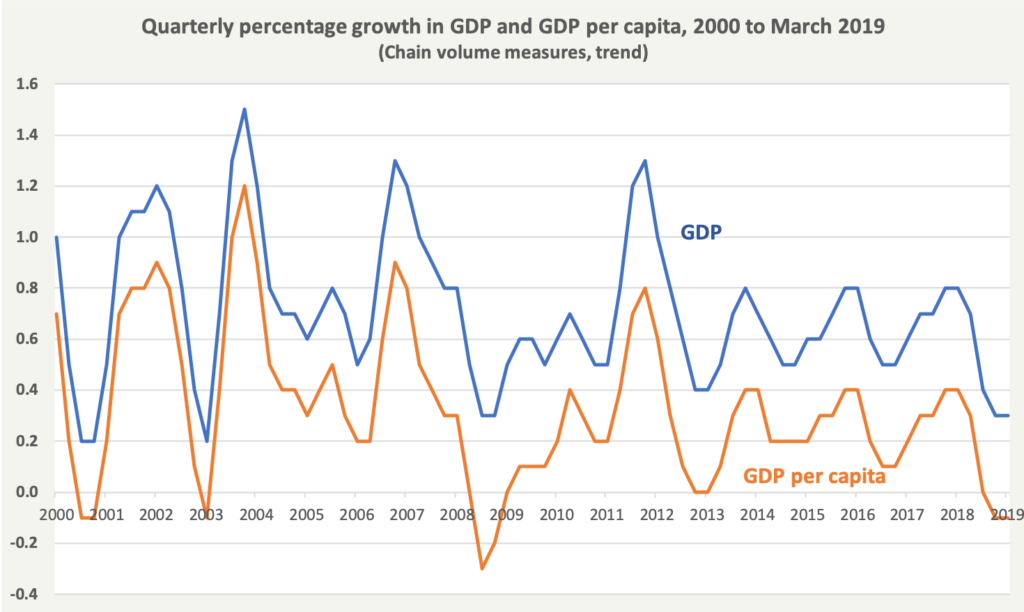 Technically it can be claimed that Australia has gone almost 30 years without a recession. That’s because a “recession” is generally defined as two consecutive quarters of negative GDP growth. But we have been saved from a “recession” by population growth. In terms of per-capita GDP, and in terms of people’s lived experiences, we are in recession, just as we were in 2008.

Even on a per-capita basis, GDP is not necessarily a sound indicator of well-being, particularly if the income from GDP is not well-distributed among Australians or if some of it accrues overseas. Writing in the Canberra Times, in a criticism of the government’s “jobs and growth” mantra, John Hewson reminds us that GDP  “ignores the social and environmental consequences of the pursuit of economic growth, as well as not necessarily being a measure of our nation’s happiness and well-being”.

The government has run the economy into the ground is the headline of Greg Jericho’s article in The Guardian. In a series of informative graphs he takes readers through the components of Australia’s economic collapse, including the fall in household disposable income (probably the most meaningful indicator in terms of people’s well-being) and the profit-wages share of GDP.

Anyone hoping for a coal-led economic recovery would do well to look at another piece of economic news this week, the speech Australia’s Resource Industry – A Look into the Crystal Ball, by Alexandra Heath, head of economic analysis at the Reserve Bank. Even if the world hasn’t yet met peak demand for thermal coal, it will do so within the next year or so. In all of our big thermal coal customers – Japan, China and South Korea – there are plans to shift to cleaner energy resources. (Demand for metallurgical coal is inked to steel production, and is more assured – for now.)

In light of these forecasts the enthusiasm of the Commonwealth and Queensland Governments for the Adani development makes no sense, but writing in The Conversation John Quiggin puts forward some possible explanations, one of which involves a rather large slice of our taxes being spent to keep the project alive until the next election.

A factory of fear – the dark art of political deception

Hannah Arendt for our times

Writing in Commonweal, John Thompson re-visits the work of Hannah Arendt, with reviews of all her most important works and pointers to their relevance to the politics of our present days. “Her work has experienced a sudden rise in popularity and prominence – thanks mostly to the parallel rise of the most demagogic American president in at least a hundred years.” Arendt was most critical of those who withdraw from participation in political life, a point relevant to our times: Essential research reveals that a large proportion of Australians were disengaged with the issues in last month’s election. She also pointed out that democratic resurgence can result from what may seem at the time to be quite small or tokenistic citizen actions.

The New Yorker  corrects a historical misunderstanding  about the 1944 Normandy landings.

Saturday’s Good Reading and Listening is compiled by Ian McAuley