ABC’s Saturday Extra (from 0730 to 0900 or on their website  in case you miss it). Hamish Macdonald will again be in the chair this week.

What do the US and Iran want out of their fight with each other? Foreign affairs analyst, author and journalist Robin Wright on tensions in the Middle East.

As rural blue-collar workers face an uncertain future, their fears and vulnerabilities are reflected in country music – but it’s not always a pretty picture.

UNSW student Jelena Zaric is 21, works two part time jobs and has HECS debts of $15 000 – but in 24 hours she managed to borrow over $13 000. Her story highlights the pitfalls of easy access to finance. So why is this such an unregulated field?

How did the UK become the first G7 country to set a target for net zero emissions – under a conservative government?

The world heard Hong Kong’s protestors loud and clear – but what does China hear and how does it plan to respond?

The election – it really is about education

Writing in The Conversation, Adrian Beaumont of the University of Melbourne summarises what can be analysed about the federal election. His conclusion is that “the most important reason for the Coalition’s upset victory was that Morrison was both liked and trusted by lower-educated voters”. His article also brings to light analysis by Peter Brunt, revealing a significant difference in the two-party vote between those who cast pre-poll votes and those who voted on the day. The margin by which pre-poll voters favoured the Coalition was possibly as high as five percent, possibly explaining why exit polls strongly favoured Labor.

Most analysis in these early days is based on correlations. In time the ANU Election Study will use surveys to find explanatory factors.

One message, missed by most journalists and political strategists, is clear in this graph. 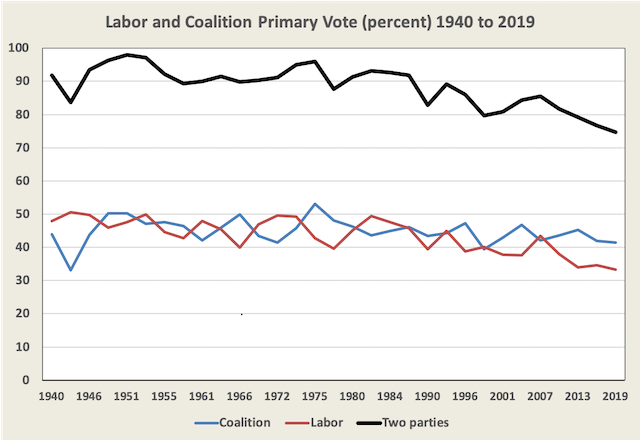 “Why do you need to censor the truth when you can so bury it in an avalanche of the trivial, the inconsequential, the irrelevant, the ephemeral, the salacious – why conceal the truth when you can just bury it”. This is Waleed Aly’s summary of Huxley’s concerns, in his  introduction to the ABC’s Minefield  program What if the greatest threat to a free media was from within? Scott Stephens and Megan Le Masurier go on to discuss the possibility that trivialisation of journalism – the demand for quick and easily digested “news” – has led to elections being contested not on policies or even the performance of governments, but on a general “electoral impressionism”.

A generation of neoliberal policies has weakened the Australian economy

That’s the conclusion to be drawn from the CSIRO’s report Australian National Outlook 2019. It’s a damning indictment of a generation of public policy that has favoured speculation over wealth-creating investment, devalued the public sector, and de-legitimised our civil and political institutions. In a refreshing departure from the way Coalition politicians and most journalists think about public policy, it does not see any trade-off between sound “economic”, “social” and “environment” policies.

Ross Gittins believes that economic reform is stalled until politicians get back our trust. The lesson both Labor and the Coalition are drawing from the election is that any party campaigning on the basis of good public policy is doomed to lose. “To be blunt, the best liars win”.

Our income tax system is rotten: Morrison wants to make it rottener

While some in the Labor Party are wavering in their opposition to Morrison’s extended tax cuts for those with high incomes, Canberra Times  journalist Crispin Hull is in no doubt about where a responsible opposition should stand: “We should forget a minor tax break for lower incomes if it means that the higher income earners do get a revenue-depleting tax break such that the government’s long-term capacity to educate and provide health to everyone is eroded”. In an election won on a slim margin, and influenced by fake news and a $60 million scare campaign, there is no basis for Morrison to claim he has a mandate for any of his reckless economic policies.

That’s the title of an article by Guardian journalist Andy Beckett on the future of political conservatism, which he finds to be in deep crisis “ a crisis of competence, of intellectual energy and coherence, of electoral effectiveness, and – perhaps most serious of all – of social relevance.” In the short term conservatives are winning elections, but to do so they are resorting to clever electoral games, deceit and other desperate measures – often to achieve no more than the slimmest of victories (Trump, Morrison, May). Conservative parties are running out of time, and will have to adjust or accept that they are a spent force.  (Beckett’s optimism seems to be based on an assumption that societies have a bedrock of decency, moral values and liberalism which will ultimately prevail.)

“Even if neither side wants to fight, miscalculation, missed signals, and the logic of escalation could conspire to turn even a minor clash into a regional conflagration.” That is a quote from a Foreign Affairs  article earlier this month What a war with Iran would look like  by Ilan Goldenberg, before the latest incidents of mine attacks, a shot-down drone and America’s called-off offensive. Any escalation of the conflict is likely to have undesirable consequences for both sides, and it would not be confined to Iran.

On the ABC’s Late Night Live, Phillip Adams discusses with Shahram Akbarzadeh of Deakin Universitythe implications of the attacks on the oil tankers. Clouding the issue is  America’s poor credibility on issues of conflict, a credibility trashed by past lies such as the Gulf of Tonkin incident and claims about Iraq’s weapons of mass destruction.

Former US diplomat Chas Freeman writes about The Sino-American Split and its consequences. Because of a gross misunderstanding of history and of China’s place in the world, “in a unique combination of paranoia and complacency, the United States seems determined to retain its supremacy – not by correcting its own deficiencies – but by tripping up and immobilizing China”. The Trump-Pence xenophobia seems to be driven by an “enemy deprivation syndrome” rather than by any rational calculation of US self-interest.

The economic aspect of America’s ham-fisted relationship with China is the subject of Monday night’s Four Corners  Trump’s trade wars, a slightly condensed version of the PBS Frontline  program  of the same name.  As PBS’s Laura Sullivan says “we’re not in a trade war, we’re in an economic war”.

Fewer nukes, but more powerful ones

The Stockholm International Peace Research Institute (SIPRI) has released its latest report on the state of armaments, disarmament and international security. The good news is that the USA and Russia have reduced the number of nuclear warheads. The bad news is that those two countries are building more powerful warheads, and that the number of warheads in other countries is increasing. They also warn that the Treaty on Measures for the Further Reduction and Limitation of Strategic Offensive Arms (New START) is due to expire in 2021, and that the USA and Russia have no plans to extend it.

Deutsche Welle also has a short article by Chase Winter on the SIPRI report – essentially a summary. It includes a three-minute video about a de-commissioned nuclear missile base in southern Germany. It’s a vivid reminder of the Cold War tensions, the risk of accidents (there was one at the base), and the need for extension of the START treaty.

The UNHCR has released its Global Trends  report on forced displacement.  Every day 37 000 people are forced to flee their homes. Of the 71 million displaced persons 26 million are refugees, 41 million are displaced within their own countries, and 3 million are asylum-seekers. The burden of hosting refugees falls overwhelmingly on poor countries – Turkey, Pakistan, Uganda and Sudan are the top four.

An event that received little attention at the time was the National Schools Constitutional Convention in March this year. Writing in Open Forum, John Warhurst reports on the preamble they developed. It’s a 130-word statement of values of “equality, democracy and freedom”, with recognition that the Australian identity has been shaped by the traditional owners of the land, “[whose] sovereignty was never ceded”. The Australia of their vision is a society that “catered to all, regardless of heritage or identity”.

The ABC has a YouTube video of William Barton and the Sydney Symphony Orchestra playing Down Under  at Bob Hawke’s memorial service. (Warning – cellphone speakers won’t do justice to Barton’s didgeridoo.)

Saturday’s Good Reading and Listening is compiled by Ian McAuley

Watch out tomorrow, Sunday, for Peter Sainsbury’s Sunday environment round up .

And remember the second episode of the ABC’s series Who runs this place at 0800. This week the Pharmacy Guild will be one of the lobby groups under examination.