Big ideas for a big country: former literary agent Mary Cunnane on an initiative to take the world of ideas on a roadshow to non-metropolitan Australia.

Xi and his enemies: China’s transformation into a superpower has made many countries uneasy – but within China itself there is a growing backlash to the direction the country, the Party and Xi Jinping are taking.

It’s an almost forgotten chapter in history: in post-war Germany tens of thousands of ordinary Germans committed suicide, driven by a combination of fear, shame and guilt. Historian Florian Huber uncovers their stories in a recently published book.

William Bowe, on his Poll Bludger site, has some fine-grained analysis of swings to and away from Labor in the Sydney region in the May election. (This is the first of his regional presentations.)  While there were some isolated exceptions, the prosperous areas around the harbour swung strongly to Labor, and the further-out suburbs swung to the Coalition.  He also produces a table of electorates comparing Labor’s actual outcomes with the outcomes predicted by a nation-wide model (a regression mode with 11 independent variables). Essentially it shows seats “where the two parties were punching above and below their weight, and where the results were as we might have expected in view of broader trends”. That means factors in individual seats must have been important.

The slippery slope of officially-sanctioned lying

The re-election of the Dutton-Morrison Government has saved us all from “death taxes”; tradespeople need no longer fear that the climate police will confiscate their Toyota HiLuxes; and our borders will be secure against asylum-seeking murderers and rapists.

Writing  in Inside Story, Mike Steketee points out that while in most markets we are reasonably well-served from false claims by consumer protection laws, in our important choice of our elected representatives we enjoy no such protection, in spite of strong public support for truth-in-political-advertising legislation, and in spite of the precedent set in South Australia which has laws concerning political advertising.

The slippery slope of secrecy

“Call me old-fashioned” Senator Kristina Keneally says, when she points out that “elected representatives in executive office are responsible for the decisions governments make and accountable to the people they represent”. Writing in the Fairfax media she is referring to Dutton’s failure to meet legislated reporting deadlines on national security, his suppression of a taxpayer-funded review of the Department of Home Affairs, and the veil of secrecy around the $423 million uncontested Paladin contract for services on Manus Island.

The capability review of the Australian Prudential Regulation Authority hardly makes for gripping reading, but its summary is worth a glance, because it exposes the culture of a regulatory authority that has become too close to those whom it is charged with regulating in the finance sector. “APRA’s tolerance for operating beyond quantifiable financial risks has been low. APRA appears to have developed a culture that is unwilling to challenge itself, slow to respond and tentative in addressing issues that do not entail traditional financial risks”.  That is bureaucratic language for saying that APRA staff are a bit too matey with the people they are supposed to regulate and that they don’t seem to understand much about corporate culture. The review panel is particularly critical of APRA’s “strong preference to do things behind the scenes with regulated entities.”

Writing in Crikey  (paywalled) Bernard Keane draws attention to the review’s major omission: “For all that the government may want us to focus on the failings of APRA today, there’s an elephant in the room: the Liberal Party’s long-term determination to act as agents of the major financial institutions”. Even the National Party has a better track record.

There are 30 000 asylum-seekers who arrived by boat before 2014, who have been permitted to remain in Australia but whose claims for determination of their refugee status have still not been resolved. In its report Lives on hold: Refugees and asylum seekers in the ‘Legacy Caseload’ the Australian Human Rights Commission calls on the government to relax restrictions that prevent these people from gaining permanent residency and that condemn many to indefinite separation from their families. The Department of Home Affairs has effectively rejected the Commission’s recommendations.

(See Bob Douglas’s Pearls and Irritations article for a suite of suggestions for a more morally defensible policy towards refugees.)

How often do economists and others involved in public policy have to point out that private health insurance is an expensive and inequitable way to fund health care, and that, contrary to the industry’s claims, support for PHI probably exacerbates waiting times in public hospitals? The Grattan Institute’s report on the history and purposes of private health insurance is the latest confirmation of the need for a fundamental re-think of the value of PHI. It confirms research that finds private hospitals are no more efficient than public hospitals (probably less efficient), and debunks the Coalition mantra about PHI taking pressure off public hospitals:

In a tight labour market, if doctors are attracted away from the public system, public hospitals may have reduced capacity to meet patient needs. The higher remuneration for medical specialists in the private sector may give an incentive to doctors working in both sectors to maintain waiting lists in the public system, so as to encourage patients to be treated privately.

The report asks the question that governments – Labor and Coalition – both avoid: if the government wishes to support private hospitals, why not pay them directly instead of channelling funds through a high-cost financial intermediary? And why have private health insurers escaped the scrutiny to which other financial firms have been subject?

The ABS has released three significant reports in the past week:

Labour force, June 2019. This is basically about an economy that seems to be coming to a standstill. The seasonally-adjusted figures (which show short-term changes) suggest that job creation has stalled. But because of noise in employment figures, not too much should be read into month-to-month movements.

Household income and wealth, 2017-18.  The ABS media release is headed “Inequality stable since 2013-14”, but that’s not what the figures reveal. (Has the ABS, like Treasury, become a channel for the Coalition party line?)

The figures show a continuing small rise in income inequality over the last 13 years as indicated by the Gini coefficient, but the rise is within the band of the margin of error. 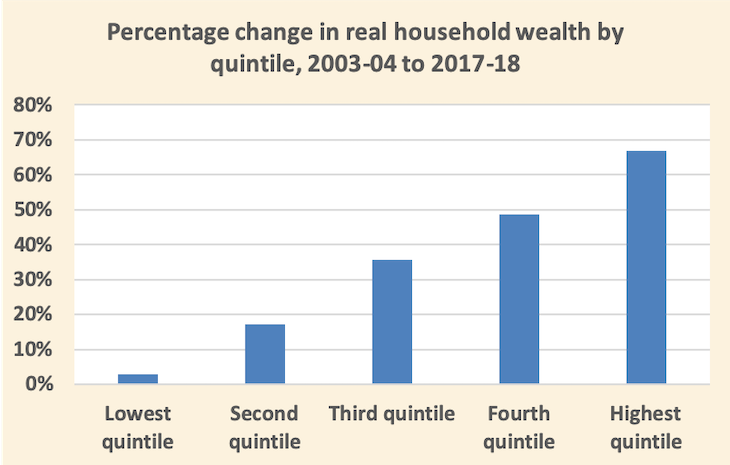 Housing occupancy and costs 2017-18  This reveals a number of trends over the last 20 years. Home ownership is dropping, outright home ownership without a mortgage is dropping even faster, and the proportion of people renting from state housing authorities has halved. Growing numbers of renters are increasingly dependent on private landlords.

Don’t bet the house on the housing market

Nothing would bring more joy to Scott Morrison (and more misery to young people seeking to buy a house) than another housing boom.  The party line, directed to naïve investors, is that with Labor’s horrid plans to deprive Australians of their subsidies their opportunities to realise their aspirations, housing prices will resume their never-ending upward march.  ABC business reporter Michael Janda  takes us through the official thinking, and concludes with some well-considered warnings, not only about the housing market, but also about the economic risks of any moves to increase our already high housing debt levels.

Talk of the death of liberalism is premature

Liberalism with a large “L” may be in a drawn-out death spiral, but Martin Wolf of the Financial Times, in a short video rebuttal of Putin’s assertion that liberalism (with a small “l”) is dead, presents a strong defence of the strength of liberalism.  ”It’s through re-creating itself that liberalism has always succeeded and will succeed again”.

By now it’s reasonably plain that Frydenberg, deaf to sound economic advice, intends to prioritise a balanced budget (whatever economic significance that carries) over a fiscal stimulus. Such a budget strategy goes by the Orwellian term “expansionary austerity”. Writing for the Institute for New Economic Thinking, Christian Breuer of the Chemnitz University of Technology in Saxony, shows how the theory is flawed. Those who claim to have empirical proof of the theory’s effectiveness have confused cause and effect: a budget surplus is a result of strong economic growth, not a cause of it.

On Schwartz Media’s 7amMike Seccombe of the Saturday Paper  explains the origin of Morrison’s economic idea  that tax cuts would stimulate the economy. (A scribble on a table napkin was involved.)  “Conservatives were engaged in one of mankind’s oldest exercises in moral philosophy: that is the search for a superior moral justification for selfishness.” As Seccombe explains, Morrison’s “supply side” economics fails to stimulate growth, actually increases government debt, and worsens wealth distribution.  (Perhaps Morrison expects divine intervention – another miracle – will allow him to succeed where Reagan and Thatcher failed.)

That’s the title of an article in the Canberra Times, written by John Tait, a layman with a Master of Theology who has cross-checked Folau’s comments against biblical sources. He is charitable to Folau – “I think I understand where Folau is coming from” he writes. But he is annoyed when Christians distort a biblical passage in order to preach their message.

We have seen a fair bit of frank correspondence from Britain’s ambassador to Washington, but there are also leaks from the US ambassador to London. (No doubt some of John Menadue’s communications when he was a senior diplomat were similarly frank.)