Brexit: former UK Conservative MP and columnist for The Times  and The Spectator, Matthew Parris, discusses what to expect as we head into Brexit “Super Saturday”.

Ethiopia’s leadership award: we dissect why Prime Minister Abiy Ahmed was awarded the Nobel Peace Prize, and what challenges and criticisms he still faces. The first in a short series on African politics.

Scott Morrison’s recent Lowy address talked about the new global order and he challenges it throws up for Australia. But his government – like every other before – has cut the budget of the country’s diplomatic, aid and trade arm – DFAT – just when it seems we need it most. Guests: Melissa Conley Tyler and Allan Gyngel.

Are crystals the new blood diamonds? Journalist Tess McClure delves into the murky, multi-billion-dollar industry behind the latest wellness craze.

Kevin Brophy on how friendships ebb and flow.

Results from Poland’s election show increased support for the country’s governing far-right nationalist Law and Justice Party (PiS). Poland has a multitude of parties, which tend to come together in blocs at election time. The Law and Justice Party, itself a gathering of conservative parties, won 44 per cent of the vote (up from 38 per cent in 2015). The liberal pro-European Civic Coalition also enjoyed increased support, its vote rising from 24 to 27 per cent. It is still well short of the support that had delivered it government from 2007 to 2015. A grouping of left-wing parties also increased their vote from 8 to 13 per cent, and a small party even further on the right than the Law and Justice Party gained 7 per cent of the vote.

Commentary and context can be found in Politico and Euronews.  Benefiting from strong economic growth and low unemployment the government has been able to buy support with generous social security handouts. Its platform has been one of social conservatism, nationalism and restriction on immigration. Although its policies do not necessarily align with the current teachings of the Vatican, it has had strong support from local movements in the Catholic Church.

An insight into Poland’s public life as shaped by the ruling party can be gleaned from the way the government-controlled broadcaster handled the announcement of Olga Tokarczuk’s Nobel Prize for literature. Writing in Quilette, Bartosz Wieliński reports that the presenter dared not mention her name, simply saying that “a Pole” had won the prize. Tokarczuk is not among the cadre of artists favoured by the ruling party – artists who “present a glorious past and focus on the glorious deeds of the Polish people”.

The Pew Research Center has published polling showing that the level of division and animosity  between Republicans and Democrats is widening, as measured by the percentage of those who give a “cold” rating to those in the opposing party. Its surveys find that over the 18 months to September 2019 the percentage of Democrats giving a “cold” rating to Republicans has risen from 61 per cent to 79 per cent. Republicans are even more hostile to the Democrats: their “cold” assessment of Democrats has risen from 69 per cent to 83 per cent. Each side believes the other to be “closed minded” by a significant majority – particularly Democrats in their opinion of Republicans, while a majority of Republicans consider democrats to be “immoral” and “unpatriotic”.

Essential has polled Australians on their beliefs about what constitutes family violence. Their basic question is “Which if any of the following behaviours do you think would be considered as a type of family violence?”, followed by specific behaviours, ranging from hitting and punching through to forms of controlling behaviour.

The survey also reported on the same questions by federal voting intention. There isn’t much difference, but across all categories Coalition supporters are less likely to classify an action as violent than Labor supporters. Contrary to the Coalition’s propaganda, its supporters seem to be more accepting of controlling-behaviour – more paternalistic – than Labor’s supporters.

Labor’s annual Light on the Hill address generally starts with a celebration of Labor’s contribution to shaping Australia as a civilised and prosperous nation, linking current Labor policy with that tradition.

Jim Chalmers’ address this year  dwells on that theme. He goes on to talk about the challenges of digital technology (safe ground). Most importantly he summarises the narrowing economic path the Morrison Government wants to take our country:

This year the CSIRO warned us that Australia faces a “Slow Decline” if it fails to address the rise of Asia; technological change; climate change and environmental degradation; demographic pressures; and diminished trust and social cohesion.

In that scenario, Australia drifts into the future with weak economic growth, poor educational outcomes and is increasingly vulnerable to external shocks.

Gareth Evans has spoken at the Leon Mann Leadership Forum on political leadership. He lists ten essential qualities. Some are about administrative skills. Some are about ability – “intellectual ability” and “sound judgement”. One that stands out in the present political environment is “unimpeachable personal integrity”.

Unfortunately the full text of his address is not available, but there is an edited version  on The Conversation website.

Why Trump must go: losing count of the reasons

Writing in The Guardian, Robert Reich finds it difficult to list Trump’s impeachable offences while keeping to a reasonable word limit – his betrayal of the Kurds, his business links with Erdoğan’s Government, his requests to foreign powers (Ukraine, China, Australia) to find dirt on Biden, his earlier request for Russia to find dirt on Clinton ….

Reich reminds us that America’s founding fathers sought to prevent this sort of behaviour:

When they gathered in Philadelphia 232 years ago to write a constitution, a major goal was to protect the new nation from what Alexander Hamilton called the “desire in foreign powers to gain an improper ascendant in our councils”.

… an extreme narcissist, pathologically dishonest, shameless, a man who delights in flouting norms. He has a mobster’s mentality. Mr. Trump’s behavior isn’t governed by moral standards; he doesn’t seem to believe objective moral standards even exist.

Wehner’s main concern, in his article What’s the matter with Republicans?, is that the more Trump’s bad behaviour is exposed the more do his backers strengthen their support and defence of him. This is quite unlike the situation in 1974 when Nixon’s Republican colleagues quietly convinced him that his time was up.

At least that’s the way Morrison and Frydenberg would like us to think about the Commonwealth’s fiscal balance. The story is that they are so virtuous and responsible in their efforts to bring the budget back to balance after many years of Labor profligacy.

If you want to understand how much economic nonsense lies in such a way of thinking, you can enrol in a university course in public finance. Or, more efficiently, you can read Ross Gittins’ Why surpluses aren’t necessarily good, or deficits bad.

Don’t believe the Government on infrastructure

Like the Soviet Communists who made grand promises in their ten-year plans and delivered nothing, Finance Minister Cormann talks about the Government’s $100 billion ten-year infrastructure pipeline. But, as Alan Austin points out on the Independent Australia website –  Coalition hypocrisy on infrastructure as actual spending falls – there’s nothing material in that promise.

A quick check of Austin’s data sources confirms that public sector infrastructure spending has declined in each of the last four quarters – ever since Morrison took office and started prattling about “congestion-busting infrastructure”. See the graph below. 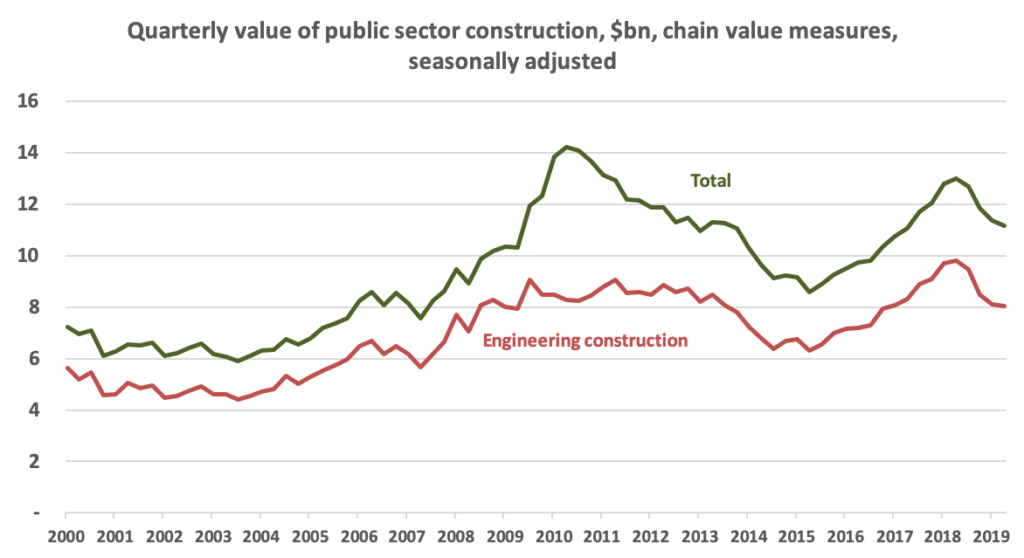 On Newstart and employment

The USA has miserable social security, but because its arrangements for income support for unemployed job seekers vary so much state by state, it provides a wealth of data for researchers. David Ribar of the University of Melbourne has used this natural experiment to study the effects of welfare benefits being made conditional on tough tests to seek work. He presents the results of his study in The Conversation: Lesson for Australia. Make it hard for people to get benefits, and they’ll stop, but they mightn’t get jobs.  Making it tough to stay on benefits, as the Australian Government is doing with drug tests and demands for evidence of job search, is effective in getting people off welfare, but it does nothing to help people find employment. Is “getting people off Newstart” displacing the idea of getting people into employment?

Anglicare has released its Jobs Availability Snapshot 2019, painting a dismal picture for work-seekers who lack qualifications. For those without education and skills there are 5 job-seekers for every job – 14 in the Tasmania and 9 in South Australia. Also, unskilled people are competing not only with one another, but also with skilled workers who resort to unskilled work in a rapidly deteriorating economy.

The Australia Institute has published its submission on Newstart  to the Senate Standing Committee on Community Affairs. Newstart has been frozen in real (CPI-adjusted) terms since 1994, while the minimum wage and incomes generally have risen by almost 50 per cent in real terms since then.  The submission rejects the government’s assertion that Newstart  “is only a temporary payment while people are between jobs“, pointing out that the average duration of Newstart is three years.

Its growth forecasts for Australia are scaled down. The budget the Coalition took to the election projected Australia’s economic growth to be 2.25 per cent this year and 2.75 per cent in the two following years. The IMF’s figures for Australia are 1.7 per cent this year and 2.3 per cent next year. It expects there will be a sharp downturn in metal prices in 2020 (6.2 per cent fall) and a general fall in energy prices. Our current account surplus may be short-lived.

Morrison has it wrong on globalism

Morrison either doesn’t understand or doesn’t want to understand globalism. In his article Globalism is in national interest, despite Morrison, Crispin Hull writes about different interpretations of “globalism”. What to one party or interest group may be “bad globalism” may be “good globalism” to another. In a world where there are global problems such as climate change and where there is international conflict, global responses are necessary:

Sometimes nations have to sacrifice a bit against their immediate interests in order to be part of a rules-based system that works better in the long run than each nation’s government selfishly pursuing its own interests, even if they are democratically elected.

It is not only the far right that argues against globalism. Jon Bloomfield, writing in Social Europe, warns that some on the left  hanker for a “retreat to nationalist boltholes”, but it’s not a realistic political strategy. The time when a community could establish “socialism in one country”, sealed off from the evil capitalist world, are long gone.

China is using the mechanisms of mass surveillance and big data to award each person a “social credit score”, based on whether their activities ae socially approved or not.

Writing in Eureka Street, Kate Galloway compares various Coalition measures – the cashless welfare card, the “Parents Next” program, drug testing for social security recipients – with China’s social credit scheme. The latest Coalition social credit proposal comes from Peter Dutton, who has said that those who protest against the government’s inactivity on climate change should have their welfare payments cut.

(Dutton clearly assumes that only those who lack the skills or motivation to get a job would be so misguided as to disagree with the government. He’s living in a tiny but well-sealed bubble of political extremists.)

Of course Eliud Kipchoge’ 1:59:40 marathon was a tremendous achievement, but in Sydney at least one unsung “quiet Australian” has had a no less noteworthy achievement.