Geraldine talks to senior writer for the Haaretz Chemi Shalev about the indictment of Israeli PM Benjamin Netanyahu and what this means for the government and the coming elections;

The state of the world economy with Harvard professor of economics Kenneth Rogoff, Peter Martin, business and economic editor of The Conversationand Peter Brain from the National Institute of Economics and Industry Research;

The race to make THE battery with Renew Economy’s Giles Parkinson and Sam Jaffe from Cairn energy and research advisors in the US;

Data mining on a global scale with co-founder of Enigma Technologies  Hicham Oudghiri and Swedish Sheep!

A love affair in Hanoi

Yoon Young-kwan, former Minister of Foreign Affairs of the Republic of Korea, writing in Project Syndicate before theDonald Trump-Kim Jong-un meeting, has three criteria for judging the outcome of the venture. They are: “irreversible progress toward a formal peace settlement, denuclearization, and the potential transformation of the North Korean regime.”  He warns that a lack of immediate evidence of progress may be misinterpreted as failure.

A divorce in Munich

It’s worth watching the first 45 seconds of MSNBC’s Youtube presentation of US Vice President Mike Pence’s appearance at the Müncher Sicherheitskonferenz (the subsequent commentary is lightweight). The audience’s five seconds of silence  is symbolic of what may be the widest rift between US and Germany since 1948 when their relationship was established in the Berliner Luftbrücke. (Sorry about the ads.)

Writing in Foreign Affairs Philip Gordon and Jeremy Shapiro title their article How Trump Killed the Atlantic Alliance. Pence’s embarrassment at the applause that never came “suggests that the administration is oblivious to the damage it has done”. They hope for a new transatlantic alliance once Trump is gone, but it won’t be a resurrection of the old one.

A possible reconciliation in London

The ABC’s Georgia Waters outlines what needs to happen for Britain to do a U-turn on its path to economic ruin and  hold a second referendum   on EU membership. She believes the most difficult task would be securing agreement on a question, or a set of multiple-choice questions, to be put to voters. She suggests that demographic change alone (it’s three years since the original vote) would be enough to tip the balance in favour of “remain”.

Singaporean diplomat and professor of public policy Kishore Mahbubani, writing in Harper’s, has advice on How the United States and China can avoid war. America needs to re-visit its ideological assumptions about China. “If America finally changes its strategic thinking about China, it will also discover that it is possible to develop a strategy that will both constrain China and advance US interests”. (Mahbubani is author of the 2018 book Has the West Lost It?, a concise account of the world’s changing economic, military and cultural powers.)

There is no immediate sign of any improvement in the US-China relationship, however. The ABC business editor Ian Verrender explains Trump’s trade showdown with China  and its likely consequences. Trump is under the sway of the “boisterous and bellicose”, including trade representative Robert Lighthizer who is pushing for higher tariffs on Chinese goods.  This is at a time when the world’s major economies, including the US and China, are slowing. (Spoiler: it’s not good news for Australia.)

Government construction is slowing but government advertising is peaking 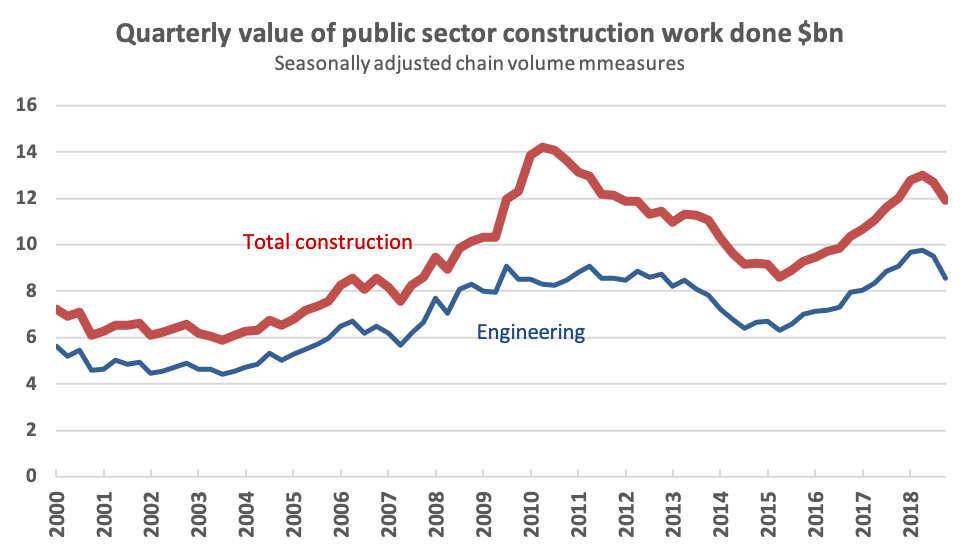 You have probably seen those Liberal Party  Government advertisements about infrastructure projects. The reality, as Alan Kohler points out, is that contrary to expectations in the December quarter public sector construction work actually fell for the second quarter in a row. Engineering work – the work involved in infrastructure, fell by ten percent.  (ABS 8755.0)

The Liberals’ economic failure: they believe in their own competence

“Win or lose the next election, it may be time for the Liberals to rethink their economic narrative” is the title of an article by Carol Johnson  of the University of Adelaide, published in The Conversation. They have always argued (and perhaps even believed) that they are better economic managers than Labor, but evidence doesn’t back up this claim. Neoliberalism, embraced enthusiastically by  the Howard-Costello Government, failed to provide its claimed benefits and has been rejected by the electorate, but the current government is struggling to articulate an economic philosophy to replace it. “The Liberals’ current economic narrative leaves them particularly vulnerable to Labor’s claims they primarily support the big end of town” she writes.

Special offer. The first Liberal (or National Party) Member of Federal Parliament who responds in Pearls and Irritations  comments that he or she could do with  a brush-up on basic economics will be sent a free copy of Governomics: Can we afford small government? under plain wrapper. (The comment will not be published.)

Are we ready for tough economic times?

We may remember Warren Hogan from his time as ANZ Chief Economist, in which role he made frequent TV appearances. He is now with the UTS Business School, and has published in Open Foruma challenging article Australia’s populist moment has arrived. “Populism tends to be cultivated in an environment of poor economic performance and is exacerbated by growing inequality, real or perceived” he warns. It’s always lurking below the surface, and tends to break out in tough and uncertain economic times.  In view of the headwinds facing the economy, whoever wins government in May could have a major task in maintaining the legitimacy of mainstream political parties and established institutions.

But everyone will look after mortgage brokers

Perhaps the only recommendation of Justice Hayne’s Commission that would result in immediate disruption for people who have been having it so good for so long was Recommendation 1.3 on mortgage brokers: “The borrower, not the lender, should pay the mortgage broker a fee for acting in connection with home lending.”  As Jessica Irvine points out in Fairfax media, Labor has now joined with the Coalition in squibbing on this recommendation. Haynes had wanted borrowers to pay mortgage brokers up front on a fee-for-service model, but both parties now want banks to pay the fees.

Labor’s model is a little better than the Coalition’s, but it would still reward brokers with higher commissions for more expensive loans. Brokers handling an $800,000 mortgage would get almost $9,000 in commission, for no more effort than shopping around and being able to use a little basic high school mathematics. And there would almost certainly be a cost to public revenue, because while banks are among the nation’s better corporate taxpayers, many small business people evade and avoid tax through liberal interpretations of expenses and through family trusts.

Stephen Duckett, former head of the Commonwealth health department, and now director of health programs at the Grattan Institute, writing in The Conversation  asks Is it time to ditch the private health insurance rebate? It’s a question Labor can’t ignore. He questions the value of the annual $6 billion public subsidy to private insurers (which is actually an underestimate – the figure is at least $11 billion). “Labor approaches private health insurance a bit like one might approach a dead cat on the table – as an issue that has to be dealt with, but that everybody wishes would just go away” he writes.

On the topic of health, Australia scores reasonably well according to Bloomberg’s Healthiest Country Index.  We come in at seventh place. Spain and Italy score first and second place, followed by Japan. Other Anglo countries score poorly: the US comes in at 34th place, behind Cuba and Costa Rica. Bloomberg does not analyse the causal factors, but we may ask if the Mediterranean diet has something to do with the scores of Spain and Italy, and if reliance on an expensive and inequitable system of private health insurance has something to do with America’s dismal ranking.

It’s 5 am and the Federal Police are at your door, but don’t worry

“Suffice in the 40 years we have had the AFP I have not known the AFP to solve a single ‘crime’ – or leak inquiry – if the result has had the potential to embarrass the government of the day.”  That’s how Jack Waterford sums up his analysis of the performance of the Australian Federal Police, with particular reference to their inquiries of leaks of classified government material – including leaked notice of their raid on the AWU and the leaking to The Australian  of security advice on refugee detention (distorted by the paper to try to embarrass the Labor Party). Not that he accuses the AFP of partisan behaviour: they have a similar poor record when Labor is in office.

Are you free and in Canberra on Wednesday 6 March?

John Quiggin will be giving the Keith Hancock Lecture at the ANU. His theme will be “The Future of Work”. To quote his summary:

Lifting the suppression order on Pell’s conviction has released terabytes of commentary, much of which is simply opinion and little of which covers anything that hasn’t been written before. The exceptions are those comments that consider the implications for the Catholic Church locally and globally. Francis Sullivan, who headed the Catholic Church’s Truth Justice and Healing Council, has a piece in the Fairfax press about the need for reform which “cannot be left in the hands of bishops and religious leaders”. The Economist’s comment is in the context of the just-concluded Vatican conference on sex abuse, confirming the widely-held view “that the church cannot be trusted to police itself or clean up its behaviour”.

Fr Frank Brennan’s contribution inEureka Street is a detailed consideration of the evidence that led to Pell’s conviction. He is concerned about the legal process. Should Pell’s appeal fail, he hopes that Pell “is not the unwitting victim of a nation in search of a scapegoat”. Those who have a Crikeysubscription can read Guy Rundle’s comment  on the process. “God knows that there are few people of less widespread sympathy than Cardinal George Pell”, he writes, but he has a warning for those who celebrate his conviction. “There’s a real danger for progressives in conceding the idea that an arm of the state — which the court system is — establishes what did and didn’t actually happen.”

It’s really OK to go to bed after eating cheese

Last week we drew attention to the risk of being choked by tangled bedsheets, based on authoritative data from the website of spurious correlations. First Dog on the Moon has a different view. In his list of nice things  he includes “getting into a bed with clean sheets and/or listening to the rain on the tin roof” and, of course “people who say ‘hello’ to dogs.”