Geraldine talks to Associated Press journalist David Koenig about the latest developments concerning Boeing and their cosy relationships with the FAA and with airlines;

Building resilience in our communities as a measure to ensure against people moving to the extremes, with psychologist and sociologist Hugh MacKay, psychiatrist Ian Hickie and Michele Grossman, research chair in diversity and community resilience from Deakin University ;

Anna Hajkova, associate professor in Modern European History at the University of Warwick, UK, on the memory of Marie Schmolka who was pivotal in saving Jewish children during the Holocaust.

There has been no shortage of worldwide comment on the terrorist attack in Christchurch. Not only the attack itself, but also its aftermath, including the response by Prime Minister Jacinda Ardern, have received extensive coverage, and whether we like it or not, most news sites stress that the (alleged) murderer is an Australian. Here is some of the more thoughtful local coverage:

The ABC has coverage of anti-immigrant (specifically anti-Muslim) dog whistle issues. Did the Coalition, in opposition in 2010, make a considered decision to exploit xenophobia? Or was the dog whistling that did occur the initiative of particular politicians? Why did Coalition spokespeople talk about “rapists and murderers” on Nauru? Why was it necessary for ASIO to warn the Government about its intemperate language about immigrants? Why will Morrison not make a categorical decision about placing One Nation on how-to-vote cards? Henry Belot’s piece on the ABC website covers these questions, and includes links to the discussion between Waleed Aly and Scott Morrison on Channel Ten’s show The Project.

The Guardian’s Melbourne editor, Gay Alcorn, writes about the influence of right-wing radio commentators on promoting xenophobia and hatred, and draws attention to the strange notion of “balance” that assigns moral equivalence to comments such as those made by Fraser Anning and more considered views.  “The ‘both sides’ argument has rung hollow for years, but at this moment it is disgusting. There is no ‘both sides’ to Hanson or Anning’s brand of bigotry” she writes.

Also from The Guardian  journalist Lois Beckett presents a short history of right wing extremist attacks world-wide, starting with the murder of 77 young people at a Labor Party summer camp in Norway.

Kristy Campion of Charles Sturt University, writing in The Conversation, presents a short history of right-wing extremism in Australia: it’s been with us, and influential in our politics, for 100 years.

MP Anne Aly, Member for Cowan and an expert on terrorism, speaks on the ABC Religion and Ethics Report about the general behaviour of those political and religious extremists who commit acts of violence. Common characteristics include a notion of victimhood, ideas of conspiracy, dehumanisation of and disgust toward the “other”, and the idea of an obligation to take up the fight.

Jason Wilson, an Australian journalist for The Guardian, now living in Portland Oregon, writes that  Islamophobia is practically enshrined as public policy in Australia. There has been a “decades-long drumbeat of xenophobia and Muslim-hate, which has issued from some of the most powerful institutions in the country”.

Writing on the ABC website, Jock Collins of Sydney’s University of Technology presents  Six facts that tell a different immigration story than we hear from politicians, one of which is that last year 27 931 asylum seekers arrived by plane, while zero came by boat. (Reflecting the influence of postmodernist thinking in the ABC, it classifies Collins’ piece as “opinion”, even though it is a straight presentation of collated data. The ABC, it seems, is also infected with the “both sides” disease.)

Trump is cornered, with violence on his mind. We must be on red alert

That is the title of  an article in The Guardian  by Robert Reich who warns that as investigators close in on Trump he could invoke the support of the military, the police and vigilantes. Reich, Professor of Public Policy at the University of California, Berkeley, is no conspiracy theorist. He has been a professor at Harvard’s Kennedy School and was Secretary for Labor in the Clinton Administration. Unlike many other academics he has gone out of his way to understand the America of the “blue states”, where Trump’s support base is strongest.

Rebecca Huntley, author of the latest Quarterly Essay Australia Fair: Listening to the Nation, has published an extract  from her essay in The Guardian. She refers to issues which receive at least 60 per cent support from the voting public. If politicians were guided by what people seek “we would have made big investments in affordable and social housing, banned foreign donations to political parties and further curtailed corporate donations to political parties, invested much more in renewable energy, maintained and even increased funding to the ABC, and made child care cheaper.”

But as ABC’s business editor  Ian Verrender points out, the Coalition paternalistically believes it knows better than the voting public, and is determined to cut income taxes rather than to provide public services, even though such an economic priority is “tempting fate”. The Coalition may have us believe that our run of fiscal deficits results from profligate public spending, but in fact it results from poor tax revenue in an under-performing economy.

Another reason for deficits in public revenue is that many businesses are paying no tax. On the ABC’s  Late Night Live, in an interview with Phillip Adams, investigative finance journalist Michael West gives a preview of his research into Australia’s top 40 tax dodgers.  Number two is Energy Australia, the firm that took over our once publicly-owned electricity transmission and distribution assets. Energy Australia is now domiciled in the renowned tax haven the British Virgin Islands. Even though the privatised energy firms are allowed by our energy regulator a generous return on capital – a return that assumes they pay tax – Energy Australia, having had more than $30 billion in sales over the last four years, has paid no tax over that period. There is a similar story for Healthscope, owned in the Cayman Islands, which has a deal to buy 43 Australian hospitals.  His work will be published, in time, in The New Daily: in the meantime West has the 40 firms displayed in a graphic on  his website.

If workers weren’t so greedy we’d have full employment

The Reserve Bank, the Labor party and  most independent economists may see low wage growth as a problem, but Finance Minister Matthias Cormann sees it as a deliberate design feature of the Coalition’s economic architecture. Writing in The Conversation John Quiggin analyses the path of wages policy in Australia, and describes the persistence within Coalition circles of the idea that even modest rises in minimum wages would cause unemployment to rise.  (More than 100 years ago Henry Ford realised that underpaid workers could not afford to buy his T-Model Fords. This was one of the reasons he  increased wages in his factories. It takes the Coalition a long time to learn the basic economics of capitalism.)

On the same theme Richard Denniss of The Australia Institute writes that “like a dog that doesn’t know what to do when it catches the car it’s been chasing, the business community doesn’t seem to know what to do now they’ve pushed wages growth to record lows and the profit share of GDP to all-time highs.”

One enthusiast for reasonable minimum wages was Alan Kreuger of Princeton University, who served on the White House Council of Economic Advisors. Kreuger died last Sunday: in an obituary in The Nation  Matthew Zeitlin writes about his radical empiricism. In contrast to the abstract supply-demand models used by economists advocating lower wages, Kreuger drew on evidence demonstrating that raising minimum wages did not necessarily result in increased unemployment.

Maybe Minister, if that’s OK with you

In a little-publicised venture, the Commonwealth Government has been undertaking a review of the Australian Public Service. Its interim report  Independent Review of the APS: Priorities for Change was released this week, and its authors ask “please, challenge our thinking and take this opportunity to influence the future of the APS – and through it, Australia”. In a cautious way it identifies some of the reasons why the APS may be serving the short-term political interests of executive government better than it is serving Parliament and the public, but its recommendations for change seem to be rather timid.

It’s a short report, and submissions can be made until Thursday May 2.

The consumer organisation Choice  has found that  “Health insurance has overtaken electricity as the main household cost concern in our latest quarterly survey of more than 1000 Australians”. They go on to describe the government changes that take effect from April 1 (particularly the Gold, Silver and Bronze classifications), and they warn people not to make a hasty decision.

Choice  finds that 82 per cent of people they surveyed are concerned about health insurance costs. That high figure implies that many people don’t realise that they don’t need PHI. Even if it were much cheaper, however, it would not offer good value for most Australians. More people are coming to realize this: the latest report from APRA finds that membership continues to fall. Over last year the PHI firms lost 60 000 members, but that’s a net figure: 130 000 people aged under 60 (the age at which, on average, members switch from net contributors to net drawers) dropped PHI, while the firms gained 70 000 older members. The PHI firms are in deep trouble, and there is a risk that whoever is elected in May will go even further than the present $11 billion annual subsidy to bail them out. Labor seems to be just as committed as the Coalition to support this financial behmouth.

From vibrating beds to infinity mirrors

The Guardian  has a collection of photographs and descriptions of Australian country motels, those constructions that were symbols of modernism in the 1950s when they started appearing on our highways.  Drive right up to your room, TV in every room, your own bathroom, breakfast delivered in the morning!  What a break from those stodgy country hotels. 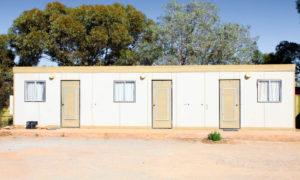 The Guardian does well in portraying the architectural wonders of our motels, but it cannot match this establishment at Olary, South Australia, on the highway between Broken Hill and Yunta. It doesn’t seem to be listed in the Guide Michelin.

John’s website draws heavily on media and independent researchers outside the Australian mainstream. Some media, such as Foreign Affairs  and The Economist, allow limited free access. Some, such as The Guardian  (to which we provide many hyperlinks), rely on voluntary contributions.  We urge all our readers and contributors to support independent media.