Geraldine talks with the Heba Saleh of the Financial Times on whether Algeria is having “the perfect coup”;

What is Apple actually bringing to our screens and shores? With The Australian tech reporter David Swan;

Eileen Chanin on Australia House, London’s first purpose-built Dominion embassy building that defined London as an imperial capital. She is author of Capital Designs: Australia House and Visions of an Imperial London.

Christchurch in its broadest context 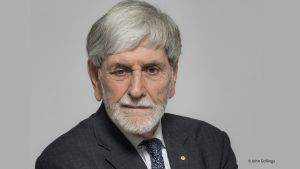 Watch Barry Jones’ Dean’s lecture at the Melbourne Graduate School of Education, modestly titled “Christchurch, Racism and the Existential Crisis for Democracy: How will Australia’s most highly qualified cohort respond?” In 50 minutes Jones takes us through histories of racism, political ideas and democratic engagement. The website provides the option of watching his presentation or reading a transcript. The transcript includes a list of 40 important public policy issues largely neglected in our public discourse and a list of nine books of “recommended reading”, seven of which are 2018 or 2019 publications.

The unbearable burden of a dead albatross – The National Party

“He sold everything he believed in”: The price Turnbull paid to become prime minister. That’s the title of an article by Peter Hartcher, Political Editor of the Sydney Morning Herald. To win the votes for Liberal leadership he had to promise to conservative Queensland MPs that he would not change Abbott’s policies, and the Nationals demanded he put that pledge in writing, in a formal written agreement.

Similarly the newly re-elected Berejiklian Government in NSW has the burden of governing in coalition with the National Party, even though the Nationals lost two seats to the Shooters, Fishers and Farmers Party – a loss attributable in large part to the government’s  having yielded to the Nationals on water policies. The ABC’s Melissa Clarke reports that any relief enjoyed by the Liberals in Sydney “is tempered by a much bigger problem on the other side of the Great Dividing Range”.

Somehow the Federal Liberal Party, and most media commentators, portray the NSW election as a “morale booster” for the Coalition, but the numbers tell a different story. Labor did suffer a swing of 0.7 per cent, but there was a much larger 3.7 per cent swing against the Coalition – 3.0 per cent against the Liberals, 0.7 per cent against the Nationals – as reported on Antony Green’s election website. (As pre-poll and postal votes are added to the tally, the count becomes less favourable for the Coalition, confirming Tim Colebatch’s proposition that Labor squandered its electoral assets with a ham-fisted campaign in the final week.) As Jones said in his Dean’s Lecture, the media’s coverage of politics and policy suffers from a retreat from the use of statistical evidence.

Crispin Hull also looks at the hammering the voters delivered to the major parties – Why major parties will never recover.  “Before long majority government will be rare indeed”.  He goes on to explain that it’s not the parties that have changed; it’s the voters who have changed. Ideologies and party loyalties have given way to specific interests.

One who has looked at the NSW figures carefully is John Hewson writing in the Canberra Times: Bathing in NSW’s reflected glory won’t do, PM, you need a makeover. “The main lesson for the Morrison government is that voters are rejecting show ponies and registering protests against self-absorbed, short-focused politicians who seem to be looking after themselves and special interests, rather than governing, solving problems, and meeting challenges.” Unsurprisingly, the challenge he emphasises is the need to make an accelerated transition to “an inevitable low-carbon economy”.

Why grovel to America’s NRA when we have our own well-funded gun lobby?

With a timing that some on the paranoid right will interpret as a conspiracy, The Australia Institute has published its report Point blank: Political strategies of Australia’s gun lobby. While the profile of our firearms lobby is not as prominent as that of the NRA, its financial resources, on a per-capita basis, are very similar.

There is plenty of media coverage of One Nation’s idiotic behaviour. Most media reports on the NRA meeting describe it as a One Nation issue. Only a few, such as The Guardian’s Paul Karp, point out that Steven Dickson, who accompanied James Ashby on his trip to Washington, until recently was a minister in Queensland’s LNP Government. Dickson’s performance on that footage makes Ashby look like an enlightened liberal by comparison. Dickson made this vile outburst:

We’ve been importing all these Muslims into Australia. We have about 230,000 people coming in a year. Our population’s only 25 million… some really dangerous people. They’re just breaking into people’s homes with baseball bats and killing people. Basically stealing everything they own.

The Liberal Party must be pleased that Dickson is no longer one of theirs – he moved to One Nation in 2017 – but there is no guarantee that the LNP is purged of others with similar sentiments. If Morrison himself had an unblemished record on dog-whistling we may feel some sympathy for him on the preference issue.

New York Times  journalists Reed Abelson and Margot Sanger-Katz analyse the proposal backed by Bernie Sanders and other Democrats to have a single national health insurer. Medicare for All Would Abolish Private Insurance. “There’s No Precedent in American History’’  is their descriptive title. The main objections to the idea, they point out, are that it would hurt the fortunes of investors in health insurance companies, and that there would be a net loss of employment, because fewer people would be required to run a single payer model.

Isn’t that the very point reformers are making? Private health insurance is a bloated financial intermediary, costing a lot to do what a single national insurer does far better. Isn’t good policy about helping the economy re-structure away from high-cost to low-cost and more efficient industries?

Private health insurance isn’t the only way in which younger people are called on to finance older people in retirement. Ross Gittins points out “that our system of taxes and benefits is explicitly designed to move money between the generations”. But he points out that this transfer has gone much too far in favour of older Australians. Although he does not explicitly blame the Coalition, the benefits he mentions – negative gearing, imputation credits and so on – are all Coalition initiatives. His article Generational conflict comes to a polling place near you can be read as a call to younger people to help rectify this injustice when they vote. “Mess with our climate and we’ll mess with your pension” is the message many young people are sending.

That’s not to mention compulsory superannuation. That’s Labor’s sacred policy which sees Australians forced to suppress their living standards during their working lives so that they can draw in their retirement (after the finance sector has taken a cut). Writing in The Conversation  Peter Martin (now a visiting fellow at the ANU’s Crawford School) says Frydenberg should call a no-holds-barred inquiry into superannuation, now, because Labor won’t. The rate of superannuation contribution is scheduled to increase from its present 9.5 per cent to 12.0 per cent in 2025, but Martin reminds us that in a recent inquiry  the Productivity Commission found many ways retirement incomes could be boosted without increasing contributions. Multiple accounts, unnecessary insurance contributions and high fees are all sapping workers’ savings.

Can the State Department be saved?

That’s the subtitle of an article in Foreign Affairs  (one free article a month) by William Burns, who was Deputy Secretary of State from 2011 to 2014. His article The lost art of American diplomacy  surveys the damage inflicted on the Department by the Trump administration and he calls for “reinvesting in the fundamentals of the craft: smart policy judgment, language skills, and a feel for the foreign countries where diplomats serve and the domestic priorities they represent.” Rebuilding that capacity will be the task of the next administration, and will require “a new domestic compact—a broadly shared sense of the United States’ purpose in the world and of the relationship between leadership abroad and middle-class interests at home”.

News not covered in the mainstream media

“Michael Daley resigns, replaced by Asian with PhD” – The Shovel