Geraldine discusses the protests across Sudan that started six weeks ago about increased bread prices but are now calls for the President to step down with Sarah Jackson from Amnesty International.

Human rights groups are calling for independent monitors to be given access to women imprisoned in Saudi Arabia with Elaine Pearson, Director of Human Rights Watch Australia and Saudi Arabian activist Manal Al-Sharif.

Following on from last week’s discussion about Israeli management of water, we turn our attention to Palestinian access to water with Shira Efron, policy researcher at the RAND Corporation.

What might be the unintended consequences of the Hayne Royal Commission with Michael Lawrence, CEO of the Customer Owned Banking Association and James Eyers, banking writer at the Financial Review.

The Australian Industry Group has reviewed the tertiary education sector and has some recommendations, Innes Willox will discuss .

And it’s coming up to ten years since the devastating Black Saturday fires. Historian Peg Fraser who was one of the first curators of the Victorian Bushire Collection for Museum Victoria discusses the varied ways people cope or don’t cope in the aftermath of bushfires. Her book is Black Saturday, not the end of the story.

Hugh Mackay titled his Australia Day Address A Culture of Compassion.  He speaks about what has changed in his 81 years “for the better and the worse”. His top three are the gender revolution, dramatic changes in the distribution of wealth and income, and the fragmentation of society. For Mackay the biggest social challenge we face is “the challenge of preserving our social cohesion”.

George Megalogenis’s Australia Day contribution is an essay in the Fairfax media – Australasia rising: who we are becoming. It’s a rich demographic study of Australia, described in part through the experience of a train ride from Melbourne to Geelong. He reminds us that in 2018 we reached a point where half of our population was either born overseas or had at least one parent who was, but our multicultural experience has significant regional variations, particularly between urban and non-urban regions.

The Centre for Policy Development has released its report on school education Separating Scholars: how Australia abandons its struggling schools, by CPD fellow Chris Bonnor. It’s the third in a series In a Class of Their Own   on disadvantage in Australia’s schools. “Increasingly, we can see high achievers concentrated in the most advantaged schools, while those in lower socio-economic status schools are facing falling achievement levels”. While such segregation is most pronounced in non-government schools, it is also occurring in government schools. Families with means are walking away from low-achieving schools, either through re-location to areas with public schools with strong reputations or paying fees for private schools. And as with multi-culturalism, there is a widening urban/non-urban division.

On Wednesday the OECD released its report on Australia in its series of countries’ environmental performance reviews. Its polite way of awarding us a “fail” on dealing with climate change are the statements: “Australia needs to intensify mitigation efforts to reach its Paris Agreement goal” and “Australia has adopted a piecemeal approach to emission reduction.”  Unsurprisingly for an OECD document, it is critical of the lack of price signals in dealing with emissions: we do not have taxes on our fuels that incorporate climate costs. While the report emphasises our poor performance on climate change, it also has comments on water, waste disposal, native animals and the Barrier Reef, where our grade can be summarised as “trying, but needs more application”. (Although the OECD secretariat is funded through our taxes, they charge for their publications. But on their website you will find a link that allows you to read the report on screen free of charge.)

And on the same day Transparency International released its 2018 Corruption Perceptions Index. At #13 our rank remains unchanged, behind most northern European democracies (we’re even behind the UK), and in our region we’re a long way behind New Zealand (#2), and Singapore (#3).

The war on terror 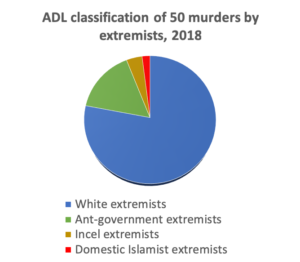 America’s Anti-Defamation League has released its report on murder by extremists in the United States. In 2018 domestic extremists killed at least 50 people, and “every single extremist killing — from Pittsburgh to Parkland — had a link to right-wing extremism”, mainly white supremacists. Out of the 427 deaths from extremists over the ten years from 2009 to 2018, 73 per cent were committed by “right-wing” extremists, 3 percent by “left-wing” extremists, and 23 per cent by “Islamist extremists”.

The war on cash

There was a time, not so long ago, when most Australians were paid in cash, when we wrote checks (quaintly spelt “cheques”) to pay bills, and when if we hadn’t gone to the bank to get cash by 3 pm on Friday, we could face an impoverished weekend. We enjoy the convenience of cashless transactions, but in an article in the Real World Economics ReviewFrankfurt journalist Norbert Haering asks Who is behind the campaign to rid the world of cash? He examines who benefits from cashless transactions (no points for guessing that the financial sector is included, but there are other powerful parties as well) and lists ten virtues of cash.

Just kidding of course, but it would be technically possible for someone to construct a convincing video clip of a politician making an outrageous announcement, just on the eve of an election. CNN, with help from the Pentagon has a chilling website presentation on “deepfake” technology, that makes the creation of convincing fake video and audio reasonably easy. The site has sample videos challenging you to check your own capacity to distinguish between fake and real video clips.

The threat to democracy from deepfake technology is not only from the fakes themselves, but also from the way the presence of fakes raises doubt and scepticism about real recordings.

Morrison announces that if elected Australia will become a command economy

Not really kidding on this one, even if the point is a little stretched. Morrison’s address to the nation on Tuesday (overshadowed and overpowered by dying fish) was about the government’s claim that, if re-elected it would create 1.25 million jobs over the next five years. In an interview with Leigh Sales he justified his confidence by pointing out “we’ve already delivered 1.2 million new jobs as a government since we were first elected”.

In claiming that governments “create” or “deliver” jobs and by implication that they run the economy Morrison is out on a fragile limb with Venezuela’s Maduro. Governments influence the economy, but they don’t run it. As the ABC’s Stephen Long points out
normal economic and population growth would see employment grow by at least a million over the next five years. Tony Abbott made a similar silly claim in 2013, which was rebuffed by at least one contribution to Pearls and Irritations.

Writing in the Canberra TimesJohn Hewson has an article on China, dealing with its politics, its economic structure (a transition to a service-based economy and an ageing population), and its military, financial and trade relations with the rest of the world, covering all this ground in 1000 words. “Although China has embraced many elements of a market economy, it is still very much a communist, centrally planned and controlled, economy and society”, he writes.

From one of Europe’s offshore islands

Britain’s government points to gross economic indicators suggesting the economy is travelling well, but anyone observing the conditions that have led to the self-destructive stupidity of leaving the EU would know that the country has deep structural problems. In response to the 2016 Brexit vote, Britain’s Institute for Public Policy Research brought together a number of experts to chart a re-orientation of the country’s economy, and its report has been recently released. That report  lists six principles that should underpin economic justice

From one of Asia’s offshore islands

Waleed Aly suggests that when Morrison and Frydenberg make claims about the government’s economic confidence, they may actually be expressing a sincere belief in their own competence and not just political spin. But, as in Britain, there is a wide gap between gross economic indicators and people’s lived experiences. “… you probably need a better pledge than ‘if you just keep waiting, the wages will come’; that you should trust the system that hasn’t delivered yet”, he writes in an article Is the Coalition’s economic pitch out of date?  in Fairfax media.

An election candidate from the Liberal Party on public policy

“Without environmental and public assets and public confidence in our politics we’re unable to deal with a warming climate, a growing and ageing population and an unequal economy.”  That’s a quote from former CEO of the Clean Energy Finance Corporation, Liberal Party member, and candidate for the Kooyong, Oliver Yates, writing in The Guardian. Oh – we almost forgot to mention: he’s not the endorsed candidate. He’s standing against endorsed candidate Josh Frydenberg, who, for a short period (the morning of 5 December 2016) seemed to be on top of climate and energy policy, before he was muzzled by climate-change denying thugs in his party.

A who’s who of privilege seekers – Australian Electoral Commission returns

If we wait long enough we can learn who were major donors to political parties. The statutory disclosures for 2017-18 are now on the AEC website, where you can search by donor, party or some other categories. (Try “Adani”). The ABC has a more user-friendly website, where you can search by donor or recipient. (If you wonder why those who are given corporate cars are privileged at the cost of lesser mortals who buy their own cars, try “National Automotive Leasing and Salary Packaging Association”). And to save you from searching for the big donors in the 2018 Tasmanian election, ABC state reporters Alexander Humphries and Ellen Coulter have a website detailing the one-sided donations from the gaming industry and the hotel lobby.

A discussion panel at the Davos World Economic Forum has gone viral after Dutch historian Rutger Bregman (author of Utopia for Realists) took billionaires to task for not paying taxes. He asked why taxes weren’t prominent on the Davos agenda. “It seems like I’m in a firefighter’s conference and no one is allowed to speak about water” he said. “What must industry do to prevent a broad social backlash?  The answer is very simple: stop talking about philanthropy and start talking about taxes … all the rest is bullshit”. The full panel discussion is 37 minutes. The ABC has a short version, covering only Rutger’s initial contribution.

Remember 1996, a forgotten period in Australia’s history, when phones were separate from cameras. The ABC provides us with a nostalgic reminder.