Water management and the success the Israelis have, with Professor Elion Adar and Professor Noam Weisbrod, both from the University of the Negev.

Electrical vehicles – the pros and cons and how we compare internationally, with the CEO of EV Council Behyad Jafari and Martin Brueckner, University of Murdoch, plus a family who drove around Australia in an EV.

Merivale has been paying its casuals on 2007 Enterprise Bargaining Agreements that haven’t included penalty rates. How many similar workplace contracts are out there? With economist Alison Pennington from the Centre for Future Work.

Writer Paul Daley on his little book of big ideas On patriotism.

Celeste Liddle, an Arrernte woman writing in Eureka Street, calls on all of us to march for the future. “So this Invasion Day, instead of calling on Aboriginal and Torres Strait Islander communities to conform to simplistic solutions such as changing the date of a public holiday geared around reinforcing jingoism and nationalism, walk alongside us and commit to doing better.”

Pankaj Mishra on the “unfinished problem of civilisation”

Standing in for Andrew West on the ABC’s Religion and Ethics Report, David Rutledge interviews Pankaj Mishra, author of The Age of Anger, a history of the present. Mishra describes and analyses the tension between cosmopolitan elites and the angry masses – masses gripped by the emotion Rousseau described as ressentiment and driven to define their communities not by shared values but by exclusion. Although the tension has been starkly revealed in recent times in the USA, the UK, France, Turkey, India, Indonesia and other countries, it has a long history of precipitating political upheavals, including the 1979 Iranian revolution. (Rebroadcast from May 2017).

On the same theme of populist discontent, an article in the Italian version of the European monthly The Local describes the support Italy’s government is giving the French gilets jaunes. In an inflammatory statement Interior Minister Matteo Salvini said he hoped the French could soon rid themselves of the “terrible” Emmanuel Macron. It’s a reminder that Britain’s Tories aren’t the only Europeans intent on tearing the EU apart.

Oliver Wendell Holmes said “taxes are what we pay for a civilized society”.  Scott Morrison, never an enthusiast for the civilising benefits of public enterprise, pins his electoral hopes on resistance to Shorten’s promises to close tax loopholes and to collect more revenue from well-off “self-funded” retirees. Writing in The Guardian, Richard Denniss of The Australia Institute reminds us of the cost of our resistance to taxes in terms of the consequences for health care, education and the quality of our infrastructure.

That organ of far-left economic radicalism, The Economist, has an article on the consequences of governments’ irrational fear of debt. In the current low interest rate environment governments could borrow at favourable rates, but the dogma that public investment “crowds out” private investment has constrained government from making productive public investments.

In Australia this dogma is manifest in a private sector busily building casinos, digging coal mines, and constructing corporate office blocks, while the public sector has been holding back on necessary and productive investment in transport infrastructure and environmental remediation.

Climate change is coming to a business near you

Writing in another organ of the far left, The Wall Street Journal, Russel Gold reports on the financial collapse of California’s largest utility, PG&E Corporation. The company “was overwhelmed by rapid climatic changes”, specifically the Californian fires. He writes that companies have been too concerned with the costs from government regulations related to climate change, while ignoring the risk of climate-change related events.

How representative is Federal Parliament?

There’s a lot of pub talk about gender bias in our Federal Parliament, but is it getting closer to a 50:50 male: female ratio? The think tank Per Capitahas done some comparisons between the parliaments of 1988 and 2018 on gender and on many other characteristics. 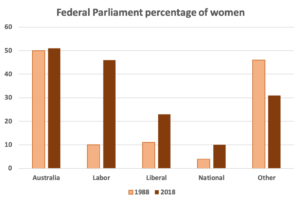 There is progress on gender – shown in the graphic alongside – but in comparison with the rich cultural diversity of our nation, our Parliament is a comparative monoculture. Also, real-world experience is in short supply: 51 per cent of Labor members and 43 per cent of Liberal members list “political advisor” as their career experience. Eryk Bagshaw presents some of the Per Capita data in a neat interactive graphic in an article in the Sydney Morning Herald.

What is it about Labor and the economic cycle?

Australians have a habit of electing Labor governments just as the country faces tough times. Scullin took office two days before the 1929 Wall Street Crash, Curtin two months before the outbreak of the Pacific War, Whitlam just as the postwar Bretton Woods order was falling apart, Hawke as the 1980s global debt crisis sent Australia into recession, and Rudd on the eve of the 2008 Global Financial Crisis. Is this cycle about to repeat itself?

Writing in The Guardian  Greg Jericho refers to the tough economic challenges of our time – dealing with the consequences of climate change and the economic headwinds of US trade wars, Brexit and a slowdown in China. Can Shorten’s Labor Party face these challenges with bold policies or will it be gripped by fear of the Coalition’s scare campaigns?

And our own headwind comes in the form of a fall in property prices – the inevitable deflation of the bubble generated by the Coalition’s reckless policies on capital gains tax, negative gearing and lax regulation of the finance sector. The investment newsletter The Motley Fool  reports that projected property falls are in the order of 15 to 20 per cent, with consequences in the real economy.

Crispin Hull reports on Shorten’s promise to establish a hydrogen innovation hub in Gladstone.  In past times, he points out, it was the Coalition “who stood for progress, development, entrepreneurship and support for industry”. Since 2013, however “the Coalition appears to have become so captive of existing industry, particularly coal and big agriculture, that it has closed its eyes to the new.”

What chance for Warren Mundine in Gilmore?

Morrison’s intervention to endorse Warren Mundine for the NSW south coast seat of Gilmore has generated plenty of opinion, but little thorough analysis. A welcome exception is an article in the Fairfax media  by economics journalist Shane Wright, describing the electorate, the characters involved, and the trends evident from recent elections.