MARK BUCKLEY. Scomo wrote us a letter of apology 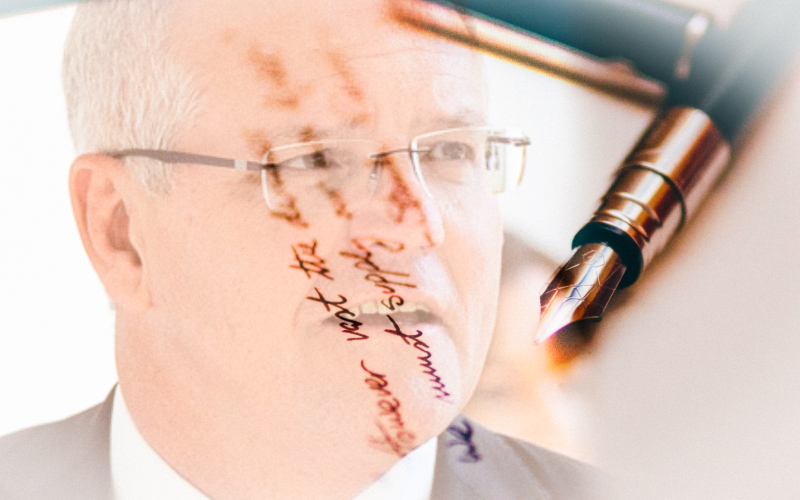 I dreamed that Scott Morrison woke up one day, very recently, and was filled with regret. He was so overcome with regret that he wrote a letter of apology to the people of Australia. The gist of his imaginary letter went something like this:

It is clear that the country needs to be re-set. We have at last done something right, and I feel a sense of pride, and achievement, as I have never felt before. We have flattened the curve of the virus. The people have banded together, and helped us through this turbulent time. They are chafing at the bit now, but we are confident we have done the best we could.

Why did he write the letter?

There are many areas that, on reflection, I should work on, though. Firstly, I need to stop thinking like my great friends, Donald and Boris. They both took a holiday when the virus arrived, and look where that took them. Thousands of unnecessary deaths.

I remember my own holiday. It did not turn out well. It seems that this is a full-time job. And I DO hold a hose, if required.

Education often appears, alongside health, as the biggest issue in people’s minds. I must remember that! My education was provided to me by the state. It was free, and secular. It was excellent, and I cannot imagine why I persist in funding wealthy private schools more generously than the state sector schools. It seems so counter-intuitive, to give taxpayers’ funds to people who choose to sequester their children, away from the common herd. Sydney High had it all, though. Free, but selective. Elitism, without the price. Anyway, I must have a word to Dan (Tehan). Maybe we can try to govern for all in the future.

I actually have a science degree, with honours. So the ‘daggy dad’ persona is a crock, or to put it in more seemly terms, a construct. I do feel great shame about the position my Government takes on climate change, because I know I have further enabled the terrible degradation of this beautiful country, and even its international reputation.

My area of expertise is in economic geography, but a science degree is built on the scientific method, and I know that I can, and I should, trust the scientists, when they tell us we are wrecking the planet. It is just that once I tasted success, and power, I lost my head. I felt that if I did the right thing, it might cost me the big job, but it is not too late. I must sack Angus, and put someone else in the job; someone who actually wants to help us save the earth.

Of course there are the refugees. Wow. What was I thinking? To demonise a thousand people, and to then torture them for years. I can’t even remember what it was I was trying to fix. I do remember saying something about keeping the sugar off the table. That was a reference to gaining entry to Australia through Indonesia. Considering my own family’s arrival here, it was really lacking in insight. But, it’s never too late to change. I sometimes look back on statements like that, and I cringe.

It can’t have been to save lives at sea, by ruining lives on land. That sounds like a false equivalence. What would my tutor in Economic Geography think? Perhaps it was to save money? But then, look at the money I wasted on ‘sports rorts’. We could have slung some of that money at the refugees. We could have put them up at the Hilton for the last seven years, and saved plenty.

Not to mention what Paladin has made from us over the journey. We don’t even check their invoices, so you know they have made a motza. Which brings me to Pete (Dutton). I keep buying him off, by increasing his powers, but nothing works. He craves more, and more. I never sanction him, I allow him to run his own line on Foreign Affairs.

He insults Lebanese-Australians by suggesting that they are more prone to committing crimes. He believes there is a criminal gene, I suppose. Doesn’t he even know that my great great grandfather was on the First Fleet, a convicted criminal. He might as well accuse me of having the same criminal gene. I think it is time I stopped Pete’s reign of terror, and put someone in who likes people. I will probably dismantle his department, while I think of it. It is one of Malcolm’s dopiest errors, and then I made it worse, by keeping Pete on.

I really need to apologise for that statement “A fair go for those who have a go”, which even I know is one of the most divisive phrases ever uttered in Australian history. I know better now that I am in this position. It is not a contest. We’re all in this together. Life is not a game, with winners and losers.

If I am going to stop Pete torturing refugees, I must stop torturing the poor. I want to ‘man up’, swallow the fact that I was wrong all along, and acknowledge that Newstart was degradingly low, and that the majority of Australians support it being substantially raised, permanently. So when the time comes to reduce it, I will remember that I serve the people. And I will leave it where it is.

That would not only make moral sense, but it would serve as a continuing economic stimulus. And while I am here, I would like to unreservedly apologise for ‘robodebt‘, which we know was unlawful and unenforceable for years. Again, what were we thinking? It has been suggested that that scheme may have caused between 800, and 2000 deaths.

I am beginning to see the benefits of confession. It really does lighten the load. With such a brilliant population to work with, we can actually do anything. I think the extra $60 billion that Josh just ‘found’ could come in handy. I know, I will include the visa holders, and the artists, the performers, the casuals and anyone else excluded from JobKeeper. Let’s actually treat them with dignity, rather than sending them to food-banks. Food-banks, in Australia! What were we thinking?

Then I woke up.