Scott Morrison has said that he and Donald Trump “share a lot of the same views“. Just how far does that similarity extend? 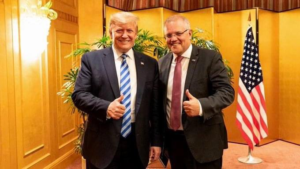 Was there a message when Donald Trump bestowed on Scott Morrison the legion of merit, the US’s highest military honour? Should Morrison have accepted the award?

Former prime minister Malcolm Turnbull said that accepting honours from foreign countries is always “fraught” and “questionable”, and suggested it was a pity Morrison had not found a tactful excuse to refuse it. He added that Morrison needed to change direction if Australia is not to be seen as a “Trump-lite refuge in the southern hemisphere”.

The legion of merit was awarded to Morrison for ‘leadership in addressing global challenges and promoting collective security”.

Does that leadership on global challenges include his “actions” to tackle climate change, the lack of which led to him missing out on a speaking slot at a recent UN climate summit?

As for promoting collective security, numerous commentators have noted that Australia has dug itself into a hole in its relationship with China, which began with its demand for an independent international inquiry into the origins of the pandemic. Such a demand was also seen in some quarters as an attempt by Morrison to further ingratiate himself with Trump. Meanwhile, the relationship with Australia’s most significant trading partner by far has only deteriorated.

Then this week the world was treated to violent scenes in the US Capitol, courtesy of Trump supporters who refused to accept the results of the US presidential election.

Leaders from across the world condemned what was happening. They called on Trump to concede and ensure a peaceful transition of power.

When asked whether Trump bore some responsibility for undermining democracy, Morrison said he would not offer further comment on the “terribly distressing” scenes. He said US democracy was ‘‘great’’; dismissed calls to say something meaningful as ‘‘divisive’’; and refused to criticise Trump for sending mixed messages when the president asked his supporters to disperse.

Malcolm Turnbull described Morrison’s response as “a bit weak” in comparison to the condemnation from other world leaders.

Judged by the company you keep?

After becoming prime minister in August 2018, Morrison was invited to the US and treated to a state dinner in September 2019 at the White House, only the second world leader after French President Emmanuel Macron to be given that honour by Mr Trump.

He also attended a Trump rally in Wapakoneta, Ohio and praised Trump’s political priorities, saying the pair “share a lot of the same views”.

What sort of views would they be?

Two years earlier, on August 12, 2017, a young woman who was protesting against a massive white supremacist rally in Charlottesville, Virginia, was killed when a man drove his car into the crowd of counter protestors. Two days after the death of Heather Heyer, Trump stood in the lobby of Trump Tower in Manhattan and told reporters: “I think there is blame on both sides.”

During one of the 2020 presidential debates with Joe Biden, Trump refused to condemn white supremacists, instead telling the Proud Boys, a far-right group often associated with violent protects, to “stand back and stand by”.

Morrison government’s backbench MP George Christensen has repeatedly claimed that the US election was stolen from President Donald Trump with “dodgy extra votes” and has posted on Facebook about ‘‘Democrat vote fraud’’. Facebook has rebuked him for his misleading claims, but when Morrison was asked to comment, he said:

“You know, Australia is a free country. There’s such a thing as freedom of speech in this country and that will continue.”

Similarly, there’s no rebuke when Liberal backbencher Craig Kelly posts in support of hydroxychloroquine, an anti-malaria drug touted by Trump and others as a coronavirus treatment.

“We have reviewed all the scientific data … and we can now say, definitively, that hydroxychloroquine should not be used as a treatment for anyone with COVID-19.’

While Australia is working to stop disinformation from authoritarian states around the world when it comes to his own back yard, Morrison appears to sit on his hands. What was that about people in glass houses?