Scott Morrison’s budget report card: could do a hell of a lot better 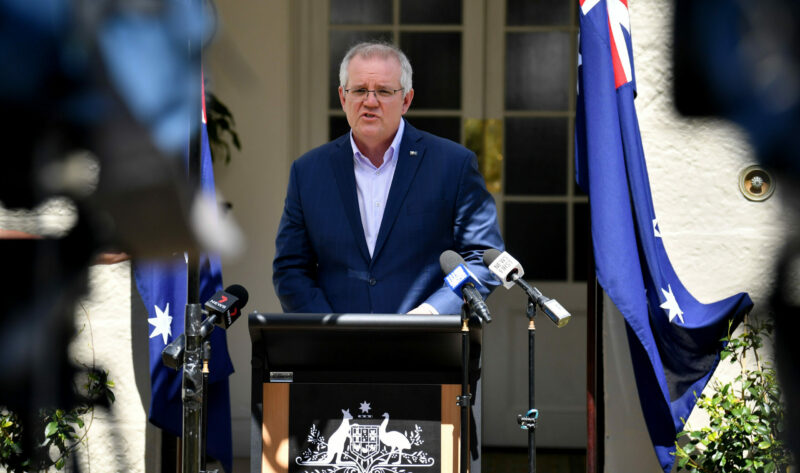 When it comes to the relative strengths and weaknesses of the two main parties, polling shows voters’ views are highly stereotyped. For instance, the Liberals, being the party of business, are always better than Labor at handling money, including the budget. But this hardly seems to fit the performance of Scott Morrison and his Treasurer, Josh Frydenberg.

His overall assessment is that the Morrison government is guilty of underfunding essential government services on the one hand, and, on the other, wasting billions on politically high-profile projects.

Keating traces these failures to two sources. First, the government’s undying commitment to Smaller Government, but unwillingness to bring this about by making big cuts in major spending programs, such as defence, age pensions or Medicare.

This is a tacit admission that “Smaller Government” is an impossible dream. Why? Because it’s simply not acceptable to voters. But this hasn’t stopped Morrison and Frydenberg persisting with the other side of the ‘”Smaller Government” equation: lower taxes.

The consequence is that they underfund major spending programs, while engaging in penny-pinching where they think they can get away with it. Too often, this ends up as false economy, costing more than it saves.

For instance, Keating says, the Coalition has reimposed staff ceilings. By 2018, this had cut the number of permanent public servants by more the 17,000. But departments now make extensive use of contract labour hire and consultants to get around their staff ceilings, even though it costs more.

Apparently, being elected to office means you can ignore unelected officials saying “it’s contrary to the Act, minister”.

Let’s start with Keating’s list of underfunded spending programs. The government has increased aged care funding following the embarrassment of the aged care royal commission, but spent significantly less that all the experts insist is needed to fix the problems.

On childcare, this year’s budget increased funding by $1.7 billion over three years, but this is insufficient to ensure that all those parents —mainly mothers — who’d like to work more have the incentive to do so. This is despite the greater boost to gross domestic product it would cause.

The National Disability Insurance Scheme is clearly underfunded — which is why we have a royal commission that’s likely to recommend additional funds. (I’d add, however, that it’s perfectly possible for underfunding to exist beside wasteful spending on private service-providers costing far more than the state public servants they’ve replaced.)

On universities, the government has recognised the need to provide more student places, but failed to provide sufficient funding. On vocational education and training, the extra funds in this year’s budget were too little, too late. They won’t make up for the 75,000 fall in annual completions of government-funded apprenticeships and traineeships over the four years to 2019.

While housing affordability has worsened dramatically, the government’s done nothing to help. Its modest new assistance to first-home buyers will actually add upward pressure to house prices. What it should be doing is increasing the supply of social housing.

Turning to wasteful highly political, high-profile spending, Keating’s list is headed by the JobKeeper wage subsidy scheme. He acknowledges, as he should, that the scheme was hugely successful in maintaining the link between businesses and their workers, so that the fall in unemployment after last year’s lockdowns ended was truly amazing.

Keating also acknowledges that the scheme was, unavoidably, put together in a hurry. At the start of recessions there’s always a trade-off between getting the money out and spent quickly and making sure it’s well-spent. The longer you spend perfecting the scheme, the less effective your spending is in stopping the economy unravelling. The stitch that wasn’t in time.

Remember, too, that since the objective is to get the money spent and protecting employment, it doesn’t matter much if some people get more than their strict entitlement. In these emergency exercises, it’s too easy to be wise after the event. And the more successful the scheme is in averting disaster, the more smarties there’ll be taking this to mean there was never a problem in the first place, so the money was a complete waste.

But it’s now clear many businesses — small as well as big — ended up getting more assistance than the blow to their profits justified, and many haven’t voluntarily refunded it. Keating criticises the failure to include a clawback mechanism in the scheme and rejects Frydenberg’s claim that including one would have inhibited employers from applying for assistance.

Next, he cites the contract with the French to build 12 conventional submarines. The process that led to the selection of the French sub was “completely flawed”. There was no proper tender, with the contract awarded on the basis only of a concept, not a full design.

Five years later we still didn’t have a full design, but the cost had almost doubled. The government was right to cancel the contract, but the cost to taxpayers will be between $2.5 billion and $4 billion.

Finally, spending on road and rail infrastructure projects, which was booming long before the pandemic. Keating quotes Grattan Institute research as finding that overall investment has been “poorly directed”.

More than half of federal spending has gone on projects with no published evaluation by Infrastructure Australia, suggesting many are unlikely to be economically justified.

“In short,” Keating concludes, “there is an enormous management problem with the government’s infrastructure program. The projects are much bigger, but often poorly chosen, and poorly planned with massive cost overruns.

“The key reason is that the government announces projects chosen for political reasons.”