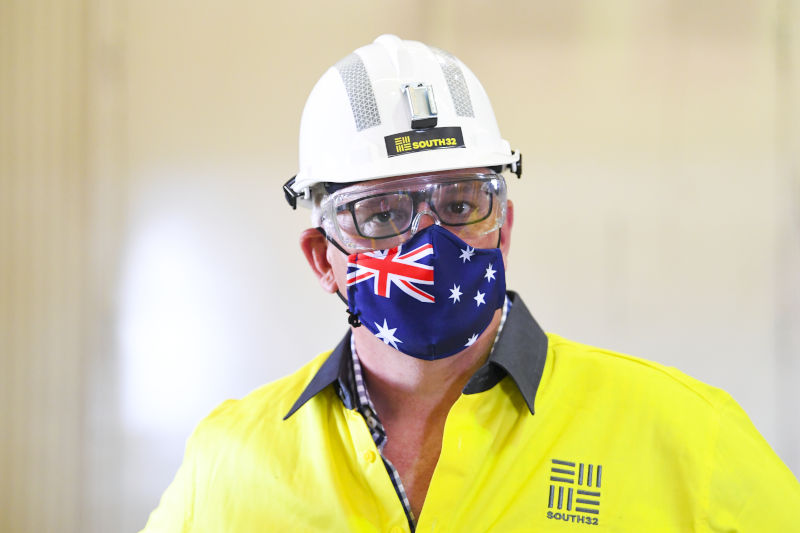 The Coalition enacts a shadow play pretending to be the party of the working man, even while it strips back the services it provides him. Image: AAP

The recent budget has underscored that the Coalition government has abandoned the needy, and the nation’s future. Whether an Australian is hunting for a job or displaced from disaster-wrecked town, they should expect almost nothing from our leaders.

The budget’s lessons should remind us that “conservatives” see themselves as representing the self-sufficient. Anyone unable to fend for him or herself is acceptable wastage. The tin boat heroes of Lismore are perhaps the model. Lismore largely took care of itself as underfunded emergency services struggled to cope. Without those brave rescuers in their tinnies, many more would have died. Future deaths will be met with hollow “thoughts and prayers” and a shrug by “conservative” politicians.

This is the implicit message from the government. The unreckonable harm of their policies – including the funding of new and bigger fossil fuel projects – will be communities’ to bear.

Instead of looking at the systemic crises facing the precariat, the splashy election budget threw it spare change in the hope that voters might be dazzled enough to reelect the incumbents.

Ultimately Australia’s battlers are on their own. Jobseeker payments have gone from 43.9% to 43.1% below the poverty line. A $420 tax break for a single year hides a tax increase for low and middle income earners. A gift of $250 to pensioners will do little to cover even the additional bills as Medicare’s coverage shrinks. Meanwhile the tax strike of the rich continues
unchecked.

As rent challenges those battling to make ends meet, Scott Morrison’s only solution was that renters should buy property, the price of which has been inflated out of reach by government policy that benefits the wealthy investor. The government program he referred to there will be another announceable that ends up helping only a handful. His flippant statement was little more than cover for a party that panders to donors at the expense of the rest of us.

Low unemployment rates mean little when a single hour of paid work places the individual in the employed category, and too many are under-employed. That’s with the backpackers and foreign labour who do so much of our low-paid work yet to return in force.

This makes even more nauseating Scott Morrison’s constant disingenuous roleplay as tradesman and labourer. It reflects, however, the inversion that has taken place in right wing politics. The Coalition no longer portrays itself as the party representing its investors. Instead it enacts a shadow play pretending to be the party of the working man, even while it strips back the services it provides him and his family.

Wendy Lovell, Victorian Liberal former Housing Minister  displayed  the superficiality of this clash of interests when she spoke of there being no use placing low-income families in “the best street in Brighton where the children cannot mix with others or go to the school with other children…” There is no questioning of the policies that create the gulf between rich and poor in the current Coalition.

Meanwhile “highly regressive” tax cuts for mainly rich men  continue unchallenged. Combined with no interest in preventing the siphoning of wealth offshore, this strips the treasury of the funds the nation needs to address our challenges. Largesse for fossil
fuel projects and military spending was promised by Frydenberg without any sense that it needs justifying. The spin that complements this generosity has convinced us, however, that spending on the community must be begrudged and scraped and costed at length.

The endorsement of the self-sufficient and the abandonment of the needy is not limited to Australian right wing politics. The increasingly extreme politics of the Coalition, echoing their role models in the Republican Party, trumpets an allegiance to free market libertarianism. Richard Denniss has pointed out with great clarity that they actually have willingness aplenty to tilt the market in favour of their donors and favoured economic interests. Their libertarian credentials are as shallow as their working man tableaux.

This government is authoritarian in tendency rather than pursuing freedom. Concetta Fierravanti-Wells’s expose of the highhanded treatment of NSW preselection procedures is only a fraction of the problem. The persecution of whistleblowers, secrecy, surveillance and suppression of protest are deeply concerning.

And part of an authoritarian trajectory is the dehumanising of a group of “outsiders.” By uniting the community of the nation against a common enemy, “culture war” battles can be used to distract from the diminution of living standards of the percentage of population needed to hold power.

For much of the last 20 years, it has been the refugee that came by boat who has served as the Coalition’s threatening “outsider” for this gambit. It is reprehensible enough. How much more disturbing might it be if the Coalition is to continue its demonisation of Australia’s “needy” until they are seen as more troublesome than they are worth.

Part of that dismissal conflates them with loathed progressives or greenies. Barnaby Joyce illustrated these ideas when he dismissed two bushfire deaths in his electorate as likely Greens voters. The Liberal Party functionary, Shane Stone, who now acts as the coordinator general of our National Recovery and Resilience Agency dismissed  those who lived in flood-destroyed areas as people who wanted to “live among the gum trees.” Republican rhetoric is much further down the path of depicting progressives not just as a nuisance but as a literal threat to the lives of conservatives. This gambit is named “accusation in a mirror” and is part of the process of creating the fear to foster awful acts of violence.

Stone’s claim that “the taxpayer and ratepayer cannot continue to pick up the bill for these huge catastrophic, damage events” is not true unless we make it true. Richard Denniss’s Big is a challenge to us to confront the accepted mantra on where national income can be gleaned and how it can be spent. The climate crisis will be an area where unthinkable amounts will need to be spent, and those decisions need making now.

In one term of a government, Australia has begun to see the death, destruction and financial cost of the climate emergency in stark relief. Frydenberg’s budget has promised a combined $3 billion to both renewables and disaster preparedness but the spending on climate change measures is intended to decline every year in the coming term. Meanwhile more than ten times that amount has been promised to fossil fuel corporations.

The government not only plans to exacerbate the impact of the climate emergency, but continues to play games with the impact it will have on Australians. Every degree the climate increases in heat, for example, adds an extra 7% of water to the flood that follows.

One can only judge that the Coalition perceives the poor who are more likely to live in climate disaster zones because these are more affordable (and the progressives who often live in threatened areas) as disposable. In an era when we no longer need mass labour in industry and the military, are these plutocrats to some degree shrugging their shoulders about the inevitable losses?

Whenever opposing politicians draw attention to the deep injustices at the core of modern right wing politics, they are shut down with cries  of spruiking, ”The politics of envy. The politics of the class war”. Warren Buffett admitted, “There’s class warfare, all right, but it’s my class, the rich class, that’s making war, and we’re winning.

We must decide now, before the crises become more overwhelming, whether we are going to accept the abandonment of those most wracked by rising costs and catastrophes. Right wing pretence of being the working man’s party will not address the fact that they are happily allied with the aspiring oligarchs, and plan to leave us to our fate.