‘Scott Morrison’s ministerial fetish: ”An unprecedented trashing of our democracy”’ 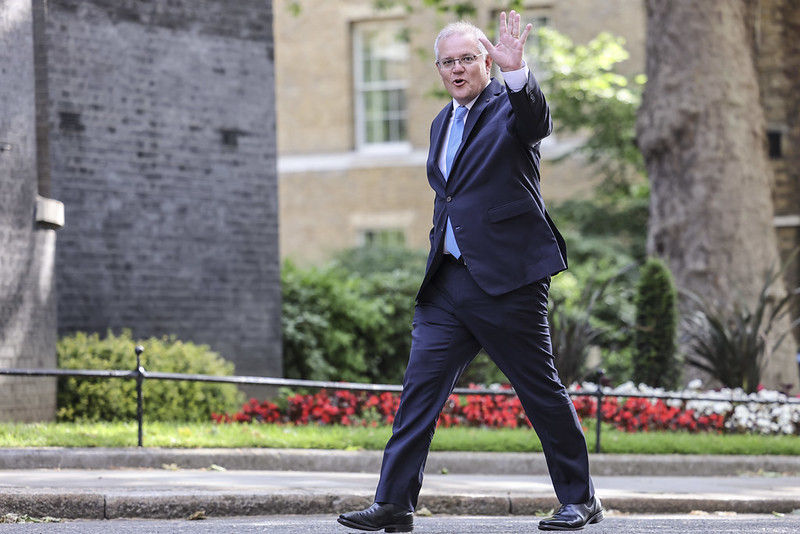 Scott Morrison must resign immediately as the member for Cook, leave the Parliament, and try to salvage what remains of his shredded reputation as Australia’s 30th Prime Minister.

Morrison’s secret appointment to at least five ministries – each of which was already held by an existing Minister – in concert with the Governor-General, is destructive of our system of responsible government, a deception of the Parliament, and an affront to the Australian people. Make no mistake about this bizarre, secret, usurpation of ministerial command of treasury, home affairs, finance, health, and resources; it is serious and disturbing.

The former Prime Minister, Malcolm Turnbull, describes Morrison’s ministerial fetish as; ‘one of the most appalling things I’ve ever heard .. this is sinister stuff’, and with good reason. It is a corruption of political process that goes to the heart of our democratic system of responsible government, in which individual ministers are responsible for specific departments, and accountable to the parliament and the Australian people for their actions. Ministerial responsibility is the critical means through which political accountability and transparency in office are realised, of which people clamoured for more at the recent election. It goes without saying that this fundamental responsibility is simply impossible if we don’t even know who the Minister is.

Let’s be clear on just what the fundamental point at issue is here. It is not, as some have suggested, that the former Prime Minister held several ministerial portfolios at the same time – that is neither uncommon nor a problem: Tony Abbott for example was both Prime Minister and Minister for Women – yes, I know right – the issue here is quite different: it is that Scott Morrison was sworn in by the Governor-General to five ministries each of which was already held by somebody else. And this was done in secret by the Governor-General, David Hurley, on the advice of the Prime Minister, without any notification of this unprecedented ministerial duplication either to the Parliament, or even, with the exception of Health Minister, Greg Hunt, the other Ministers.

This was the creation of a phantom ministry, existing above and beyond the publicly known official ministry, and capable of exercising the full range of ministerial power in relation to those portfolios, in secret. In Prime Minister Anthony Albanese’s excoriating assessment, this was ‘an unprecedented trashing of our democracy’. The failure of Morrison to identify himself as a Minister, during every Question Time for instance, was a gross deception of both the Parliament to which ministers are responsible, and the Australian people.

Various commentators have depicted this as in some way being a shared arrangement, or a ‘back-up’ position – a ‘joint minister’, ‘sharing’ jobs, ‘co-ministers’ for example – this is not correct. A shared ministry would, at the very least, have required the knowledge of the other ‘co-minister’ – how could it be otherwise? -and only Greg Hunt knew of this private arrangement. It is difficult to see how these could be in any way shared Ministries if neither the other Minister, the public, nor the Parliament, were aware the arrangement even existed.

Any shared ministerial arrangement would also need to be specified with the division of responsibility between the two Ministers and set out in the Administrative Order creating the second, Morrison, position. We are yet to see the Administrative Order since the Governor-General, David Hurley, did not release it at the time. Morrison was sworn into all five Ministries as a fully-fledged duplicate Minister, despite the existence of an incumbent, with the full powers of that portfolio available to be used by him, in secret.

Whether this appointment of a duplicate Minister is ‘technically legal’, is frankly not the point. Politically, it is a nonsense, a political oxymoron which undermines political accountability and responsibility by fracturing it. If ‘responsible government’ is to mean anything at all, you cannot have a second ‘Minister’ appointed in secret, who can at any point step in and over-ride the decision of the first, and only publicly acknowledged, Minister.

Morrison was sworn in by the Governor-General, Hurley, apparently through the device of ‘an administrative instrument on the advice of the Prime Minister’, with legal advice apparently provided by the former Attorney-General, Christian Porter. Hurley has defended the failure to publicise Morrison’s appointments as ‘a matter for the government of the day’. While the Governor-General was right to act on the advice of the Prime Minister, provided the Prime Minister retained the confidence of the House of Representatives as Morrison did, the secrecy about these ministerial appointments raises obvious concerns.

Since the Governor-General had already sworn somebody else into each of these portfolios, we can expect that Hurley asked Morrison about the necessity for them, and the legal basis on which this unprecedented decision to appoint a duplicate minister was made. According to the classic duty of the Crown as described by Bagehot, ‘to advise, to counsel and to warn’, Hurley ought to have discussed these duplicate appointments openly and robustly with the Prime Minister, before acting on his advice.

We know from the vice-regal letters of previous governors-general, released by the National Archives earlier this year following my successful ‘Palace letters’ High Court action, that the governor-general would also have been expected to inform the Queen of these ministerial appointments. It is quite possible then, that the Queen knew of Morrison’s duplicate appointments, while the Australian parliament and the people did not.

However, neither Morrison nor Hurley made these ministerial appointments public, and it is here that the role of the Governor-General ought to be considered further, for the secrecy is troubling.

There was no public or parliamentary announcement of any of Morrison’s additional portfolios, nor any Order of the governor-general. It is not good enough to claim as Hurley has, that the decision on the public announcement was a matter for the government, it is not. If the Prime Minister directed the governor-general not to make the usual public announcement of a Ministerial appointment, then Hurley should now make this clear. As it stands, the Governor-General became a party to the deception of the Parliament and the people, and he must now consider his position.

Last year Morrison vetoed a controversial gas exploration plan, PEP-11, ostensibly as Prime Minister, and later emerging in the capacity as unknown Minister for Resources. We only know of this due to legal action taken by Assets Energy earlier this year challenging the ministerial decision, which brought Morrison’s secret role as putative ‘Minister for resources’ – who knew? – to light. That case has also highlighted precisely the dangerous folly of appointing a second, secret, Minister to a position already held by an existing Minister – it raises the prospect of potentially unauthorised decision-making on the part of the phantom Minister, whose role was previously not even known.

One intriguing remaining question is whether the Heads of Department of these five ministries knew of these appointments, as apparently the Head of Prime Minister and Cabinet, Phil Gaetjens, did. Did they know of the second Minister to whom they were also accountable? Was Hurley advised by Morrison not to make these appointments public, and what other actions did Morrison take as Minister across his five newly discovered portfolios?

There is a long way still to play out in this strange and troubling case. Morrison’s own former Ministers are now calling for his resignation, shocked by this betrayal of trust, convention, and responsibility. It augurs an ignominious end to the political career of an ignominious Prime Minister.