Season’s fearings in Indonesia this Christmas 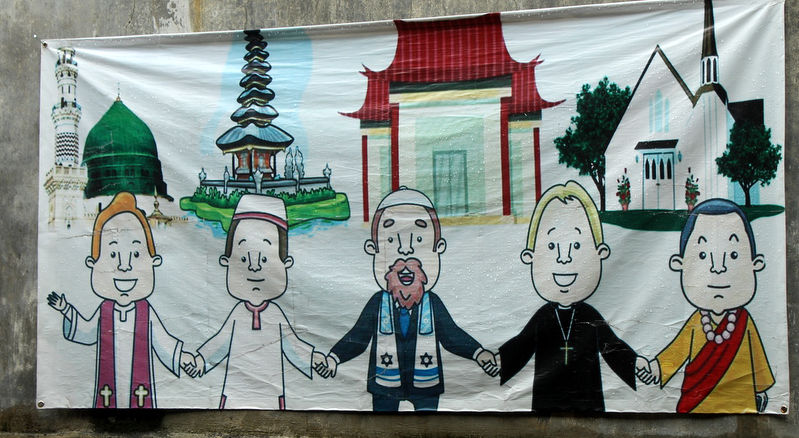 Will it be safe for Christians this Saturday night in Indonesia? The signs of the festive season used to be plastic mistletoe and corflute Santas in shopping malls. Now in East Java’s second biggest city it’s armoured cars outside churches.

The angular steel of the ugly green Bushmaster lookalikes clashes with the soft white curves of Our Mary of Mt Carmel towering behind. The Catholic Cathedral has ample space to park war machines because it’s on the crossroads of Ijen Boulevard, the most spacious and richest end of Malang.

The idea is that displays of weaponry deter terrorists – provided they go for big targets.

Yet plenty of lesser-guarded places of worship remain in the metropolis (pop 850,000) which boasts it’s green, smart and accepting – a quality hard to measure, though with a streetscape to impress.

Within 100 metres of the major Protestant church is the Great Mosque of Malang and on the other side of the town square the Catholic Sacred Heart of Jesus.

All the churches are neo-gothic, built more than a century ago and dominating their locales. During the Second World War, the Japanese occupiers used them to store food and armaments, but they escaped serious damage.

In July 1947, returning Dutch troops drove into the hilltown to quell militant revolutionaries who ran a scorched-earth retreat, fire-bombing colonial-era buildings including the Town Hall. The churches weren’t touched.

Malang fancies itself as different. When the local authority tried to promote tourism this year by advertising halal (allowed for Muslims) food outlets, huge banners appeared – including on the Town Hall wall – with the slogan in English Malang Tolerant City Not Halal City.

No authorisation but the professional and costly signs carried images of the national flag and were probably made by Jaringan Islam Liberal (JIL). The Liberal Islamic Network champions inter-faith events and has a history of pouncing on hints of division.

Seven years ago hundreds of posters appeared overnight on pillars and trees with the message which translated as: ‘Good Muslims do not greet Christians with Happy Christmas or celebrate the New Year.’

Within two hours they’d all gone, ripped down by JIL members alerted on social media.

Other cities haven’t been so willing to bash bigotry with such speed and vigour, though they’ve been targets of hate since the Republic pronounced itself a democracy early this century.

Eight churches in other centres were bombed with coordinated assaults on Christmas Eve 2000. In May 2018 a family wearing explosive vests targeted three churches in the East Java capital of Surabaya.

They were reportedly aligned with the Jamaah Ansharut Daulah (Helpers of the State Congregation) a terrorist cell linked to the Islamic State of Iraq and Syria (ISIS).

Concerned Malang residents of all faiths occasionally gather to support the Deklarasi Malang Berdoa (the Declaration of Prayer for Malang) hoping their initiative will spread. Some killers haven’t been deterred. On Palm Sunday last year suicide bombers hit a church in Makassar.

The Malang church guardians this Christmas should know who among the multitude might have evil intentions.

Intelligence reports aren’t always reliable. Recent outrages have surprised security agencies arguing ‘lone wolf’ attacks are unpredictable. The term is a misnomer – wolves are pack animals and terrorists have links that can be giveaways.

Fortunately fanatics are few and aren’t the brightest glow-worms in the gloom of religious bigotry. Otherwise, they’d notice the church protectors spend more time dozing in the cloisters than eyeballing crowds.

If the bombers could muster enough courage to confront superstitions they’d walk with confidence into the places of worship by looking like the people they want to murder and maim. But dressing like a kaffir (unbeliever) is ironically hateful to those who specialise in hate.

In a culture where sorcery stays strong, the credulous fear close contact with other religions means they’ll get infected and inadvertently commit the sin of apostasy.

On Java where 88 per cent follow Islam, the differences are easy to spot. Christian women wear knee-length skirts, the men in suits and ties. They clutch Bibles, walk as couples or families and go bareheaded.

Moslems worship most days often in their everyday gear. On holy Fridays the men wear sarongs and walk to mosques in all-male groups carrying prayer mats.

The more inflexible like the released Bali bomber Umar Patek, show bruised foreheads as marks of piety. The women cover everything in black bar eyes, though this garb is rare.

Wahhabism, an austere version of Islam imported from Saudi Arabia, has reportedly been encouraging dress codes and funding the widespread building of new mosques.

Not all are happy with what Goenawan Mohamad, the founder/ editor of Tempo news magazine labels the ‘Arabisation of Indonesia’, undermining his nation’s traditional coexistence with other creeds.

Islam Nusantara is a home-grown moderate alternative to the rigid Middle East interpretation of Islam.

Although it’s reported that Indonesians are becoming more religiously conservative, the claim’s difficult to quantify. Polls are useless because the sample sizes are usually minuscule and taken in Jakarta.

About 75 per cent of Muslim women in Indonesia wear the headscarf according to Human Rights Watch which blames intimidation by schools and zealots; it was only five per cent in the late 1990s. Whether this is more about fashion than godliness is a contentious debate.

Like Christianity, Islam is split into factions. The largest, boasting a membership of at least 40 million, is Nahdlatul Ulama (Revival of the Scholars).

NU seems to have a grip on Malang; in the past, its members have been bloody and brutal, but now it’s pushing moderation and inclusiveness, though still anti-Gay.

This week some of its unarmed cadres will patrol streets protecting the smaller churches. We’ll soon know whether such a piecemeal approach will ensure Christmas doesn’t go with a bang. Moderates of all callings will pray so.

(The writer lives in Malang.)