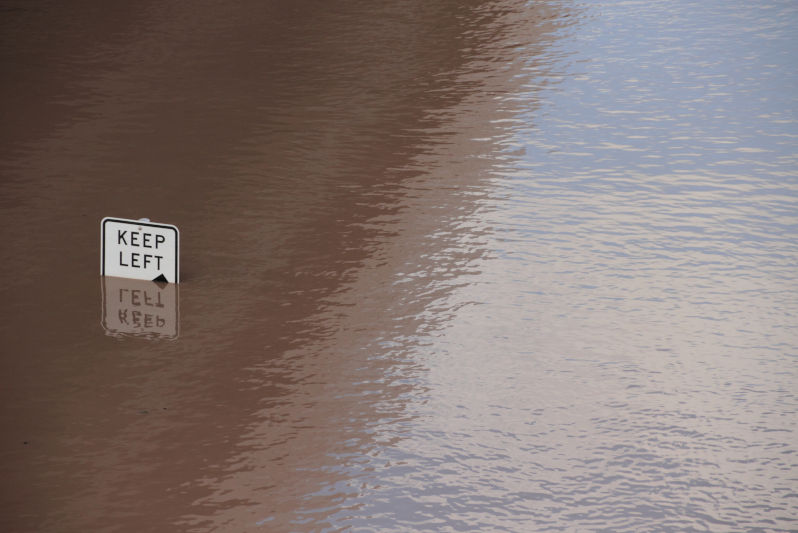 The flooding in eastern Australia over recent weeks has been serious and in some areas it has seemed never-ending.

It has led to calls being made, especially from within the Albanese government, for new and different approaches to the management of flooding. Current land use management practices particularly have been questioned as being not fit for purpose: hence talk of buybacks of flood-affected houses and more restrictive rules governing development on floodplains.

But there are other elements of our flood management that also need to be examined. Especially we need to consider how individuals respond to floods as they are developing and occurring. An area that very much needs discussion in the community and in the political arena is education about flooding and individuals’ management of it.

To begin with, too many people have little or no comprehension that they live on a floodplain. It can be hard to see floodplains (or the streams from which the floodwater comes) for the development which has covered them. Some of this development comprises the very houses in which the people live. Many, not recognising their residential situations for what they are, have little cognisance that they are at risk. We regularly hear people say they “didn’t expect” floods to affect them. They did not realise that their location was flood prone.

The truth is that being on a floodplain carries an inevitability about inundation. There is scope here for school curricula to incorporate more explicitly material on the relationships between weather, landforms and disaster, and on the real meaning of the probabilities associated with the occurrence of events in nature. The variable likelihoods of inundation between the lower and upper parts of floodplains, which are more ‘crinkly’ than flat, need to be understood. Flood events of severities that occur only rarely think Lismore earlier this year and similar cases around the nation in times past need to be understood as being inevitable even though they are likely to be experienced in specific locations only very infrequently.

Think too, as one further example amongst many that could be cited, of Windsor on the north-western edge of the Sydney metropolitan area. Windsor was not fully inundated in the Great Flood of 1867, the biggest ever seen in the area since European settlement, but most of it is metres below the level that would be expected to be reached in a flood of Probable Maximum Flood (PMF) proportions. It lies, therefore, on a part of a floodplain that can expect to be inundated only very rarely. Parts of Lismore inundated in February can be thought of similarly – never before known to have experienced inundation but nevertheless being areas for which inundation was inevitable at some stage.

School curricula, especially at secondary level, are crowded and perpetually in demand for the incorporation of new material from various angles and sources. Getting new themes into them, or tweaking existing ones to meet societal goals (in this case a more flood-aware community) is never easy.

Beyond schools, there is scope for educating via television. This is an expensive medium usually reserved for compelling health issues like lung and skin cancers, COVID and HIV/AIDS. The campaigns mounted so far to discourage such behaviours as driving into floodwaters have been cheap and not spectacularly successful. They have not broken through the fact that most people have driven through floods and have survived: the number of deaths that have occurred is a very small fraction of the number of people who have transgressed.

And myths like the notion that four-wheel-drive vehicles are safe in floodwaters come readily to mind. Such vehicles are merely slightly less unsafe in floodwaters than small sedans. The danger of risk-taking in four-wheel-drives, well known to be a part especially of male behaviour, needs to be factored into the delivery of our educational messages.

It will also be useful to consider the psychology underlying the reasons why flood warning messages often fail to produce the property-protection and evacuation actions they recommend. We need a phase shift in our approach from the one that is usually adopted: we must do more than simply command people as to how they should behave. Often, instruction comes across as lecturing that denies people agency over their decision making. It feeds an anti-authoritarian streak within us.

The ‘order’ to evacuate is never welcomed and people easily find reasons not to comply. Our education needs to be more about teaching, preferably involving two-way interactions, and less about instruction. The language of coercion, notwithstanding the fact that it is often used at moments of great and critical urgency, often produces resistance.

People need to be persuaded, not told. Credible information on what the consequences of a coming flood might mean given the forecasts made by the Bureau of Meteorology at key gauges and this can be built up from ‘flood intelligence’ derived from past floods or from studies and modelling undertaken by consultants is vital. It exists for some flood-liable communities but by no means all. Where it exists it is often coarse-grained and not always used convincingly.

That said, there are contexts in which we need to look at more heavy-handed measures. This might include ensuring that people understand they can be liable to criminal charges for irresponsible behaviour. In 2011 a Queensland man who drove through a flood, lost control of his vehicle and caused the death of his passenger was found guilty of manslaughter and went to gaol. This case has never been sufficiently publicised for what might be called its ‘propaganda’ value pour encourager les autres. ‘Opening’ closed roads by removing flimsy barriers is dangerous: it helps give following drivers the impression that taking on floodwaters is safe and therefore legitimate.

We need, too, to understand more fully the psychological drivers involved in trying to ‘beat’ floodwaters and to use them in our educational campaigns. Insurance companies, by denying payment to people who have lost their vehicles through irresponsible behaviour (such as removing barriers), already have a part to play but it needs to be better publicised.

Our community engagement practices in relation to flooding are still in their infancy, perhaps to some degree naïve in their conceptualisation and delivery. Certainly they lack a mature appreciation of the psychologies involved in people’s thinking and behaving. These practices, not always much advanced from the simple brochure-providing approaches of the past (and the information provided often highly generic in nature), need to be part of the national conversation about how we manage the threat of flooding.

Is short, our approach to engaging community members about flooding and people’s own management of it needs reconsideration, in some parts of Australia even root-and-branch reform. This needs to be part of a community discussion about how we interact with the threat of flooding. The various State Emergency Service organisations need to be deeply involved in re-thinking the forms of their engagement with their communities.