Singapore hanging would be ‘tantamount to executing a child’ 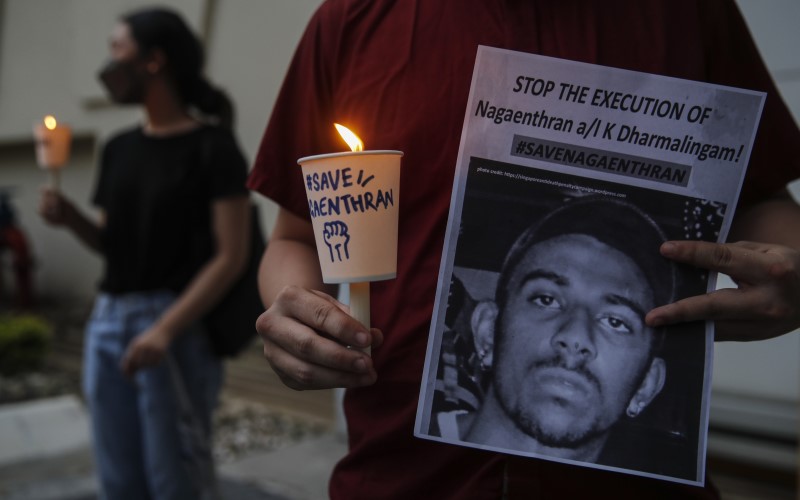 Activists are campaigning to save Nagaenthran K Dharmalingam from the death penalty. (Image: EPA/Fazry Ismail)

An intellectually disabled man on death row in Singapore has won another short reprieve, but the global campaign to save him is growing.

An intellectually impaired Malaysian man due to be executed in Singapore on Wednesday gained a last-minute reprieve as a result of contracting COVID-19.

Nagaenthran Dharmalingam’s final legal bid to prevent being hanged was to be heard by Singapore’s High Court on Tuesday but has been postponed — and the execution further stayed — because of his illness. It is unclear when the final appeal hearing will occur.

Naga has been on death row for 10 years. He was sentenced to death in 2011 after being convicted of smuggling 42.72 grams of diamorphine into Singapore.

Naga was 21 when he was arrested and charged in 2009. He has been assessed as having an IQ of 69. Nagar’s defence team have argued that his intellectual impairment and other psychiatric conditions saw him coerced and used by drug traffickers.

Singapore’s attorney-general has rebuffed those claims as have Singapore’s courts in earlier appeals.

In a statement quoted in The Guardian, the Singapore attorney-general’s office said: “The High Court stated that it is not open to Dharmalingam to challenge the court’s findings pertaining to his mental responsibility, whether directly or indirectly, in yet another attempt to revisit and unravel the finality of those findings.”

The United Nations High Commissioner for Human Rights published an urgent appeal by five expert rapporteurs calling on Singapore to definitively halt Naga’s execution. Its statement highlights “that death sentences must not be carried out on persons with serious psychosocial and intellectual disabilities.”

Former High Court justice Michael Kirby, co-chair of the IBAHRI, calls the pending execution “an affront to human dignity” and a “violation of Singapore’s obligation to ensure protection for persons with disabilities”. He goes on to express surprise that a “modern and progressive country” like Singapore is “so out of step with global human rights norms”.

In what can be seen as a significant intervention, Singapore’s daily newspaper, The Straits Times, has reported this week that Malaysian Prime Minister Ismail Sabri Yaakob has written formally to his Singaporean counterpart Lee Hsien Loong calling for leniency for Naga.

Malaysia, like many of its South-East Asian neighbours, has long had draconian drug laws with severe penalties, including the death penalty. However, since 2018, it has had a moratorium on carrying out the death penalty and has been seen as moving toward joining more than 100 other nations that have abolished the death penalty.

Legal experts have questioned whether Naga’s execution is a breach of international law. The UN’s expert rapporteurs point out, “under international law, countries which have retained the death penalty may only impose it for the most serious crimes, that is, those involving intentional killing … Drug related offences do not meet this threshold”.

Lawasia’s plea to Yacob for clemency points out that Singapore is a signatory state to the UN Convention on the Rights of Persons with Disabilities. Article 15 prohibits “torture or cruel, inhuman or degrading treatment or punishment”.

It refers to the Law Council of Australia’s Policy Statement Against the Death Penalty which states, “the practice of the death penalty, necessarily, constitutes torture and cruel, inhuman or degrading treatment in that it is impossible to avoid torture, cruel, inhuman and degrading treatment in the methods of execution and the living conditions of people on death row”.

Long-time opponent of the death penalty Sir Richard Branson has not only added his voice to the campaign to stop Naga’s execution but, in an extensive post, also seeks to debunk the myth that the death penalty has a deterrent effect on both supply and demand of illicit drugs.  “Nothing”, he argues, “could be further from truth”.

It is a claim supported by anti-death penalty campaigners throughout the world who point out that there is no persuasive evidence that the death penalty, or indeed draconian penalties more broadly, have any impact on drug supply and usage.

Amidst these pleas on Naga’s behalf is the man himself. On Monday, The Sydney Morning Herald reported on a draft affidavit given by Naga’s brother. It speaks of Naga being “very disorientated”. He is “taking three-hour baths” and “talking to him feels like talking to a child who doesn’t comprehend much beyond the recent moment”.

Naga’s family, too, are suffering. CNN reports Naga’s older sister, Samilia Dharmalingham as saying the family is “struggling”. And, in a more recent cruel twist, she says “we have been told by the prison that we will not be able to visit him anymore, and that we will only be allowed phone calls with him”.

When Naga’s appeal to Singapore’s High Court resumes, it will be his last chance to prevent his hanging by judicial order. If he fails there, only a presidential pardon can spare his life.

If a presidential pardon is not given, Singapore will be carrying out its first execution since 2019. It will be executing an intellectually impaired, psychologically-compromised and disorientated young man. N. Surendran, a lawyer representing Naga, described him as having “no real clue of what is going to happen to him”. He adds, with excruciating poignancy: “it would be tantamount to executing a child”. 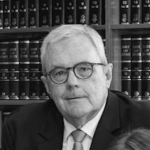 Peter Murphy has had a distinguished career as a lawyer, advocate and judge. Having retired after 10 years as a justice of the Family Court, Peter has returned to his early love, journalism.