On 14 April 2020, US President Donald Trump announced a halt on US funding to the World Health Organization (WHO) as his administration reviews its handling of COVID-19.

The US government is the largest funder of the WHO with its assessed and voluntary contributions accounting for about 15 per cent of its total biennial budget of US$4.5 billion. 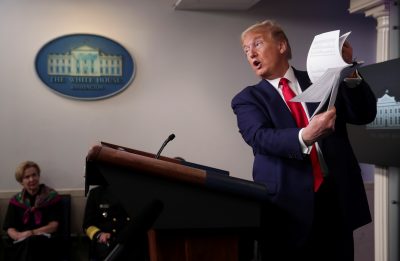 Trump accused the WHO of ‘severely mismanaging and covering up the spread of the coronavirus’ in what appears to be an attempt to deflect media criticisms of his own initial inaction.

His bashing of the WHO is also based on a suspicion of their leaning to China’s interest. The Trump administration has been hinting the virus came from the Wuhan lab and denounced Chinese government for having concealed the true extent of the outbreak. On the other hand, Chinese state media and public officials have suggested the virus originated outside of China and claim that the United States is responsible for the spread of COVID-19. To help denounce US claims of China’s covering up, Wuhan officials have recently raised the original death toll by 50 per cent.

The world’s two largest economies are attacking each other rather than cooperating in the fight against the deadly virus. Richard Haass argues that the absence of a global US role in COVID-19 is demonstrating its already precipitous decline in international affairs and a manifestation of the chaotic international society. China seems not to be an alternative leader either, only engaging in assisting masks and protective suits for its own international influence. This is a dangerous sign for the weakening of international organisations, particularly the WHO. A diplomatic war motivated by US and Chinese domestic needs will undermine the financial stability and politicise the leadership of international organisations.

COVID-19 is the first pandemic that the world has experienced since globalisation really took off, hitting developed nations hardest first. The most affected countries so far include the United States and those in Europe — Italy, Spain, the United Kingdom and France. This contrasts previous epidemics such as Ebola, West Nile virus and HIV/AIDS that were mostly limited to certain areas in developing countries.

Due to a lack of resources and administrative incapacity, developing countries have historically been more willing to cooperate with the WHO and other international NGOs. But this time, COVID-19 outbreaks have so far befallen the more developed countries with advanced healthcare systems supported by able governments taking independent measures to handle the virus — sidelining the WHO.

The WHO revised its International Health Regulations (IHR) after the SARS outbreak in 2005 to strengthen its independent disease surveillance capacity. Under the newly revised IHR, the WHO is supposed to foster a network of domestic healthcare systems across borders and offer standard guidelines to national health authorities. Yet it took the WHO weeks to draft technical guidance and scientific briefs after COVID-19 was first reported in December 2019. There is also still no visible sign that the WHO is working to link health authorities in affected countries to coordinate cooperation.

An effective contagious and infectious disease response relies more on intergovernmental cooperation than supranationalism compared to financial or trade governance. But governance over COVID-19 is divergent and fragmented. Regional organisations are almost invisible in coordinating an effective transnational response.

The European Union is the most consolidated regional organisation in the world, but failed to provide border quarantines inside their Schengen Area. The EU health agency — the European Centre for Disease Prevention and Control — continues to offer mere situation reports instead of effective measures for containing the virus.

In East Asia, where COVID-19 outbreaks started earlier, countries had only the WHO to rely on for guidance. When left with no persuasive guidelines, Taiwan, Singapore and Hong Kong acted independently to introduce aggressive travel bans while South Korea engaged in mass testing and Japan took more relaxed measures.

The WHO’s problematic public relations management has added to its dent. The delayed declaration of COVID-19 as a ‘pandemic’ is a controversial case in point. The uncritical acceptance of Chinese government statements by WHO Director-General Tedros Adhanom Ghebreyesus — including those condemning travel bans to and from China as unnecessary and reiterating China’s initial claims on the nature of the virus’ spread— has made the WHO appear subservient to Chinese interests. Media reports alleging his election to Director-General came with Chinese support further undermines institutional integrity.

Tedros’ seemingly pro-China stance adds to regional discontent, especially with the rise of antagonistic sentiments towards China after the first wave of COVID-19 broke out in East Asia. Experts argue the WHO’s full endorsement of the Chinese government’s statements is typical of its long-accustomed kowtowing to its main funders. To prevent this type of dilemma, it would be far desirable to have developed countries other than the United States and China, as well as private foundations, increase their proportional contributions to international organisations.

The WHO is likely to be sidelined further unless it improves its performance in the upcoming alleviation stage of the virus. There is an expectation, for instance, that they will lead the effort to make vaccines more accessible and affordable in cooperation with pharmaceutical companies.

This pandemic will also be remembered as a test of the European Union’s crisis management capability. While Brussels struggles in its containment and mitigation of the virus, it will need to exercise improved leadership in the post-COVID-19 economic recovery stages.

The ill winds that the coronavirus has brought upon international organisations can be stopped only if national governments cooperate and drive collective action. ‘America First’, ‘Corona-exit’ policies and Chinese propaganda cannot protect people from this deadly virus that transcends national borders.

Sook Jong Lee is Professor of Public Administration at Sungkyunkwan University, Seoul, and head of the Asia Democracy Research Network (ADRN). She is a member of the Trilateral Commission and formerly president of the East Asia Institute.