SOPHIE VORRATH. Coal to be kaput in Australia by 2050, as renewables, batteries take over

Australia’s coal-fired generation capacity could be little more than a twinkle in Tony Abbott’s eye by as early as 2050, when it will have been all but snuffed out by cheap renewables and battery storage, and household energy investments. 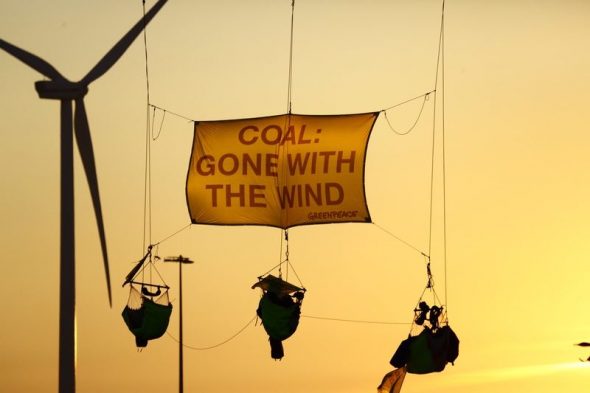 The latest National Energy Outlook from Bloomberg New Energy Finance, predicts Australia will generate all but 8 per cent of its electricity from renewable energy sources by 2050, as dramatic reductions in battery storage costs boost solar and wind uptake.

The report, published on Tuesday night in Australia, neatly pole-vaults over the current national energy policy mire to forecast a six-fold growth in renewable capacity for Australia over the next 30-odd years, as technology and economics take over. 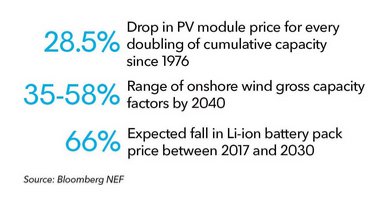 In fact, according to the NEO, renewables overtake fossil fuels as the major source of energy generation in Australia as early as 2031, before supplying 92 per cent of the total in 2050.

Renewables and storage make up 87 per cent of all new capacity additions to 2050, representing a $US138 billion ($A187 billion) investment opportunity.

By then, the report says, utility- and small-scale PV will have surged to 75GW, and wind to 48GW, while battery storage capacity will boom to at least 27GW in 2050 – the vast majority of which (23GW) will be installed by households and businesses behind-the-meter.

This behind the meter investment is significant and represents a reshaping of the grid. Together with demand response, behind-the-meter PV and storage will make up 44 per cent of total power capacity in Australia in 2050.

The solar capacity on household and business premises will supply more energy than coal in 2035, and nearly one quarter of Australia’s energy needs in 2050. Australia’s power system will be one of the two most decentralised in the world,

And by 2050, electric vehicles make up around 76 per cent of all new car sales in Australia, and 75 per cent of the total car fleet. Some 47TWh (14 per cent) of national electricity production will be used to charge EV batteries, but this also represents a flexible resource.

“Australia’s power sector is rapidly reorienting itself based on the economics of clean energy,” said Kobad Bhavnagri, head of BNEF in Australia. “New technology has set a path for Australia to achieve near-zero emissions power by 2050.

“The future grid will be underpinned by cheap wind and solar, with batteries and pumped hydro helping to smooth out the variability, and with more expensive gas acting as a fail-safe.”

For its part, BNEF says gas capacity will need also to increase, rising from 18GW today to 23GW in 2050, “to provide reliable supply in the rare periods when the wind is not blowing and the sun is not shining.”

For coal, however, the news is all bad. Bloomberg NEF sees its share of the generation mix falling from 25GW in 2017 – when it was the source of 65 per cent of the country’s electricity – to 23GW in 2025.

By 2050, BNEF expects coal to be gone almost completely from Australia’s generation mix – although the report does stress that this is “assuming there are no government attempts to save it with subsidies;” something certain Coalition members are currently working so hard to do.

“New coal will not be able to compete with increasingly cheap electricity from wind and solar, balanced with battery storage and other flexible technologies like hydro and gas,” he said.

“As existing coal generators reach end of life, they will not be life-extended or replaced.”

All this happens against a global backdrop where BNEF sees wind and solar surging to almost “50 by 50” – 50 per cent of world generation by 2050 – also largely due to the advent of cheaper and cheaper batteries, enabling electricity to be stored and discharged to meet demand and supply.

Indeed, the key focus of the report – which is based on eight months of analysis and modelling by a 65-person Bloomberg NEF team – is the huge impact of falling battery costs.

This is particularly pronounced for lithium-ion battery prices which, already down by nearly 80 per cent per megawatt-hour since 2010, are expected to continue to tumble.

“We see $US548 billion being invested in battery capacity by 2050, two-thirds of that at the grid level and one-third installed behind-the-meter by households and businesses,” said Seb Henbest, the lead author of the NEO 2018, and head of BNEF in Europe, the Middle East and Africa.

“The arrival of cheap battery storage will mean that it becomes increasingly possible to finesse the delivery of electricity from wind and solar, so that these technologies can help meet demand even when the wind isn’t blowing and the sun isn’t shining.

“The result will be renewables eating up more and more of the existing market for coal, gas and nuclear.”

NEO 2018 sees $US11.5 trillion being invested globally in new power generation capacity between 2018 and 2050, with $US8.4 trillion of that going to wind and solar and a further $1.5 trillion to other zero-carbon technologies such as hydro and nuclear.

The levellised cost of electricity, or LCOE, from new PV plants is forecast to fall a further staggering 71 per cent by 2050, while that for onshore wind drops by a further 58 per cent.

As BNEF notes, these two technologies have already seen LCOE reductions of 77 per cent and 41 per cent respectively between 2009 and 2018.

As for coal, it is forecast to be “the biggest loser” on the global stage, too.

“Beaten on cost by wind and PV for bulk electricity generation, and batteries and gas for flexibility, the future electricity system will reorganise around cheap renewables – coal gets squeezed out,” said Elena Giannakopoulou, head of energy economics at BNEF.

Conversely, the role of gas generation “will evolve” with the greater energy market, BNEF says, when it will be increasingly built and used to provide back-up for renewables rather than to produce “base-load” electricity.

BNEF sees $US1.3 trillion being invested in new capacity to 2050, nearly half of it in ‘gas peaker’ plants rather than combined-cycle turbines. Gas-fired generation is seen rising 15% between 2017 and 2050, although its share of global electricity declines from 21% to 15%.

And what does all this mean for emissions? Bloomberg NEF says the bad news for coal is good for global pollution levels – although not good enough.

But this would still see the global electricity sector fall short of its part in the effort to keep global CO₂ levels below levels consistent with limiting the rise in temperatures to less than two degrees Celsius.

“Even if we decommissioned all the world’s coal plants by 2035, the power sector would still be tracking above a climate-safe trajectory, burning too much unabated gas,” said BNEF energy economics analyst Matthias Kimmel.

“Getting to two degrees requires a zero-carbon solution to the seasonal extremes, one that doesn’t involve unabated gas.”

This article first appeared in RenewEconomy on 19 June 2018