The growth in COVID-19 cases in Australia appears to have slowed across all states, through a combination of tighter border control and spatial distancing.

With the number of new cases each day growing at a slower rate, there is a chance the coronavirus pandemic can be brought under control and dealt with in our existing public hospital system – even without help from the private system.

As testing expands, we’ll have a better idea of how the health system will cope. But here’s what we know so far.

The number of new COVID-19 cases in Australia has flattened over the past five days. 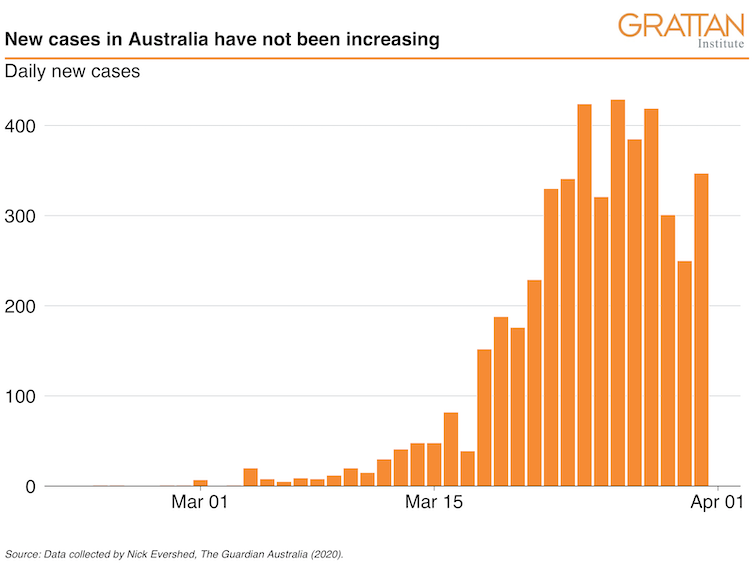 This is not just because new arrivals have slowed with much tighter border controls, and the slump in international air travel. The number of new local infections each day is also not growing. 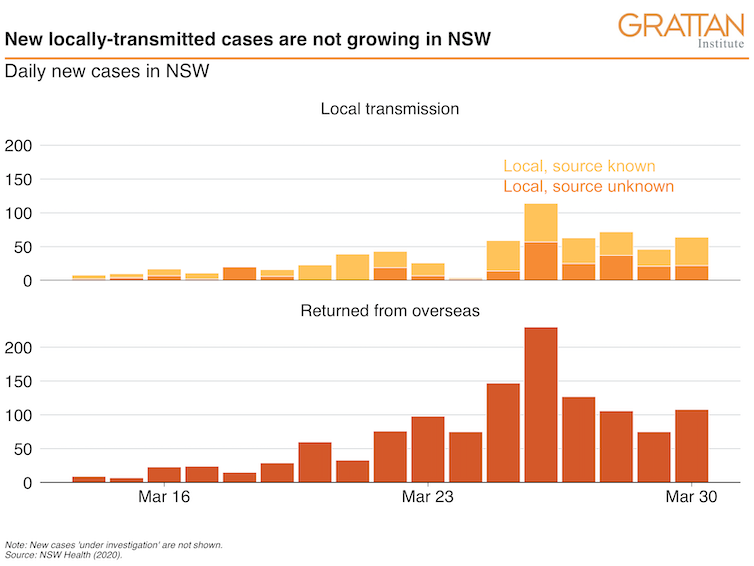 For most of March, the total number of cases doubled in Australia every three to four days. That rate has now slowed to doubling every six to seven days. 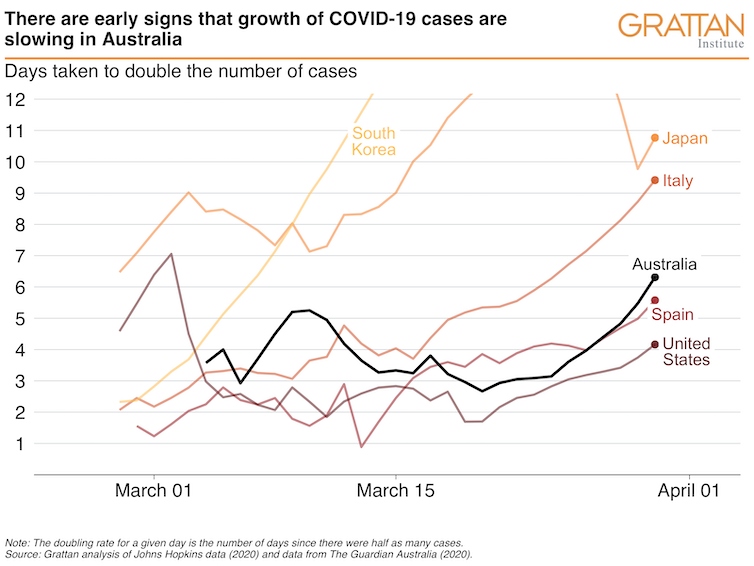 The chart below shows this slowing occurred in each state that has a significant number of COVID-19 cases, and consistently from March 20. 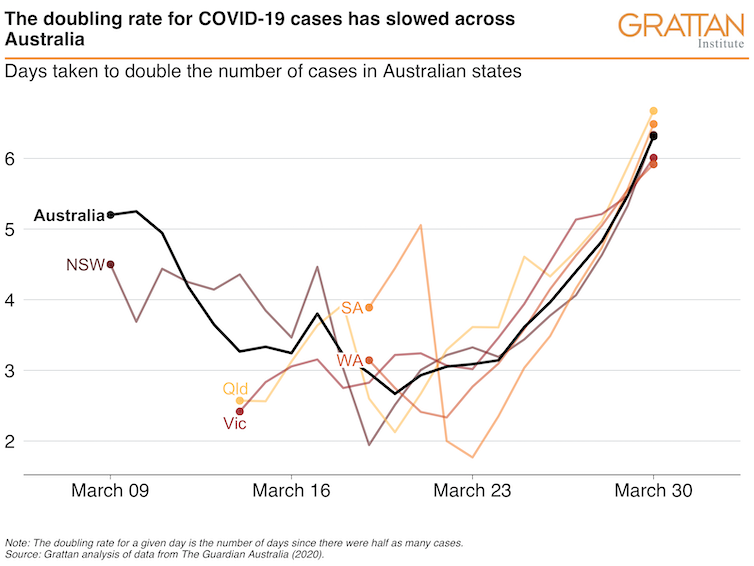 On March 16, gatherings of more than 500 people were banned and all international arrivals were required to self-isolate for 14 days.

The health system will probably cope

Slowing the growth of new cases will ease pressure on the hospital system.

If we continued to double the number of cases every three to four days, we would have hit the then-capacity of intensive care units (ICUs) of about 2,200 beds in about mid-April when the number of new cases hit 12,000 per day. Doubling or even tripling the number of ICU beds would have delayed the crunch by a week.

At the current doubling rate, of six to seven days, that crunch would hit in early May.

But the doubling rate is falling and so that crunch time will probably be pushed out even further.

The slower COVID-19 spreads, the more time we get to prepare health systems and increase the capacity of ICUs, where necessary. 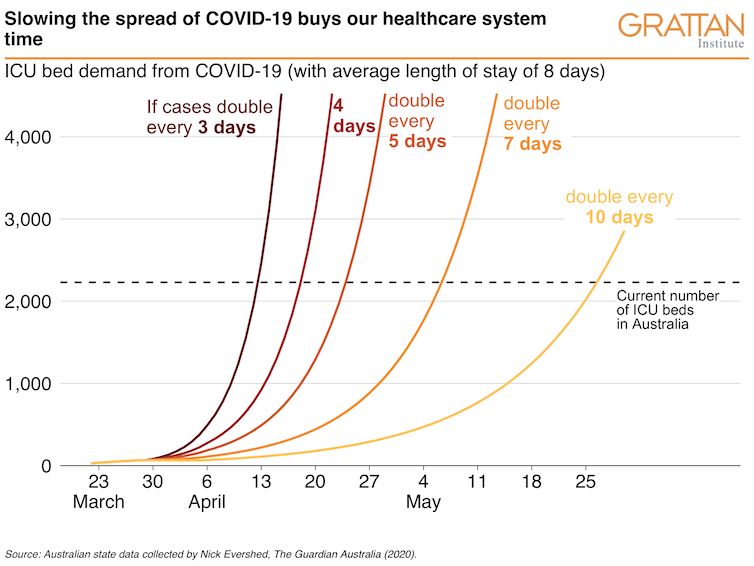 Over the past week, the growth pattern has slowed and shifted from the exponential doubling to a linear trend with the number of new cases in Australia increasing by about 350 per day. If this rate continues, Australia’s current ICU capacity will be able to cope.

But it is still early days. And our current testing regime may not be shedding as much light on community transmission as we need. With limited community testing, and a disease which is asymptomatic or mild for many, we don’t know how far infections have spread into the community and so we don’t know the actual number of new cases each day.

But we need to test more broadly to understand the spread

With more than 250,000 COVID-19 tests so far, Australia has a high testing rate compared to other countries. 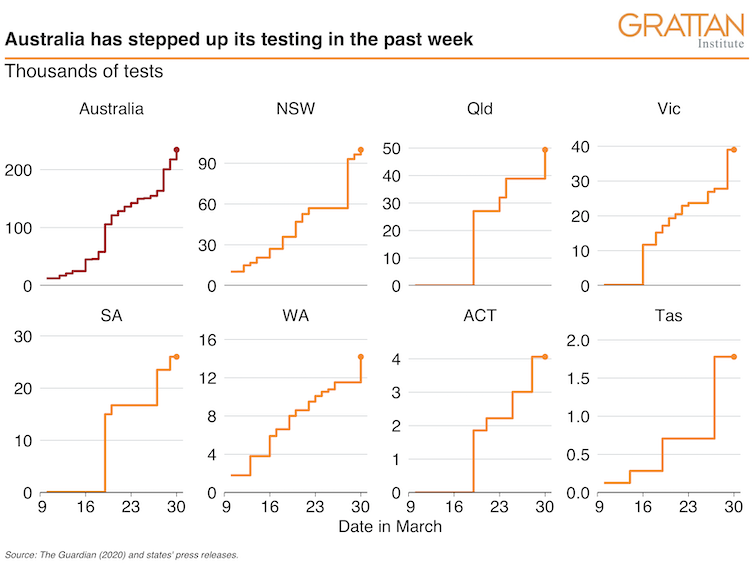 But the number of testing kits has been limited, so Australia has done “targeted” rather than “widespread” testing.

The Commonwealth government previously advised doctors to limit testing to people who develop a respiratory illness and have either returned from overseas or been in close contact with a confirmed COVID-19 case in the past fortnight.

As the restrictions on international arrivals kick in, community transmission will become the main source of COVID-19 risk.

The Commonwealth government last week expanded the testing criteria to people who have fever or acute respiratory infection and are in an at-risk group (for example, a health worker) or setting (such as a geographic area with confirmed clusters of cases). 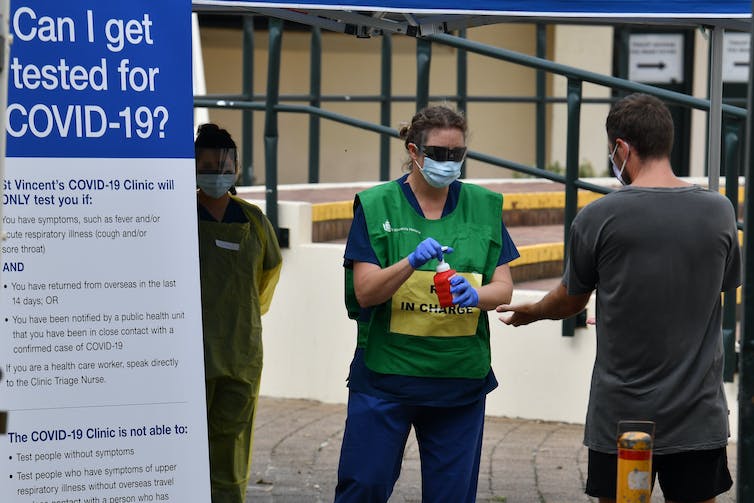 Nursing staff from St Vincent’s Hospital see local residents and backpackers at a COVID-19 testing clinic in the Bondi Pavillion on Bondi Beach in Sydney, Wednesday, April 1, 2020. The clinic has been set up as the number of cases continue to rise in the eastern suburbs. AAP

Victoria has introduced randomised testing at its screening centres to get a better understanding of how the virus is spreading. This involves testing every fifth person who presents at the clinic, in addition to those who meet the testing criteria.

As overseas cases fall and our testing capability rises, all states should implement some form of randomised testing in the community.

As the testing criteria is further relaxed and picks up more cases of community transmission, we will get a better understanding of how the virus is spreading in the community. Only then can we be confident about the adequacy of our health system in the coming months.