STEPHEN DUCKETT. Assisted dying is one thing, but governments must ensure palliative care is available to all who need it

The debate in the Victorian Parliament about assisted dying has tended to focus on the terrible personal experiences of deaths of family members. That focus is understandable, but it has been at the cost of consideration of the need for much more attention to the need for better palliative care.

Assisted dying moved one step closer to reality in Victoria last week with the authorising bill passing the lower house with a comfortable 47-37 majority. Throughout the debate, many MPs spoke of terrible personal experiences of the deaths of family members. Such harrowing stories were also present in submissions to the parliamentary inquiry into end-of-life choices, that recommended an assisted dying regime leading to the bill.

These terrible deaths were most often used to argue in favour of the need for assisted dying. Yet they occurred in a state that prides itself on the quality of its end-of-life services. While assisted dying is contentious, access to palliative care should not be.

Palliative care’s purpose is to enhance the quality of life for patients and their carers. It also aims to fulfil choices about care style and location for those approaching death. Politicians regularly express their support for palliative care. Yet, there is often a chasm between such positive rhetoric and actual delivery.

The gap isn’t new. A 2012 Senate review expressed concern at the “variance in the standard and quality of palliative care” across Australia. In April 2017, the New South Wales Auditor General was scathing in her criticisms of the state’s services, and in 2015 the Victorian Auditor General highlighted “room for improvement” – this in a state recognised as having the gold standard in palliative care.

A report by the Grattan Institute in 2014 also identified a need for better end-of-life services across Australia.

Read more: Palliative care should be embraced, not feared

The 2010 National Palliative Care Strategy – that sets out areas to focus on in palliative care – is a worthy, well-received document, saying all the right things. But a review of the strategy conducted at the end of 2016 found little evidence states had used it in developing their frameworks for delivering services. It also found limited accountability or evaluation mechanisms and little detail about vulnerable populations.

What statistical information we have about the extent to which palliative care services meet patient and carer needs comes from voluntary reporting based on meeting certain benchmarks. These include targets such as having 60 per cent of patients with moderate to severe pain at the beginning of the care period, reduced to absent or mild pain at the end of the period.

It is unlikely organisations that don’t participate have outcomes as good as those that do, so this suggests what we see here may be at the upper end of outcomes. And even then, what we see is not so good. 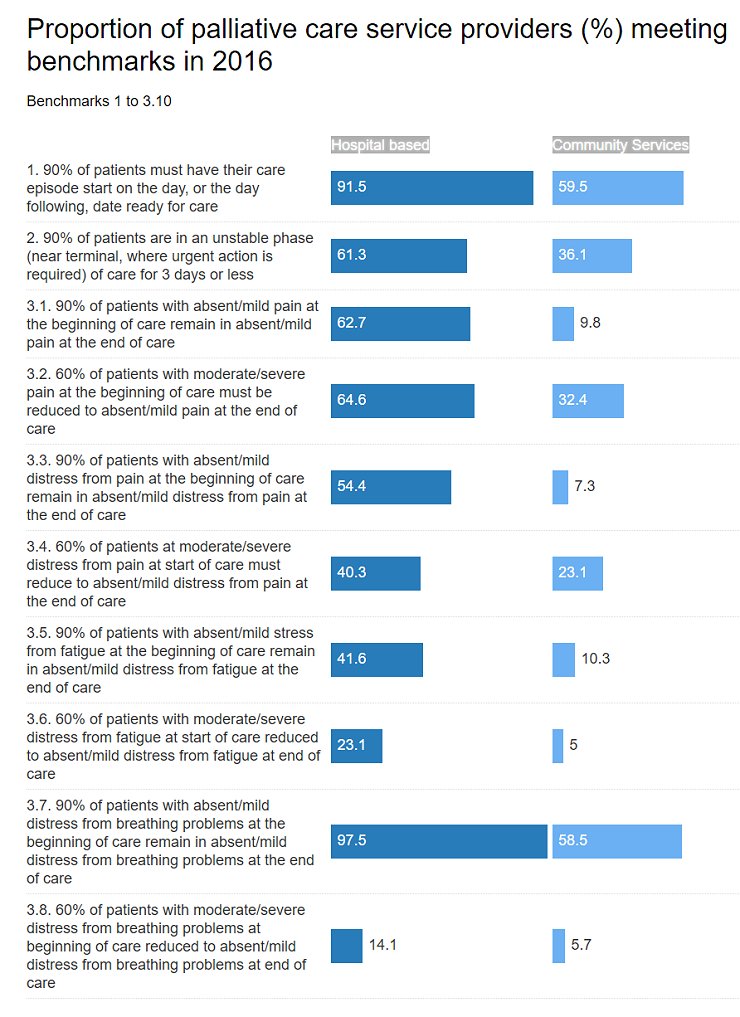 The advisory panel set up by the Victorian government to set out the framework for the state’s assisted dying regime did not make explicit recommendations about palliative care. But it did note

A person has the right to be supported in making informed decisions about their medical treatment and should be given, in a manner that they understand, information about medical treatment options, including comfort and palliative care.

Provision of information is one thing, but access to services is another. Again the panel has nice words, stating

every person approaching the end of life should have access to quality care to minimise their suffering and maximise their quality of life.

But this rhetoric is not given any force in the panel’s recommendations.

When Victoria’s upper house, the Legislative Council, makes its decision about the assisted dying legislation, it should also ensure every terminally ill person in the state can get good quality palliative care if they want it.

The Victorian government’s response to the report of the parliamentary inquiry, that recommended legalising assisted dying, has been strong on support for enhanced palliative care. This welcome rhetoric now needs to be translated into effective policies – and more money.

Palliative care is an important part of end-of-life care. A 2010 study in the prestigious New England Journal of Medicine showed that people who received palliative care as they were nearing death actually lived longer than those who pursued aggressive treatment. A Grattan Institute report in 2014 showed increasing investment in palliative care would lead to better care and could save money.

One would think governments would do all they could to ensure palliative care is available to all who need it, and to put funding of palliative care on a sound footing. Sadly, that is not the case in Australia today.

Read more: Why the seemingly tidy, leaked proposal for hospital funding may be a problem policy

There is no incentive for these organisations to seek out and help people who might benefit from palliative care. It is possible Victorians are missing out on palliative care because of this poor funding design.

Although state budgets are limited, the lid on palliative care funding should be lifted. The risk of a budget blow out is slim. After all, palliative care is for the dying, and the number of deaths is increasing very slowly – about 2% (1,000 deaths) each year.

Of course, removing the cap on funding should be accompanied by a push to ensure the money is not wasted on inefficient or poor quality services. A new funding regime should be based on the requirement services are provided at or below national efficiency benchmarks. A broad suite of indicators should be used to assess the performance of palliative care organisations. The results should be published regularly, with bonuses paid to good performers.

The Victorian parliamentary debate about assisted dying has been emotional. But whatever the parliament ultimately decides, our politicians should commit to making palliative care available to all who are terminally ill.

Professor Stephen Duckett is Director of the Health Program at Grattan Institute and Emeritus Professor of Health Policy at La Trobe University. He has held senior positions in health policy in Australia and Canada, including as Secretary of what is now the Commonwealth Department of Health and Ageing.

This article is a re-post from The Conversation, 24 October 2017.