A sociology of Q&A: what is addressed, what is missed? 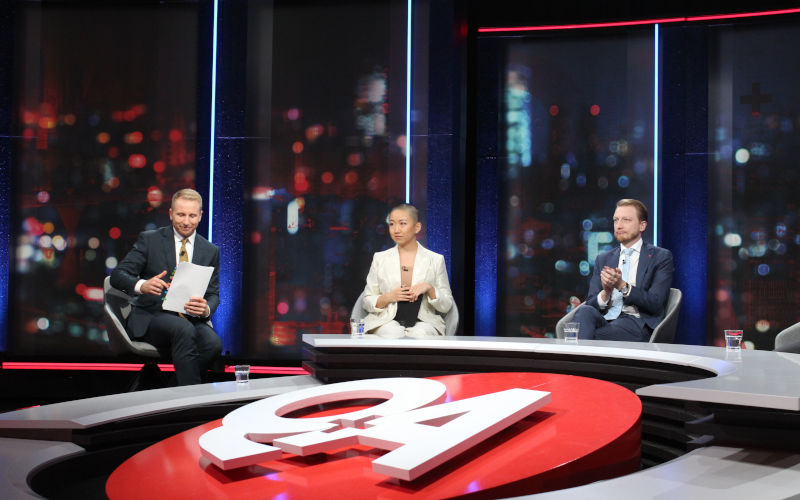 Q&A is not a political party, but it provides a place where fundamental questions about the future can be aired. Image: Wikimedia Commons

Branded as the occasion when the public asks questions and a panel of experts give answers, ABC televisions’ Q&A misses an opportunity to inform let alone inspire their audience.

As though instructed to entertain, panellists’ quick fire observations inhibit appraisal of the country’s future, and instead, the fresh analytical air comes from those who ask the questions, from hashtag observations crossing the screen or, in the case of last Thursday’s programme, from an astute chair, in this case Virginia Trioli. A Q&A culture which encourages dabbling in the obvious but discourages inquiry into change towards a common good, was on display last Thursday.

A question whether major political parties respected constituents considered religious, prompted Ann Rushton for the Coalition and Clare O’Neill for Labor to protest their heartfelt communication with interfaith groups. In protesting too much, they missed the chance to remind their audience that ethical conduct and policies derive as much from principles of universal human rights as from the beliefs of constituents with religious faith.

Posed by Trioli from the chair, the next question threw the overdue curve ball as to why, after nine years of incarceration, a handful of refugees, have just been released, albeit with little money and reminders that they should not expect to stay. Marinated with cruelty, the government’s spokesperson repeated the robot like answer about security by protecting borders from boat people, thereby preventing ‘death ships’; and to display Australia’s respect for human rights, billions spent on imprisoning powerless people were justified.

The Q&A culture does have room for humanitarian aberrations. Comedienne Steph Tissel demanded, ‘Messaging about boat people is dehumanising. What about the treatment of First Nations people?’ From the studio audience, the man who asked the earlier question about religion, scorned the idea that humanity could be shown by refugees’ nine years of punishment, ‘Every minute of an individual’s life is valuable.’

An insightful question about climate change came from a Gladstone resident who described transition to a changing economy and different employment opportunities. Her cue was missed. Gideon Rosner, Policy Director for the Institute of Public Affairs (IPA) stressed that as Australia was blessed with coal, iron ore and gas, these resources should be sold to the highest bidders.

By repeating ad nauseam claims that their parties would reach zero greenhouse gas emissions by 2050, the politicians on the panel overlooked the vision from Gladstone. Unduly influenced by the fossil fuel industry but unwilling to admit it, and even as NSW towns sink beneath floods, they served the audience a diet of alleged percentage reductions in emissions. At which point a hashtag operator sent a message to the effect, ‘Addressing climate change is the country’s number one priority, and the number two priority and… ?’

A Q&A long term effects question came in regard to Labor leader Albanese’s promise to put a registered nurse in every aged care home. Yet the potential humanitarian benefits of such a policy were missed in discussion about financial costs and how they would be met. Trioli, to her credit, raised the juxtaposition of $5.5 billion compensation paid for a cancelled submarine contract compared to the costs of high standards of care and of better food for the frail elderly, but the ensuing exchanges were lost in a maze of dilemmas as to which way to turn to find sufficient, well trained, well paid staff.

Clare O’Neill proved unwilling to concede that recruiting, training, motivating and keeping staff for a visionary, humanitarian project would have to be the foundation of her leader’s policy. Safe performance on Q&A plus anticipating a need for quick answers on election hustings seemed to deter analysis of the difficulties of selecting and training anyone for a new profession.

The Prime Minister’s challenge from an an elderly pensioner in a Newcastle pub prompted a Q&A question about the disincentives for anyone on a disability pension to return to employment. At stake were the income tests on pensioners whose benefits would be cut if they obtained a job and earned above an income test limit. Instead of analysis which identified the human and financial costs of Centre Link paraphernalia, and the associated punitive robot debt recovery programme, panel discussion concentrated on the terms of different pensions albeit diluted by sympathy for the predicament of the Newcastle pensioner and thousands like him.

Even in a question which referred to pensions and poverty, the Q&A tradition of inviting panellists to provide entertainment by arguing, seemed to inhibit thought about who we are, what does the country stand for? The disability question could have highlighted the national benefits from a universal basic income of the kind introduced by Job Keeper payments when Covid first struck. Highly beneficial. Almost reduced poverty at a stroke. Redefined the nature of work. Not exactly revolutionary yet too radical to become permanent, and on Thursday we did not hear about those Covid prompted initiatives which could foreshadow economic and social structural change.

Q&A is not a political party, but it provides a place where fundamental questions about the future can be aired. Despite crafting and conducting many high standard programmes, a culture to encourage infotainment by dabbling in the latest tasty controversy too often misses the chance to foster a beneficial national conversation.