To end war, a language of peace, for Ukraine and for Russia 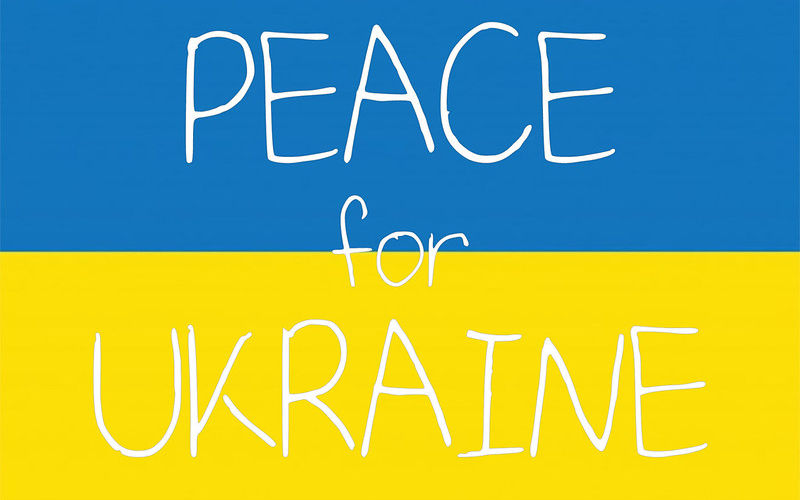 Peace in Ukraine includes support for refugees and for generous aid to enable Ukrainians to rebuild their cities. Image: Flickr / Brandon Oh
Despite hatreds generated by aggression and slaughter, a ceasefire in Ukraine depends on respect for the dignity of all parties and on their potential to recognise a common humanity.

This will be difficult, but in ‘Human Family’, the poet Maya Angelou noted common ground:
‘I note the obvious differences
between each sort and type
but we are more alike my friends
than we are unalike.’

Angelou’s lines are a primer for speaking about the interdependence of all people in language which is crucial for ending war in Ukraine and for addressing any violence threatening life on earth.A ‘talk and no action’ accusation may be one response to this emphasis on a language for peace, but if peace talks are to be successful, there has to be rehearsal by learning and speaking key lines.

Before reaching specific examples relevant to Russia’s war on Ukraine, consider the insights of the poet Denise Levertov who wrote brilliantly about ‘Making Peace’. She advised that peace requires ‘a grammar of justice, syntax of mutual aid.’ In observations for everyone, not just participants in a war, in domestic violence or in bullying, she wrote, ‘A line of peace might appear if we restructured the sentence our lives are making, revoked its reaffirmation of profit and power.’ She concluded that such outcomes would not be easy because peace is ‘a presence, an energy field more intense than war.’

In Ukraine-Russia peace talks underway in Istanbul, the cliché ‘speaking truth to power’ may have to be abandoned. Peace realism teaches that the language of power is seldom the language of truth.

In peace negotiations, powerful men have to climb down, no longer swagger, find a touch of humility. Support for Ukraine from the US and it’s western allies, would require admission that despite charging Putin with war crimes, no one side can claim the high moral ground. Hypocrisy has to be acknowledged. The US shock and awe bombing of Baghdad, the loss of hundreds of thousands of Iraqi lives looks little different from the shelling of Mariopol and the displacement of four million Ukrainian refugees.

It may be fair comment to say that Putin is driven by a perverse reading of history and that he denies his neighbour’s humanity, but a climbing down stance also requires the west’s admission that the Kremlin was justified in perceiving the NATO advance to Russia’s borders as an unwarranted threat.

In searching for a language of peace which avoids accusation and counter accusation, the rhetoric about Ukraine being dominated by neo-Nazis should be set in context. Commentators who see themselves as from the left, have been arguing that the US is responsible for everything and that a brand of Ukraine fascism justifies the Russian onslaught. A slanging match about alleged Nazis in Ukraine should avoid that easy one side rather than the other attitude. Questions will have to be asked, not just about trends in Ukraine, but also about a taste for racism and fascism among right wingers in the US, the UK, across Europe, in Russia and Australia?

The supply of arms to Ukraine and to NATO nations still derives from a winner takes all, punish the losers policy reminiscent of the Treaty of Versailles which ended the First World War and set conditions for the Second. In a lexicon for peace, victory has no place. About the invasion of Iraq, who could forget President George W. Bush’s boastful but absurd aircraft carrier claim ‘Mission Accomplished’. It is also worth remembering that the leaders of defeated powers do not eat humble pie, seldom confess to errors, let alone promise to pursue justice.

Priorities for peace in Ukraine include support for refugees and for generous aid to enable Ukrainians to rebuild their cities, craft their democracy. Respect for the agency of the Ukrainian people is a life giving theme for peace. In the same vein, the current demonising of Russia and Russians should be replaced by regard for that country’s citizens’ and their aspirations. That is not just a reference to brave individuals who defy a dictatorship, but also to recognition of massive Russian casualties in the war and of Russians suffering the consequences of sanctions by the US and the EU. Healing and rebuilding will also need to occur in Russia.

Language for peace holds to the prophecy that threats to human existence come from climate change, from grinding poverty and the persistence of pandemics. In which case, why the idea that any country’s security depends on militarism and weapons of war? A common enemy, perceived in melting tundra in Siberia, floods in Australia, Brazil and Germany, devastating fires in Canada and California has the potential to revive visions of a common humanity.

Those visions require enthusiasm for non-violence and the mutual aid which represents far more than an absence of war. In Denise Levertov’s judgment, such language would provide ‘a vibration of light’, an ‘act for living’, a rhythm for existence which is probably ‘all we have.