Sunday environmental round up, 1 November 2020

Illegal, Unreported and Unregulated fishing presents a major threat to security and fish stocks. Seagrasses and snow leopards suffering from environmental destruction. Aussie coal companies turning to the Canadian Rockies. Insights into what might be influencing American votes on Tuesday.

What do you think the United States Coast Guard regards as ‘the leading global maritime security threat’? Piracy? Refugees? Terrorism? Cruise ships behaving like Petri dishes? None of those. It’s Illegal, Unreported and Unregulated (IUU) fishing in international waters and within national jurisdictions. According to the Coast Guard, IUU: ‘erodes both regional and national security, undermines maritime rules-based order, jeopardizes food access and availability, and destroys legitimate economies [and will lead to the] deterioration of fragile coastal States and increased tension among foreign-fishing Nations, threatening geo-political stability around the world ’.

Distant Water Fishing (DWF) fleets, operating far from their base, are closely associated with IUU, as is criminal activity. China has by far the largest DWF fleet, possibly comprising 12,000 ships, most of which probably operate legally. Between them China and Taiwan make up 60% of the DWF industry, with Japan, South Korea and Spain having 10% each.

By way of background, in 2018 84 million tonnes of marine fish (see pages 2-4 of the link), which includes crustaceans and molluscs but excludes aquaculture, were harvested. IUU accounted for about 20% of this. The marine catch has remained constant for 30 years but aquaculture has been increasing, resulting in a quadrupling of marine fish consumption over the last 60 years. It is expected to double again between 2018 and 2030. Fish currently provides almost half the world’s population with 20% of their animal protein intake. In some countries it’s over 50%. 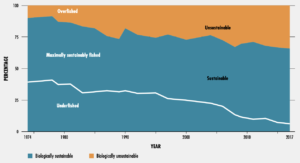 Staying watery, Seagrasses are aquatic flowering plants that form meadows in temperate and tropical coastal waters.  They don’t receive as much attention as coral reefs and rainforests but they are among the most valuable, vital and threatened ecosystems. For instance, they provide homes, nurseries and refuges for fish, crustaceans and molluscs, and hence are an essential element of food chains for marine animals and humans. They also stabilise sediment, capture and hold carbon just like land plants, release oxygen into the water and stabilise shorelines. But they need clear water and sunlight and once destroyed they can be very slow to recolonise an area, taking up to 10 years to reach maturity and centuries to form meadows of 1km2.

For the last century seagrasses have been in decline globally, including around Australia which has about 50,000 km2 left. A recent study of one particular species at 14 sites in five estuaries along the NSW coast from Sydney to Newcastle demonstrated further losses of up to 40%  between 2009 and 2014. In Sydney Harbour the rate of loss was 10% per year. The major causes of loss are coastal developments which destroy the whole environment, fishing and boating activities and infrastructure (e.g. mooring chains, anchors, propellers, trawling) which both scour the seabed and stir up sediment, dredging and dumping of dredge, land clearing which sends sediment down the rivers, and eutrophication. Conservation efforts focus on improving water quality, providing seagrass-friendly boating infrastructure, regulating fishing activities and direct restoration.

Climate change is threatening the existence of the snow leopard in the Himalayas. Predicted increases of temperature and rainfall associated with global warming in High Asia will cause forests to ascend into alpine areas, destroying 10-30% of snow leopard habitat and bringing other predators into their territory. Humans and livestock will also move in which will increase human-leopard contact and conflict. This 9-minute video highlights that it isn’t only a majestic animal that is threatened. It’s the whole habitat and this also threatens humanity, for instance reducing the availability of fresh water to communities across Asia that are dependent on the spring melt in the Himalayas. Individual snow leopards migrate huge distances and collectively their natural habitat covers twelve countries; one-third of leopard habitat is within 100km of a national border, many of which are unfenced. Multinational transboundary cooperation will be essential for the preservation of this species.

It’s good to know that four Australian coal miners are sharing their environment-wrecking activities with Alberta, Canada rather than destroying only Australia. Atrum Coal, Cabin Ridge and Montem Resources (all with Australian connections) and Gina Rinehart’s Riversdale Resources all have plans to do mountain top removal coal mining in 800 km2  of the Rockies. Opponents are concerned about the destruction of ecosystems, pollution of water supplies for drinking and irrigation on Canada’s prairies, and damage to the tourism and ranching industries. Not unlike Australia, questions are being asked about the legality of the Albertan government’s development approval processes. Part of the explanation offered for Australian companies’ interest in Canadian coal is that our own high quality, much sought-after metallurgical coal is running short and they are looking to Canada to supply Asian and Brazilian markets.

Maybe it’s something to do with my age but I’m not a great fan of, admittedly very clever, infographics that read like a Japanese hanging calligraphy scroll. Others, however, might find this one helpful. It was prepared by the IPCC to demonstrate the possible consequences of three different approaches to climate action: late, uncoordinated action; delayed, decisive action; and early, effective action. The final ‘frame’ concludes:

With only three sleeps left (on Sunday) before we have some idea of the outcome of you-know-what, let’s finish with three items from the USA. First, an entertaining and visionary 9 minutes containing a message from the future about how the world moved from the disastrous environmental and social situation in the 2020s to a sustainable, democratic and just society. The production is incredibly clever, mesmerising even.

Entertaining in a completely different way is this 5-minute promotional video which ‘[introduces] the world’s first all-electric super-truck, the revolutionary GMC Hummer EV, with no limits, no emissions and no equals … it’s innovation engineered to ensure domination.’ It will be on sale in the USA next year for US$113,000. No mention of the embedded emissions in the massive vehicle of course.

Finally, Americans have a clear choice about climate change on Tuesday. The map below demonstrates that in all states a substantial majority of the population (ranging from 60-94%) considers global warming will be a serious problem in the USA. The bar chart indicates that 57% of voters nationally support the phasing out of the US oil industry. Even among Republican voters 41% support the phase out, with 46% opposed. But will these opinions be reflected in voting patterns? 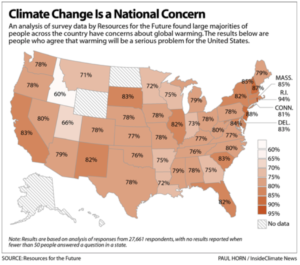 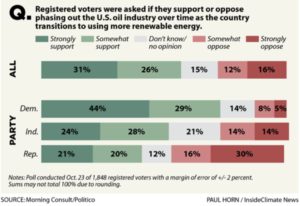 If Trump is re-elected, there’ll be more chance of these two threatened beauties changing their spots than him. 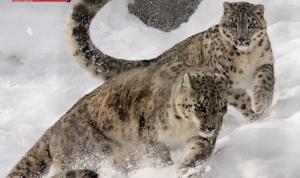