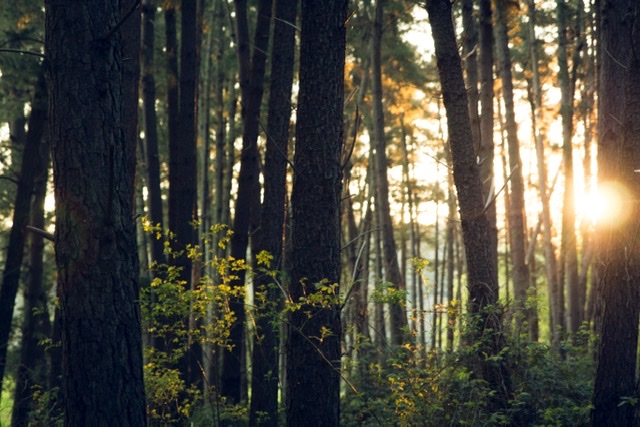 Ecosocialist advice for the G7’s leaders and encouragement to read a recent P&I article on carbon accounting. The price of solar panels is rising slightly and our sylvan friends are emitting ‘treethane’. Finally, a plea to dog owners.

The political leaders of the G7 nations (Canada, France, Germany, Italy, Japan, UK, USA, and the EU as observer) are meeting in the UK this weekend – Scotty will be there as a special invitee. If all seven nations had socialist governments and wanted to sponsor an appropriate agenda for approval at the COP26 meeting in Glasgow in November, what would be included? Well, to make life easy for our revered leaders, an agenda has been prepared by Ecosocialist Alliance. As well as action to tackle COVID-19 (a patent waiver on vaccines and more funding for the WHO), the agenda focuses on the climate crisis (e.g. keeping fossil fuels in the ground, reducing greenhouse gas emissions by 70% by 2030 compared with 1990, and renewable energy); the environmental and extinction crisis (e.g. shifting from factory farms and monoculture agribusiness to ecofriendly small-scale farming, ending tropical and boreal deforestation, and increasing areas for biodiversity conservation); and the economic crisis (e.g. a Just Transition to safe, well paid ‘green’ jobs, cancellation of international debt in the global South, and outlawing tax havens). Ah well, I can dream.

It may seem odd for me to feature an article already published in P&I but I am concerned that regulars may have been a little deterred from reading on by the title of Oliver Howes’s truly excellent article called ‘Tracing the carbon loophole and other trade secrets that lead to unaccounted emissions’. Howes summarises a recent report, The Carbon Loophole in Climate Policy, that demonstrates that approximately a quarter of all CO2 emissions are associated with goods imported to countries. As a result of the international convention that governs the reporting of greenhouse gas emissions, these emissions are counted by the producing-country rather than by the country that actually consumes the goods, which would make a lot more sense. In essence, as the manufacturing industries of rich, developed countries have been transferred overseas, the associated emissions have been exported to poorer, developing countries. The rich countries maintain their high-consuming lifestyles by importing the finished products but without taking responsibility for the emissions associated with their production. That said, the analysis also shows that trade between countries outside Europe and North America (South-South trade) is increasing.

The ‘carbon loophole’ study uses an incredible database called Eora, compiled by a team of academics in Sydney led by Manfred Lenzen and Thomas Wiedmann, that tracks the global production and movement of goods from extraction of natural resources, through all the stages of production and transport to the final consumer. Hence Eora can be used to analyse not simply the world economy but also each country’s workforce conditions and ecological footprint based on their consumption patterns, regardless of where the products are produced.

Howes concludes: ‘as wealthy countries outsource production to poorer ones, greenhouse emissions and environmental impacts there increase, and social impacts on the poor, being less regulated, are worse. Natural capital declines; child labour has increased. At the other extreme, the world’s top 10% of income earners are responsible for between 25% and 43% of environmental impact. And Australia is at the very top of that 10%.’ Manfred Lenzen himself is clear about the need for a shift to consumption-based accounting of emissions: ‘Rich consumers like us are implicated in pollution and inequality all over the world, and people in poor countries bear the brunt. Many citizens of rich countries require the work of up to five poor people to satisfy their consumption … our new research clearly points to a need for so-called consumption-based accounting – where a country’s environmental score includes its imports – and leaves no room for loopholes.’

Part of solar’s success is attributable to the rapid fall in prices over the last decade. Over the last year, however, the price of solar panels has increased from 19 to 24 US cents/watt. As the graph below demonstrates, this is not unprecedented, prices have shot up at times during the last 10 years, but the recent increase has been persisted for a while now. It’s less dramatic but it could affect tight profit margins. What’s gone wrong? Nothing much apparently. The price rise is due to the increasing cost of some raw materials such as polysilicon, steel and aluminium and increased shipping costs. According to one analyst, this shouldn’t affect the projected 27% increase in solar installation globally this year. However, if you’re thinking of putting some panels on your roof and have noticed the local price go up, you might want to delay until next year when prices are predicted to start heading down again. 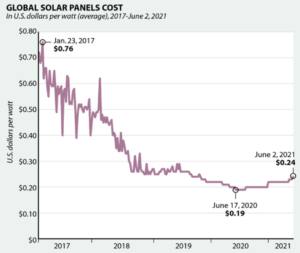 Perhaps a little surprisingly, it’s now clear that some trees emit methane (so called ‘treethane’!!) and Dr Luke Jeffrey at Southern Cross University is researching the mechanisms by which different trees produce and emit varying amounts of methane in different habitats, for instance tropical, wetland, upland and lowland forests. He’s trying to determine if, bearing in mind that there are three trillion trees in the world, this is a significant source of global warming. Even more surprisingly though, there’s a bacteria in the bark of paperbarks that consumes about a third of the methane that the tree produces and turns it into carbon dioxide. This is not exactly a climate-saving solution, of course, but it is important that we understand these processes for the welfare of ourselves, the climate and the trees – and, to be fair, the bacteria as well.

Multiple choice question time. How many birds are there in the world?

For a bonus point, which is the most numerous bird species in the world?

And to protect our diminishing birds, advice from Birdlife Australia for dog owners about dogs on beaches: 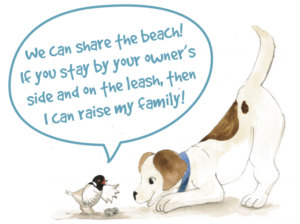