Sunday environmental round up, 11 October 2020

A look at current figures to see if China going carbon-free will destroy Australia’s coal industry. COVID is bad enough but some people have had COVID and extreme weather events to deal with. Governments have an opportunity to use the COVID recovery to clean up international trade’s supply chains and emissions. How to buy sustainable fish.

China’s commitment to achieve net zero carbon emissions by 2060 has serious implications for Australia as well as China. Mike Cannon-Brookes has predicted that Australia’s fossil fuel industry will collapse within 20 years as a result. The graphs below, all taken from a report by the Reserve Bank of Australia last year, provide some indications of the challenges ahead for both countries.

First, just so we are in no doubt about the overall picture: coal and gas are still responsible for generating just over 60% of the world’s electricity (total about 26,600 TWh) and the amount being generated by both is increasing. Solar and wind are also increasing but only at about the same rate as coal and gas, and together they still generate only about 12% of all electricity. 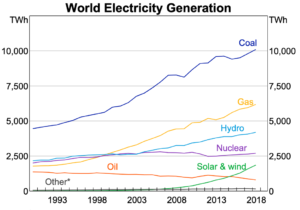 Second, global coal production peaked around 2013 but has remained high since then. China produces just under 50%. Five other nations, including Australia, are much smaller producers (5-10% each). 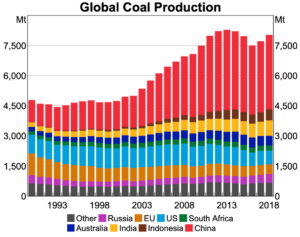 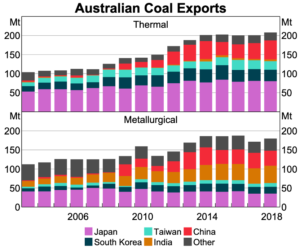 Fourth, Indonesia is the major exporter in the world’s large thermal coal market but Australia has a 20% share. Australia dominates the much smaller metallurgical coal export trade. 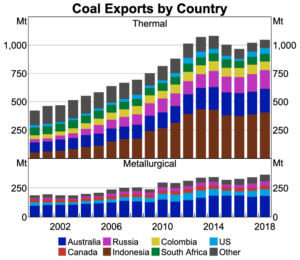 I’m not as smart as MC-B but it isn’t obvious to me that China’s plans on their own are going to destroy Australia’s coal business in the next 20 years. If anyone knows Mike, perhaps you could see if he’s interested in writing a piece for P&I explaining his thinking. Seriously!

A preliminary assessment of areas affected by COVID-19 that have also suffered climate-related disasters has revealed that:

The authors note that these figures are almost certainly severe underestimates and that they have not even considered later consequences such as increasing food insecurity, displacement and conflict. They conclude, ‘We cannot deal with the pandemic and its economic impacts in isolation from the climate crisis and wider development objectives such as poverty reduction. [W]e should consider how to not just recreate our old vulnerabilities, but invest in greener, more resilient and inclusive societies.’ Scotty and Josh clearly don’t agree.

International freight by land, sea and air is heavily dependent on fossil fuels and is responsible for over 7% of global emissions. The business is expected to triple by 2050 and it’s widely seen as one of the more difficult sectors of the economy to decarbonise. Meeting the Paris Agreement to keep global warming below 2oC will be difficult if international freight doesn’t come to the party but it’s escaped a lot of scrutiny until now because it is, well, international and often falls into the gaps between national commitments. There’s a strong argument that now is the ideal time for governments to start to engage with this problem. With many transport companies struggling during the pandemic, governments could attach strong environmental conditions to any bail-outs and loans – requirements to purchase more fuel-efficient planes and achieve emissions reduction targets, for example. Governments could also reduce global trade by encouraging more regional production of goods. This has the added advantage of reducing dependence on foreign supply chains. Another option for reducing imports and preventing countries without a carbon price free-loading on those that do is to put an emissions-based border tariff on imported items. This is already planned for Europe.

Talking of international trade, the supply chains of big multinationals such as Walmart, Apple and Coca-Cola are responsible for almost a fifth of global greenhouse gas emissions. Freight is one contributor. More significantly, however, in pursuit of cheap labour and loose regulations, multinationals have moved much of their production to developing countries, especially in Asia. Consequently, developed countries have reduced their emissions (with one or two notable exceptions!) by ‘exporting’ the dirty processes that produce the commodities that they still consume to developing countries. The Paris Agreement is entirely based on the emissions actually generated within a nation’s borders. It would more accurately reflect a country’s contribution to global warming if the emissions associated with each country’s consumption patterns were monitored and reduced.

Our Treasurer has been encouraging couples to breed for the economy but a survey in the USA in early September indicates that 11% of childless couples cite concern about climate change as a major reason for their decision; another 15% say it’s a minor reason. There was very little difference between women’s and men’s responses but non-white people, Gen Zs and Millennials, and non-Republicans were more likely to consider climate change in their decision to remain childless. It’s a bit perplexing that 16% of child-free Boomers gave climate change as a reason. 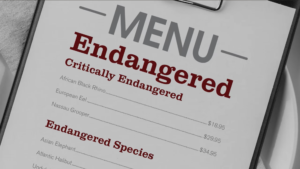 ‘You can’t just go and buy a rhino in the shops because everyone knows they’re endangered and there’s laws and regulations that protect these species. It’s the same for whales and dolphins and turtles and things that we care about.’ Carissa Klein

‘But for animals we don’t relate to. Things like fish, shrimps and squid, we can still hunt, buy and eat them even if the species has declined so much that the species is threatened with extinction.’ Leslie Roberson

To hear more from Carissa and Leslie from the University of Queensland about buying fish responsibly to protect endangered species, have a look at Jellyfish with your chips, a simple but effective 3-minute video. 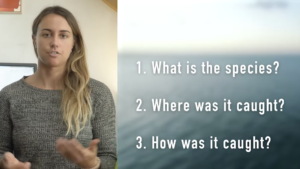