Sunday environmental round up, 13 December 2020

The Amazon rainforest and Pacific islands are increasingly threatened by climate change but rich nations prefer spending on their military forces rather than climate change. A little-known hero of threatened species protection receives a posthumous tribute but Jeff Bezos’s philanthropy is not so fortunate. Pardalotes feature in Indigenous culture.

This report from the BBC is quite a long read but it’s a very comprehensive and readable summary of the damage that’s being done to the Amazon rainforest. It also has some great photos and diagrams. Just to whet your appetite: 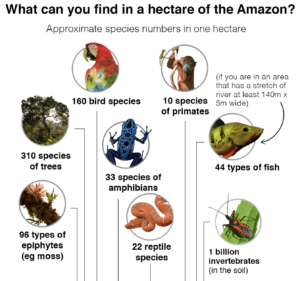 It’s easy for those who know no better (e.g., me) to think that the consequence of rising sea levels for low lying Pacific islands is that they will simply disappear under the waves. As well as describing the tremendous sense of loss of home, culture and heritage that has accompanied the flooding of coastal land and even whole islands, this piece by a young pharmacist in the Solomon Islands highlights the effects on ecosystems (mangroves, crustaceans, turtles, birds, fish), supplies of food and water, land rights and inhabitants’ daily lives: ‘… we wake up to face the negative impacts every single day. Let our experiences be told truthfully and loudly to those far and wide. The very real losses and damages from climate change must be recognised nationally and internationally, and policies put in place to make action, in every country, happen’.

While I’m confessing ignorance, I admit that I had never heard of Dame Georgina Mace until I read her Guardian obituary – shame on me. The apparently delightful, no-nonsense, very smart Dame was responsible in the 1990s for injecting data and scientific rigour into the previously ‘haphazard’ International Union for Conservation of Nature’s red list of threatened species. Mace’s work transformed the list from a compilation of charismatic favourite species (chimpanzees and leopards for instance) to something that could be used by governments and private companies to guide decisions and resource allocation. There are currently approximately one million species on the red list. Please read her very affectionate obituary and also the abstract of one of her last publications which displays a combination of hard-nosed reality and practical optimism. (Perhaps ‘bending the curve’ should be someone’s ‘word of the year’ for 2020.)

He’s Mr Amazon and he’s very rich, that’s about all I know about Jeff Bezos. I’m certainly not very rich but I assume it must be somewhat galling to give US$1 billion to environmental charities and have the Financial Times criticise you for not being innovative or radical enough; in essence, for not being Bill Gates or Michael Bloomberg. What a problem to be faced with though: where should I direct my philanthropic billions? Do new technologies deserve my support (Bill’s preference)? Political activism (Michael’s penchant)? Clean energy for developing countries? Building sea walls to prepare for the inevitable? I’ll let you know when I’ve decided where to direct my billions for maximum impact.

For the last five years, annual global investment in renewable energy has been relatively stable at around US$310 billion (in 2019 US$). In 2019 it was US$311 billion and it looks like being similar or a bit less in 2020.

In 2019, sales of arms and military services by just the 25 largest arms manufacturers and service providers totalled US$361 billion, an 8.5% increase over 2018. The top five companies are all based in the USA and achieved sales of US$166 billion. The twelve US companies in the top 25 accounted for 61% of the total sales. China has the second largest share of the pie; their four companies in the 25 accounted for 16% of sales. Australia doesn’t have a company in the top 25 but it is the country beyond the arms industry hubs in the USA and Europe that hosts the largest number of outposts (38) of large foreign arms companies. Making war, threatening to make war, and trying to look strong enough to resist aggression from others are clearly more important than the transition to renewable energy. In 2016, the G7 nations spent about 35 times more on the military than they did on international climate finance; on threatening the rest of the world rather than helping them tackle the climate crisis. And let’s not forget the political and financial importance of maintaining the mutually beneficial and very profitable relationship between the arms industry and government. Or the massive carbon ‘bootprint’ of armed forces, perhaps 5% of global emissions.

I was enthusing about pardalotes a couple of weeks ago and a reader has kindly brought to my attention that one of the entries for this year’s Wynne Prize at the Art Gallery of NSW is called Djuḏutjuḏumun djinawa guṉḏirrŋura (pardalotes nesting inside termite mound) by Mulkun Wirrpanda, an Aboriginal elder from Northeast Arnhemland. You can find out more about this particular artwork and termite mounds (and possibly, like me, discover a new word) at the Wynne Prize website and see more of Mulkun Wirrpanda’s work here and here. 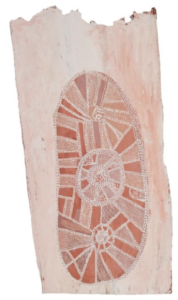