Greta Thunberg accuses world leaders of pretending to tackle climate change. Ecocide gets a legal definition – President Bolsonaro beware! Economic viability of gas power plants justified on false assumptions and lots of reasons why nuclear isn’t the answer either. Australia’s emissions per person not as praiseworthy as the government would have us believe.

Regular readers will have surmised already that I’m a bit of a Greta Thunberg groupie. Why wasn’t I as eloquent as her in my teens? Here she is at the recent Austrian World Summit accusing ‘you, the people in power, especially the leaders of high-income countries, of starting to act … not acting as in taking climate action but acting as in role playing. Playing politics. Playing with words and playing with our future. Pretending to wage war against fossil fuels while opening up brand new coal mines, oil fields and pipelines. [But] nature and physics are not distracted by your theatre’. There are many more gems in her allotted seven minutes.

The definition, formulated by an international panel of twelve jurists, has been released for comment and it is hoped that it will serve as the basis of consideration for an amendment to the remit of the International Criminal Court. It’s interesting to note that the panel’s report is dedicated to the contribution and memory of Australian jurist James Crawford who died recently.

The complex relationships between abuses of the rights of Indigenous peoples, criminal activities such as land theft, torture and murder, and the proposed new crime of ecocide are well illustrated in Bolsonaro’s Brazil. Bolsonaro’s defence of destruction of the Amazon is that he has a mandate from the people and that Brazil is a sovereign state that can do as it pleases within its own borders and has contributed very little to climate change anyway. Just the arguments any country might use to, say, justify its failure to take adequate action on climate change or avoid its obligations to international refugees and asylum seekers.

The Australian government is providing $600 million dollars to Snowy Hydro to build a new gas peaker or dispatchable gas power plant at Kurri Kurri in the NSW Hunter Valley. The government’s logic is that this is needed to maintain the reliability of the electricity grid after the Liddell coal-fired power station closes in 2023. The investment has been criticised as unnecessary. The Kurri Kurri plant is predicted to operate for only 2.5% of the year and there will be sufficient electricity supply to manage demand without it. The Institute for Energy Economics and Financial Analysis (IEEFA) has now also shown that the government’s financial modelling is based on a false assumption: specifically, that the new plant will maintain a constant capacity factor over its lifetime. History tells us that this is not the case. The two graphs below demonstrate that the average capacity factor of all the gas-fired power plants in Australia’s (eastern states) National Electricity Market fell from 27% in 2010 to 16% in 2020, and that the capacity factor of only the gas peaker plants fell from 12% to 7%. 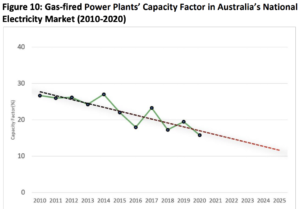 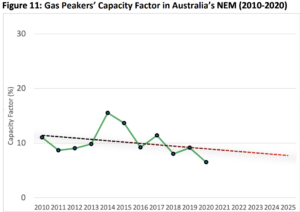 On the basis of this evidence, IEEFA advises potential investors in future gas power plants to beware of cost projections based on the commonly used but false assumption that gas power plants maintain a constant capacity factor throughout their operating life. Just like coal-fired power plants, they don’t, and so their operating costs increase. And just like their coal cousins, they will rapidly become stranded assets, pushed aside by cheaper wind, solar and batteries.

Ten reasons why nuclear power is not a solution for climate change:

Plus, eleven, nuclear power is a centralised power source that requires lots of up-front capital and a large distribution grid, and, depending on location, private ownership. Wind and solar provide lots of opportunities for local councils and communities to build facilities that are tailored to local needs, independent from the grid and community controlled.

The Morrison government repeatedly presents Australia’s (modest) reductions in CO2 emissions per person as evidence of their strong action on climate change. However, as a measure of achievement in reducing global warming, emissions per person is complete rubbish. Total emissions, not emissions per person, is all that matters. The government also loves to play the ‘look over there’ trick to justify not taking more action: ‘What about China? They produce far more emissions that we do’. Duh! – their population is 56 times larger.

But the emissions per person metric does have some uses – it demonstrates where moral responsibility lies and it highlights deception and obfuscation about action. The graph below illustrates these points in spades. Not only are Australia’s and the USA’s emissions per person at least twice as high as China’s but also note that all three countries’ levels remained remarkably constant between 2014 and 2019. If anything, Australia’s have increased marginally. 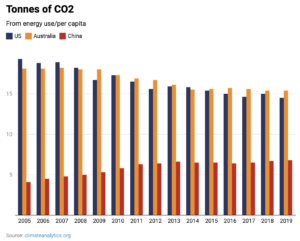