Sunday environmental round up, 14 February 2021

Burning coal and oil releases many ‘traditional’ health-damaging pollutants into the atmosphere as well as carbon dioxide. Some are heavy metals (e.g. lead and mercury), some are gaseous (e.g. oxides of nitrogen and sulphur), and some come in the form of small particles of soot, smoke and various chemicals. This particulate matter (PM) is known to be harmful to health (particularly the respiratory and cardiovascular systems) and to be a significant cause of premature mortality. New data has upped the ante considerably on the health damage caused by PM2.5, particles smaller than 2.5 microns in diameter – about 1/30th the thickness of a human hair. The study shows that in 2018 about 8.7 million premature deaths were caused globally by the PM2.5 released from burning coal and oil. This is double the previous estimate and represents more than one in seven of all deaths in 2018. The vast majority of the deaths occurred in China and India but parts of the USA, eastern Europe and Southeast Asia also had large numbers. The associated global economic and health costs were almost US$3 trillion. (Note that the linked Guardian article refers to ‘deaths’ but the original research article clearly focuses on ‘premature mortality’.)

In terms of energy production, in 2018 Australian coal made up 3.7% of the coal and oil produced globally (we produce very little oil). 3.7% of 8.7 million is 321,765. So, coal mined in Australia causes more than 320,000 premature deaths globally every year. And that’s only from PM2.5, there are lots of other nasties produced when coal is burnt that weren’t considered in this study.

Australia’s coal industry has about 52,000 employees, which means that Australian coal kills about six times more people every year than are employed in its production.

What about the mine Adani is currently building in Queensland’s Galilee Basin? It’s difficult to know Adani’s real production plans but they probably hope the mine will produce 55 million tonnes of coal per year when fully operational. That much Adani coal will cause almost 37,000 premature deaths per year globally. Once the Adani mine is up and running, Gina Reinhart and Clive Palmer and others will  advance their plans for the area and the Basin could be producing about 300 million tonnes of coal per year … and 200,000 premature deaths. We don’t hear the political, mining and financial industry champions of coal mines and coal fired power stations quoting these sorts of figures when they trumpet their usual claptrap.

The fossil fuel industry as a whole and several Australian governments like to talk up the importance of the industry for employment and the job losses that will occur if the industry dies. But a few figures from a recent Australia Institute report paint a different story:

None of these figures diminishes the significance of the loss of one’s job to an individual and their family or the loss of an industry to a local community. But they do clearly indicate that the demise of Australia’s fossil fuel industry will not create a massive hole in Australians’ employment prospects. And the report clearly establishes that if there is an orderly planned transition, individuals and communities need not suffer. Au contraire, individuals and communities will undoubtedly suffer in the absence of an orderly planned transition.

The report’s nine principles for effective transition planning include: commit to the staged phase-out of fossil fuels in line with reaching net zero emissions by 2050 (I’d say 2040 or earlier); reduce involuntary redundancies by facilitating intra-industry mobility and voluntary retirement; support reskilling, relocation and income protection for affected workers; and support the development of other regional industries, e.g. health, social services, education, renewables, agriculture, manufacturing and the remediation of mine sites and related infrastructure. I’ll leave the final word, a message to Joel Fitzgibbon almost, to Jim Stanford, the report’s author: ‘Far from being ‘supportive’ of fossil fuel workers by attempting to disrupt and delay appropriate climate transitions, in fact it does them a great disservice to pretend that these industries have a long-term viable future. It seems a cruel hoax to encourage young workers to begin their careers in industries with an inevitably short time horizon.’

Generally speaking, I’m not one for hero worship, not of living people anyway. But Greta Thunberg continues to challenge my reluctance to grant anyone special status. Her five minute address to the recent World Economic Forum meeting (online rather than at Davos this year) is well worth watching. Her knowledge and insight; her presentation of truth to power; her calm eloquence – she is a remarkable young woman. It cannot be long before she wins the Nobel Peace Prize.

Steven Donziger, a human rights lawyer, has been in home detention in New York for the past 17 months awaiting trial for contempt of court. No one in the USA has ever previously been held pre-trial for one day for a ‘federal misdemeanour’ and even if he were to be convicted the maximum penalty for the offence is six months detention. Why, you might be wondering, am I covering this story in my environmental round up. It’s a long and complicated story that goes back to Chevron being found guilty in Ecuador in 2011 of deliberately dumping, over several years, 16 billion gallons of toxic oil waste onto lands in the Amazon. Chevron was fined US$9.5 million, which they have been strenuously resisting paying ever since. Donziger played a leading role in the legal team that represented the Indigenous clients who won the case. But what’s that got to do with him being accused of contempt of court in the USA? Again, it’s complex but, apparently in retaliation, Chevron filed a ‘racketeering’ case against Donziger in New York and a judge with links to Chevron ordered Donziger to hand over his computer and mobile phone to Chevron. Donziger appealed, the judge hit him with contempt of court, confined to home detention until the case is heard (which still hasn’t happened because of COVID) and has refused to release him. There’s more to it than that but I’m sure you get the picture. This article provides more details and there’s also a 12-minute video of what went on in Ecuador.

If you have been putting off buying an electric vehicle (EV) until the prices are comparable to the petrol-driven variety, your wait may soon be over. A battery that would have cost over US$1,100/kWh in 2010 is now US$137/kWh. The long-awaited price of US$100/kWh that will allow car manufacturers to sell new EVs at the same price as petrol-driven ones looks like being met in about three years. Predictions are that by 2030 the battery price will be about US$60/kWh. Increasing demand leading to economies of scale, new battery pack designs and improved battery technology (with more battery chemistry and design improvements on the way) are all contributing to the falling price of EV manufacture.

Interestingly, Norway is the world leader in market share of EVs sold. Pop stars, media stunts, tax and road toll exemptions and a publicly financed program to build accessible charging stations have increased the attractiveness and reduced the cost of EVs in Norway and in 2019 56% of all new vehicles sold were EVs or plug-in hybrids. The goal is for 100% of new sales to be EVs by 2025. If, like me, you’re not an American football fan and missed GM’s EV ad featuring Will Ferrell, please watch it now, and also Audi’s Norwegian response that stars an actor from Game of Thrones (whatever that is).

Sawfish are now extinct in 55 of 90 countries in which they were once found, covering approximately 60% of their former distribution. They tend to live in shallow murky waters and habitat loss, accidental bycatch and entanglement in fishing gear are the main problems. Eight nations – Cuba, Tanzania, Colombia, Madagascar, Panama, Brazil, Mexico and Sri Lanka – have been identified where sawfish species are threatened but urgent action focused on reducing fishing pressure and protecting mangroves could deliver good results. None of them is bursting with riches though and wealthier nations will need to provide financial and expert assistance. Australia and the USA are seen as ‘lifeboat nations’ where sawfish are better protected. 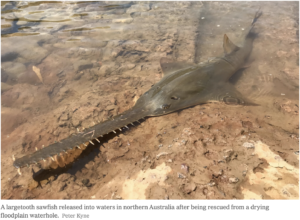