Plants and growth: where to plant 60 billion trees in the USA; climate change destroying kelp forests; burning biomass destroys native forests and fuels climate change; and forbs disappearing from Victoria’s basalt plains. Plus degrowth, of the economy rather than vegetation.

In view of the many benefits trees provide, they should be viewed not simply as an optional ‘decoration’ of the urban and rural landscape but as essential infrastructure just like public transport, electricity grids, clean water, efficient sewage systems, roads, etc.

The simple graphic above illustrates where the USA could plant up to 60 billion trees by 2040. These trees could remove 540 million tons of CO2 per year, about 10% of the USA’s annual emissions. The largest opportunities are by reforesting historically forested land (21 billion trees), increasing the stocking of ‘understocked’ forests used for timber production (24 billion) and integrating trees into pastures (13 billion). Smaller increases can be achieved by planting trees on croplands, for instance between rows, around field edges and along streams (2 billion) and in cities (400 million). As well as carbon sequestration, there are many additional benefits of increasing the tree cover: for instance, improving soil fertility, reducing heat stress on livestock, reducing the ‘urban heat island’ effect, cleaning the air in cities, and improving living environments. Landforms, climates and farming practices are very different in the USA than in Australia but it would be interesting to see where trees could be planted and in what sorts of numbers here.

Kelp forests provide sanctuary for marine animals big and small, protect coastlines by breaking up wave action, oxygenate the water and can store up to twenty times as much carbon as a similar area of land forest. Kelp is, however, very sensitive to temperature and the kelp forests along the coast of California were badly affected by prolonged marine warming during 2014-16. The situation was made worse by the warm water also killing millions of starfish that eat sea urchins that feed on the kelp. The urchins then proliferated and ate out the remaining kelp and the growing new kelp stalks and the forest was decimated. The urchins then entered a dormant state which they can maintain for years but during which they are of no commercial value. In some areas the devastation was not quite so bad and this seems to be due to the presence of sea otters that eat urchins and keep the population under control. It’s the kelp spores from the otter-protected areas that will, with any luck, drift to the devastated areas and start the recovery of the kelp forests and starfish. This problem is not limited to California. It’s occurring global and destruction of kelp forests by marine heat waves has also occurred in Australia.

There’s no easy fix to this problem but responses are available: immediate action to limit global warming; protect kelp forests by limiting other stressors such as agricultural run-off and other pollution in coastal areas; create marine protected areas; re-establish damaged ecosystems with habitat rehabilitation and transplantation of kelp; and researchers’ perennial favourite: more research.

If anyone retained any doubt whatsoever before COVID, the one thing we have learnt for certain from the last 16 months is that economic growth is king monarch regionally, nationally and globally. Without economic growth, so we are told, social conditions cannot continue to improve, wages and living standards will stagnate or deteriorate, the developing world cannot develop, and intra- and inter-national equity cannot be tackled. If you want to be considered a fool, suggest the need for a ‘steady state economy’ or, even worse, ‘degrowth’ of the economy. Economic growth is considered so fundamental in the corridors of national and international power that the Intergovernmental Panel on Climate Change (IPCC), the body responsible for providing ‘policymakers with regular scientific assessments on climate change, its implications and potential future risks, as well as to put forward adaptation and mitigation options’, has based its projections on three givens: unprecedented technological change to reduce emissions, unproven negative emissions technologies, and continuing growth in nations’ gross domestic products (GDP). Despite the association of massive economic growth with increasing greenhouse gas emissions and climate change over the last 200 years, steady-state and degrowth scenarios never get a mention in the IPCC’s considerations.

Perhaps realising that degrowth was unlikely to be on the IPCC’s agenda in the near future, Keyßer and Lenzen (remember the carbon loophole study a couple of weeks ago) have examined 18 degrowth scenarios to keep warming under 1.5oC. The scenarios involved various combinations of degrowth (all less than that experienced in 2020), renewable energy use and social change. Only simple carbon removal techniques, such as trees, were used. Compared with the IPCC’s scenarios, degrowth scenarios were found to ‘minimise many key risks for feasibility and sustainability compared to technology-driven pathways, such as reliance on high energy-GDP decoupling, large-scale carbon dioxide removal and large-scale and high-speed renewable energy transformation.’  But also that ‘substantial challenges remain regarding political feasibility’ – that’s an understatement if ever there was one – as degrowth would ‘require radical social change’. It’s important to note that degrowth is not seen as a return to some Neolithic or even 18th century-like existence. Rather, degrowth could be accompanied by not only reduced environmental impact but also maintained or even increased social welfare and quality of life and greater economic fairness and equity among countries. This is, of course, far from the last word on this topic but the findings do suggest that degrowth pathways should receive more consideration by the bodies responsible for tackling climate change.

There’s a simple common-sense appeal about burning the organic waste that emerges from the agricultural and forestry industries to produce energy rather than sending it to landfill to rot away. Not so appealing is chopping down trees to produce wood pellets to burn in power plants to produce electricity.

In 2009 the European Union (EU) committed to reducing greenhouse gas emissions and declared biomass (any burnable organic matter in essence) to be a carbon neutral renewable energy source. One local outcome was that the EU member states encouraged energy producers to burn biomass instead of coal and the demand for wood increased. One distant outcome was that the American southeast, particularly North Carolina (see also this 6-minute video), became Europe’s primary source of biomass for burning. In the USA the wood pellet industry has split communities. It provides jobs for a few but not prosperity for the towns and regions. It also creates health problems from noise and air pollution, particularly in the poor Black communities near which the pelleting-making factories are nearly all located.

Then there’s the problems associated with burning biomass at all. First, there’s debate about whether burning trees is carbon neutral – possibly it is over a hundred years or more but not in the short term, which is where our current problems lie. Complicating the emissions problem even further, in 1996 the UNFCCC decided that the greenhouse gas emissions associated with wood pellets should be counted where the pellets are produced, not where they are burnt. Also, chopping down native forests destroys ecosystems and biodiversity, which are not restored in the monoculture pine plantations that replace the forests. To cap it all, burning wood is not very energy-efficient and produces lots of health damaging air pollution, especially dust and small particulate matter. This all reads like a classic example of politicians acting like they are taking climate action rather than taking real climate action, as identified by Greta Thunberg recently.

‘We all experience the syndrome where we unconsciously lower our expectations to normalise what we might otherwise experience as a constant stream of losses.’ So begins an elegiac editorial in a recent edition of the journal Ecological Management and Restoration that focuses on ‘shifting baseline syndrome’ – the neglect of something we think of as common or not special leading to its gradual unnoticed disappearance. For example, the grasslands of the Victorian basalt plains west of Melbourne were once common but are now reduced to 0.15% of their previous range, with the loss of eleven grassland forbs (a type of flowering plant – I had to google it – see photos below). Unfortunately, this has been the fate of hundreds of previously common but now endangered ecosystems in Australia and globally. More optimistically, the writer relates recently encountering a healthy, diverse grassland ecosystem on a road verge and describes efforts to restore several threatened ecosystems and species, including forbs, shellfish, freshwater fishes and tree-kangaroos. The hope is that increasing people’s exposure to these ecosystems and species will shift the baselines in positive directions and encourage us to care more in future if threats re-emerge. 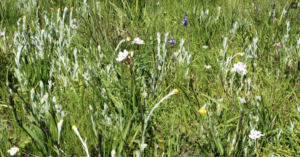 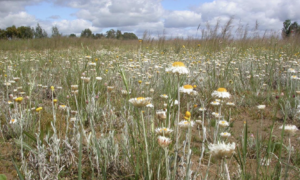 Of course, Joni Mitchell told us all about shifting baseline syndrome 50 years ago:

Till it’s gone
They paved paradise

And put up a parking lot.