Sunday environmental round up, 15 November 2020

Sustainable development can be defined as securing everyone’s wellbeing within what the Earth’s ecosystems are able to supply and replenish every year. The figure below plots each nation’s ecological footprint (the number of Earths that are required to provide the resources necessary to maintain the country’s current lifestyle) against its score on the Human Development Index (a measure ranging from 0-1 that combines average scores for health, education and standard of living, with 0.7 considered the minimum desired level). Ideally, all nations would be in the bottom right hand rectangle of the figure: an environmentally sustainable high level of human development. Unfortunately, almost all nations suffer low human development and/or exist by virtue of being environmentally unsustainable. I’ve marked Australia with the red star. 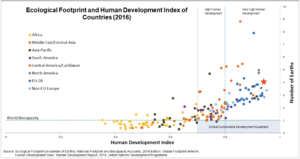 As we all now know, COVID-19 is an unwanted but not an unusual or unforeseeable development. On average two new viruses spill over from their normal animal hosts to humans every year. What can be done to prevent spill-overs and is the cost worth it? ‘Plenty’ and ‘yes’ say the authors of a paper in Science. First, reduce deforestation. Forest edges are a major site of spill-over and they increase greatly as deforestation occurs, particularly as it often happens in a chequer-board pattern. International contributions of about US$1 billion to the Amazon Fund greatly assisted Brazil to decrease deforestation by 70% between 2005 and 2012. Second, reduce the legal and illegal trade in live and dead wildlife for food, ‘medicines’ and ‘pets’, and educate indigenous and remote communities that depend on hunting for food about safe handling. Third, improve systems for the early detection, reporting and control of zoonotic diseases. Fourth, improve biosecurity on farms to limit the wildlife-domestic animal-human interfaces and transmission. The authors estimate the costs of these preventive measures at US$20-30 billion per year, the major element being ending the wild meat trade in China, followed by reducing deforestation. But reduced carbon emissions would save about US$4 billion per year. The early detection and control strategies look like a particularly good investment at just US$200-300 million per year. The authors also estimate that COVID-19 will result in a reduction of global GDP by at least US$5 trillion and that 0.5-1 million lives will be lost. Funding the prevention measures for 10 years will cost about 2% of the costs of the COVID pandemic.

In its latest World Economic Outlook, the International Monetary Fund (IMF) has challenged the standard scare-tactic that cutting greenhouse gas emissions inevitably means sacrificing economic growth by arguing that there doesn’t need to be a trade-off between the two. Not only that, cutting emissions delivers valuable co-benefits such as fewer deaths from air pollution and reduced traffic. The IMF claims that the world could get to net zero carbon by 2050 with a package of measures including a carbon price starting at US$6-10 per ton (that seems to be about a tenth of what others have said will be necessary), 80% subsidies for renewable energy, compensation for households, and public investment in green initiatives funded by borrowing at currently low interest rates. Such a package would produce little change to GDP until mid-century and financial gains after that. If the IMF’s championing of climate action all sounds too good to be true, critics of the Fund have pointed out that their actions in developing countries such as Indonesia, India, South Africa, the Philippines and Mozambique have downplayed the risks associated with climate change and recommended policies which would lock in dependence on fossil fuels for decades.

We see media stories about disasters in faraway places when they happen (sometimes). But we seldom hear much about how the lives of ordinary people are affected. These 2-minute videos present stories of destruction and survival in Mozambique after cyclones Idai and Kenneth in 2019 and in the Philippines from recurrent floods. Particularly striking is the impact of disasters on women. This confirms reports that women are often the worst affected when disasters hit, for instance shouldering most of the coping tasks, suffering increased violence and taking significant roles in organising local recovery efforts. Yet they are often ignored in decision making. The full CARE report can be found here.

Skinks are lizards and as such have limbs, unlike snakes. But about 60 million years ago some skinks lost their limbs and began to resemble snakes. But then about 20 million years ago some limbless lizards regrew their limbs. The loss and regrowth may be related to the influence of climate change on soil texture and the speed with which the skinks have to run and burrow. Apparently it’s very rare for a species to regain a complicated structure that they have lost through evolution. The picture below is of the wonderfully named Brachymeles boulengeri from the Philippines (named after George Boulenger, not a spelling-challenged French baker). 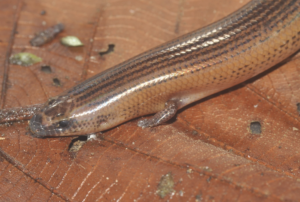