Sunday environmental round up, 16 August 2020

CO2, CO2, and CO2: an oil pipeline in the USA reopens, coal mines and CSG wells in NSW look for approval, Feds give green light to more emissions, gas flaring increases, while Texas ‘mothballs’ its carbon capture and storage poster-child and blows the other states away with wind energy. French scientists use AI recognise individual Zebra Finches.

A couple of week ago I reported that a US judge had ordered that the 2000km Dakota Access Oil Pipeline from North Dakota to Illinois temporarily cease operations while an additional environmental impact statement was prepared. In a split decision, three judges on the Court of Appeals have reversed the shutdown order but not the requirement for another impact statement. There is a long history of opposition to the pipeline from environmentalists and Native Americans. Obama stopped the completion of the pipeline but Trump approved it, and the recent court decisions reinforce its on-again, off-again history. While the pipeline’s opponents stress the importance of the environment and indigenous rights, the operators emphasise the economic benefits: ‘… the Dakota Access Pipeline […] has been operating for over three years and provides millions of tax dollars to states, affordable energy to the entire region, and thousands of jobs along its route’ and ‘problems with our outdated permitting system, which allows protracted challenges to advance within the courts and ultimately take away jobs, tax dollars, and investments that pipelines bring to communities that sorely need them.’ Sound familiar?

It certainly will to residents around Narrabri in northern NSW. The NSW Independent Planning Commission this week approved an extension of the nearby Vickery coal mine owned by Whitehaven Coal. The IPC obviously considers that the mine’s contribution to global warming is less important than the jobs Whitehaven claims it will provide for the next 30 years. Good to know Whitehaven and the NSW government are thinking such long term on jobs and short term on the future! The Commission imposed 184 conditions on Santos (whose respect for the law is not great) and it will be interesting to see how well they are monitored.

The IPC’s fossil fuel work around Narrabri is not done yet, however. It is still considering an application by Santos to sink 850 coal seam gas wells in the Pilliga State Forest and on farmland. On August 9th the ABC’s Landline featured this proposal (from 24-39 minutes). The Santos CEO’s Dakota-like justifications around the 29 and 38 minute marks are worth a listen.

Carbon emissions … naargh, who cares? Certainly not the national government. The sham of their ‘safeguard mechanism’ has been vividly demonstrated by the approval given to a raft of large companies, including BHP and Anglo American, to increase their annual emissions by a combined 1.6 million tonnes. And then there’s the approval given to new players to start emitting CO2. ‘But they’ve increased their emissions per unit of production’ boasts the government. Tell that to the laws of physics – they are interested only in the amount, not the efficiency.

We’ve all seen dramatic pictures of gas flaring, the burning of the natural gas that comes to the surface during oil extraction. Despite the gas being a valuable potential resource (but not for much longer, I hope), flaring occurs because of lax regulation and because it costs companies money to capture it, a situation worsened by the currently low gas price outside Australia. According to the World Bank, flaring releases more than 400 million tons of CO2-equivalent greenhouse gases into the atmosphere every year – more than the UK’s annual emissions. Russia, Iraq, the USA and Iran are responsible for almost half of all flaring. The amount of gas burnt globally decreased by about 20% during the noughties but since 2010 it has been increasing again. The World Bank’s Global Gas Flaring Reduction Partnership is working with governments and the oil industry to develop policies, regulations and practices to end routine gas flaring by 2030. If demand for natural gas falls (as it must to keep climate change under some control) but oil continues to be used for longer, it will become even more difficult to persuade companies to stop flaring unless it is made illegal and/or a hefty tax is put on it. Past records of company profiteering and government (to be generous) timidity don’t bode well for chances of ending this ridiculous practice that serves no useful purpose but destroys the environment.

A couple of weeks ago I wrote an article about carbon capture and storage (CCS) that focused on capturing CO2 from the atmosphere rather than where it is generated, i.e. where fossil fuels, primarily coal, are burnt. While the coal industry and some governments have been keen to talk up the potential of CCS to produce ‘clean coal’ (a concept akin to dry water), the reality is that coal-fired power stations have struggled to make CCS work. It’s been remarkably unsuccessful at capturing the CO2 from the stations’ exhaust stacks and it hasn’t been economical, and won’t be unless a high price is put on carbon. In a further setback for the coal and CCS spruikers, their poster-child CCS plant in Texas has been shut down (sorry, ‘mothballed’) after only three years, despite having received considerable financial assistance from the US government and favourable bank loans. What is known about the plant’s technical and economic performance suggests that neither has lived up to the promises made to investors. As an aside, the plant was actually a CCU (carbon capture and use) project rather than CCS as the captured CO2 was used to improve production in local oil wells, but as it turned out not as much as expected. And to make matters worse, the CCU plant was operated by a gas-fired turbine that over the three years that the plant was operating produced almost a quarter as much CO2 as the plant captured. Potential CCU/S investors beware!

While we’re in the Lone Star state let’s not forget oil, big hats, LBJ, Dallas (program and assassination) … and, surprise, surprise, wind energy. Texas produces 27% of all of the USA’s wind energy – nearly three times more than its nearest rival Iowa – and it’s increasing rapidly at the expense of coal and gas generated electricity. Why? It’s in the windy corridor of the Midwest and Great Plains; the landowners like the rent; corporates are buying it (e.g. Facebook and Google and now increasingly non-tech companies such as Walmart and Kimberley-Clark); investors can see the future; and strong bipartisan political support. Oh, I nearly forgot to mention, Scotty … jobs and economic growth too.

Do you think you could tell the Zebra Finch below from his father or brother? … twenty metres away through undergrowth amongst thirty other Zebra Finches!  No, me neither. But French researchers have used artificial intelligence (AI) to train computers to consistently recognise individual birds with about 90% accuracy. This provides ‘the means of overcoming one of the greatest limitations in the study of wild birds – reliably recognising individuals’. AI has been used to recognise larger mammals before but not smaller creatures in the wild. The use of cameras and AI can save expensive fieldwork and spares animals from capture and marking. It also allows for much longer studies of animal behaviour – long enough to cover this pretty fellow’s entire 3-5 year life. 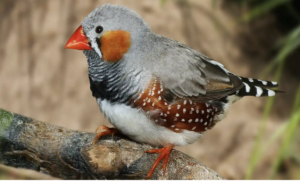