Unlike Australia, the USA is actively supporting a just transition for communities hard-hit by the demise of fossil fuels. The science and politics of solar radiation management. An Australian environmental philanthropist’s tips for doing the unexpected, and coastlines as essential infrastructure.

It doesn’t take much intelligence or insight to see that 1) the transition from fossil fuels to renewable energy is inevitable, happening now and happening more quickly than was widely expected just a few years ago, and 2) the longer the inevitable transition is ignored, the more painful will be the consequences for individuals, families, communities and regions. However, with good planning, individuals and communities can be supported through the transition, new opportunities can be developed and economies can be diversified. The Morrison government, focused solely on avoiding any transition of government rather than helping threatened communities manage a major social and economic transition, is taking a head in the sand approach to this problem. Not so President Biden.

Within days of taking office Biden established the Interagency Working Group on Coal and Power Plant Communities and Economic Revitalization. The Working Group, that includes twelve Federal government agencies, is required ‘to support and revitalize the economies of coal and power plant communities’ – that is, to put the concept of just transition into action across the USA. At the time, Biden said, ‘We’re never going to forget the men and women who dug the coal and built the nation. We’re going to do right by them and make sure they have opportunities to keep building the nation in their own communities and getting paid well for it.’ A clear recognition of the contribution that coal and the people who have mined it and turned it into energy have made to the USA’s development; of the inevitable change that is occurring in energy sources; and of the government’s commitment not to let the affected communities suffer.

Demonstrating admirable urgency, the Working Group issued its first report in April, identifying six regions with high numbers of fossil energy jobs and activities (see map below) and 25 specific Energy Communities that would suffer the most declines resulting from the anticipated transition from coal to clean energy and that require immediate assistance. The report’s recommendations include: 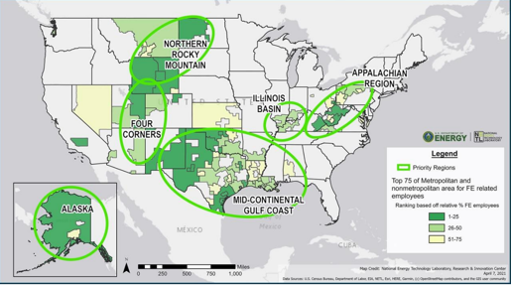 This extremely informative webinar on solar radiation management (SRM, one of several proposed climate geoengineering technologies) features luminaries such as Michael Mann, Bill McKibben, Naomi Klein and Greta Thunberg and representatives of Indigenous populations in Sweden and North America. Unfortunately, it’s two-and-a-half-hours long but if you are principally interested in the science, the first half is well worth the effort. Also excellent, however, is the second half that focuses on the problems and politics associated with SRM. Several points caught my attention:

In its heyday, Gunns’s Triabunna Wood Chip Mill on Tasmania’s east coast processed 100,000 clear felled trees every year … but still needed government support to keep it going. In 2010 Gunns decided to pull the plug and was looking for a buyer for their working mill. But, surprise, surprise, in stepped philanthropists Graeme Wood and Jan Cameron, who bought it, turned it into the Spring Bay Mill event destination and started regenerating the severely damaged local ecosystems. Graeme’s strategic lessons for budding interventionists include: get involved in real campaigning, not just digital signatures to online campaigns; remember environmental vandals are generally stubborn conservatives who are easily outflanked by creative campaigners; and search for left-field ideas that can bring the victory forward.

A couple of weeks ago I made the point that trees should be regarded as critical infrastructure similar to transport, water, sewage and power systems. This week, Jessica Grannis, Vice President of Coastal Conservation at the USA’s National Audubon Society, calls for the diverse ecosystems of coastal landscapes also to be regarded as essential natural infrastructure. Beaches, salt marshes, calm bays, wooded swamps, sandy barrier islands, oyster reefs, mangroves, kelp forests, etc.  provide, for instance, first lines of defence against rising seas and storm damage, habitat for threatened species (particularly birds), nurseries for sea-life, and physical and psychological nourishment for humans. Salt marshes can reduce wave heights by 70% and every mile of wetland can reduce storm surges by up to two feet (60cm for any younger readers). A dollar invested in flood reduction can deliver $7 of benefits. I realise that this is a very anthropocentric way of looking at nature but provided that preservation and restoration projects are conducted in ecologically appropriate ways I don’t see that as a problem. 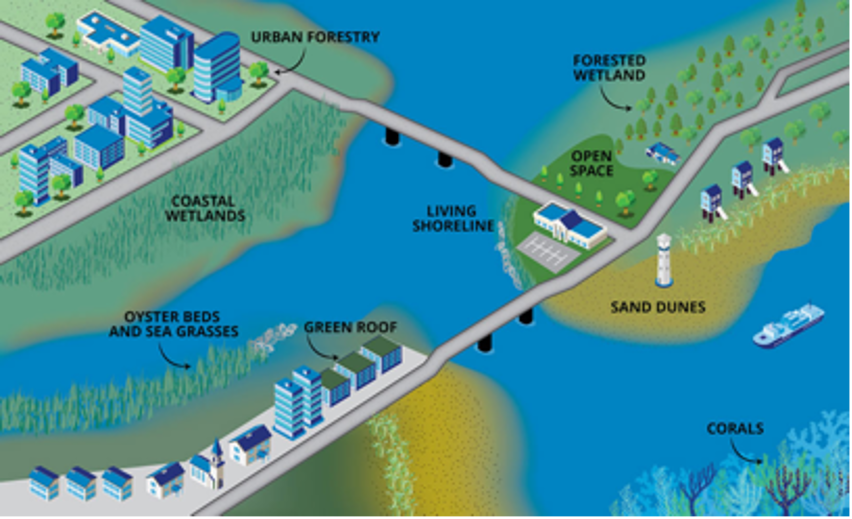