Sunday environmental round up, 18 October 2020

Plastics: littering the ocean floor, not being recycled, not easily replaced, may or may not provide oil and gas producers with a prosperous future. Populations of vertebrates have declined by 68% in 50 years.

By sampling the depths of the Great Australian Bight, 300 kilometres off the coast, the CSIRO estimates that about 14 million tons of microplastics litter the world’s ocean floors. Remarkably, this is apparently equivalent to about 60 shopping bags full of small plastic fragments on every metre of coastline in the world, and is much more plastic than is floating on the surface. Microplastics are fragments smaller than 5mm produced by weathering, waves and abrasion. Because they are so small, they are easily consumed by animals and can be harmful to health.

In the last 70 years the world has produced 8.3 billion tons of plastic; currently we generate about 350 million tons per year. The vast majority of plastics are produced from oil and gas and the industry currently makes about US$400 billion per year from plastics. Recycling seems like a good idea: almost all old plastic can be recycled into new plastic; the oil and plastics industries (and the public) strongly support plastic recycling; and about two-thirds of countries have some regulations limiting the use of plastics. So, what’s the problem? The problem is that it’s more expensive to recycle plastic, because the hundreds of different sorts have to be separated before reprocessing, than it is to produce new plastic from oil and gas. Plus, plastic degrades when recycled so it can be recycled only once or twice anyway.

This situation hasn’t changed much in decades and despite all the encouragement less than 10% of the plastic produced has ever been recycled. The rest has ended up in landfill or the oceans. The industry has been well aware of all this for decades and that’s why they have spent millions actively promoting recycling, including encouraging governments to mandate the use of recycling schemes, and promoting that enigmatic and often unreadable triangular symbol with the number in the middle. Basically,  the industry cynically  supports recycling so that the public is happy to keep buying and using plastic in the mistaken belief that it is mostly recycled. But there’s only one way to avoid plastics filling the land and oceans: producers must stop producing it and consumers must find alternatives (in whichever order).

As the world slowly but surely converts to renewable energy, the oil and gas industry is desperate to find alternative uses for its climate-destroying products.  And it thinks it’s found one. In fact, the industry is so sure that recycling old plastic is unlikely to happen on a grand scale and that government bans and/or consumer boycotts are unlikely to dent production of new plastics that it is confident it has a secure future. It just needs to find answers to some pesky problems. Hey presto, here’s one: let’s use US-Kenya trade negotiations to pressure Kenya to reverse its strict limits on plastic bag use, become a hub for supplying US-made plastics to the rest of Africa and take more of the rich world’s plastic waste. Magic!

If recycling doesn’t work, let’s replace plastics with similarly performing ‘non-plastics’, the ones made from vegetable matter rather than oil and gas. Unfortunately, that’s a bit more complicated than it appears. Corn-based plastic can be used to produce bottles, cutlery, films and bags. It is compostable but there’s a catch: only in high temperature industrial facilities, not your garden. Paper is recyclable and can be used to make bottles, cups, plates etc., but it often has a non-biodegradable plastic or foil lining. Bagasse, a fibre produced from sugar cane, is used to make food bowls and it is compostable in your back garden, provided you’re eating at home. Restaurants must have a separate bin and composting service for it to work. And then there’s plastic produced by bacteria. This breaks down in conventional land fill sites and even in the ocean. It’s not cheap though. On top of all that, apparently recyclers reject all items that are contaminated with food.

ExxonMobil used to be the world’s most valuable company. In 2007 it had a stock market value of more than US$500 billion, and between 2011 and 2015 it was US$400 billion. NextEra Energy is the world’s largest solar and wind power generator, although it also generates electricity from fossil fuels. In 2011 NextEra’s stock market value was about US$25 billion. The two companies now have almost identical stock market values of around US$140 billion. Stock market value is an overall measure of the confidence investors place in a company’s future. Perhaps investors are using a different crystal ball to oil company executives. 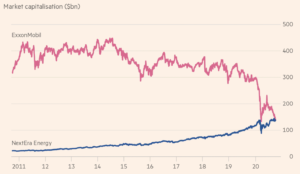 We can’t leave plastics without paying homage to this classic scene from The Graduate  (1968). It was prescient if nothing else.

WWF’s Living Planet Index (LPI) has been tracking the changes in the sizes of populations of vertebrate animals since 1970. It now monitors the sizes of almost 21,000 populations of over 4,000 species of fish, amphibians, reptiles, birds and mammals around the globe. Between 1970 and 2016 the global LPI declined by 68% (that’s by 68%, not to 68%: i.e. to 32%  of the 1970 level in under five decades). The most alarming declines have been seen in Central and South America and Africa (down 94% and 65% respectively), and among freshwater species (down 84%). It’s also shocking to be told that 90% of global wetlands have been lost since 1700. Although not currently measured in the LPI, plant biodiversity is also declining rapidly.

The drivers of the biodiversity loss are pretty similar in all cases: conversion of grasslands, savannahs, forests and wetlands to agriculture or habitation, overexploitation of species, pollution, introduction of invasive alien species and, becoming increasingly significant, climate change.

WWF report that humans are now overusing Earth’s biocapacity by at least 56% – i.e. we need 1.56 Earths, not one, to support us sustainably. We exceeded 1.0 in 1970 and it’s been increasing since, principally because of our growing carbon footprint since 1980.

Australia gets a few mentions in the report. Our Ecological Footprint of consumption per person in 2016 was (with North America, Saudi Arabia, Russia and, perhaps surprisingly, Scandinavia) in the highest of five groups; the Bramble Cay Melomys was noted as the world’s first mammalian extinction as a direct result of climate change; the vulnerability of flying foxes to high temperatures was highlighted; and, more happily, central and northern Australia contains (with Canada, Russia, Brazil and the Sahara) some of the last remaining terrestrial wilderness on Earth.

WWF has created the Bending the Curve Initiative which promotes an integrated combination of increasing the extent and management of protected areas, supply-side action to increase the sustainability of agricultural productivity and trade in agricultural goods, and demand-side action to reduce food waste from field to fork and reduce the amount of calories consumed from animal products in high-meat consuming countries.

A serial silver medallist, 747 has finally made it to the top of the podium. I just hope the podium is strong enough. 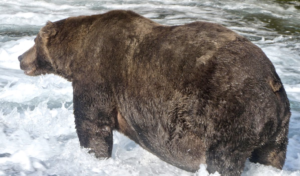