Professor Jeremy Moss of the University of NSW has analysed data from the Office of the Chief Economist to reveal that Australia is now the world’s largest exporter of coal and gas. Our exported greenhouse gas emissions more than doubled between 2000 and 2019 and are now only slightly less than the domestic emissions of Germany and the UK combined. In 2000 Australia’s exported fossil fuel emissions were slightly less than our domestic emissions (both about 500 MtCO2e per year). In 2019 our domestic emissions were about the same as 2000 but our exported emissions had climbed to about 1,150 MtCO2e per year. The vast majority of the exported emissions currently arise from burning coal (76%), with gas responsible for 20% and oil 4%.

Under the current international agreement for counting and reporting each country’s emissions, exported emissions are not included in the originating country’s tally. Moss calls for international agreements to (1) change the reporting rules to include emissions from exported fossil fuels in the originating country’s count, (2) stop the growth of production of fossil fuels (including no new mines or gas fields) and then phase out all production, and (3) a rapid phase out of fossil fuel subsidies. According to the International Monetary Fund, every Australian is paying $1,832 per year in fossil fuel subsidies. Moss argues that Australia is not a minor contributor to climate change and should focus on both reducing our domestic demand for fossil fuels and rapidly closing down our supply line to others.

Since the start of COVID-19, the rich G20 countries have collectively pumped (at least) an additional US$267 billion into supporting the production or consumption of various energy sources via new or amended policies. 56% of this has gone to fossil fuels and 33% to clean energy. Most of the help to fossil fuels has been untied to any climate targets or additional pollution reduction requirements and 80% of the support for clean energy has been untied to any environmental safeguards. Other energy sources (e.g. nuclear, biofuels, incineration) have received 10% of the dollars. The largest support, over half, has occurred in the USA (US$83 billion; 70% to fossil fuels) and Germany (US$56 billion; 30% to fossils). Australia’s contribution has been a relatively modest US$864 million, 55% of which has gone to fossil fuels (all to oil and gas and all untied to any climate or pollution targets), 14% to clean fuels and 30% to other sources.

‘In early April […] Trump gathered CEOs from some of the country’s biggest oil and gas companies […] to help the companies secure their place at the center of the 21st century American economy. “We’ll work this out, and we’ll get our energy business back. I’m with you 1,000%” he told the CEOs.’ So begins an article in Time (not a magazine I commonly read) that provides some clues to America’s additional support for fossil fuels. The article’s title, ‘2020 Is Our Last, Best Chance to Save the Planet’, clearly establishes the author’s, and presumably Time’s, position on climate change and the urgent need for action. Equally interesting is Time’s emphasis on the USA’s responsibilities for domestic and international climate action and their missed opportunities, and the magazine’s thoughts about the coming Presidential election: ‘It’s hard to imagine anything substantive [happening] so long as Trump is President’ is juxtaposed with a reasonably detailed description of Biden’s Green New Deal plans and rhetoric. The article finishes with the cleverly ambiguous: ‘The choice is ours. We just don’t have much time to decide.’

Greta Thunberg, who probably needs no introduction to P&I readers, was invited by Swedish radio to deliver an annual ‘summer’ lecture recently. In some ways the lecture is similar to our own Boyer Lectures, although the honour, prestige and profile associated with the Swedish version seem to be much greater. Ms Thunberg’s lecture – delivered in the style of a book with short chapters – has been podcast in English by the BBC. Despite its 53 minutes (with a very-British break for the news between 22 and 27 minutes), I thoroughly recommend a listen not only for her concerns and frustrations about climate change but also for her perceptive and wry observations about politicians, journalists and society at large. The journalist she describes in chapter eight who asks her ‘but who really is Gre-eta?’ would learn a lot from listening.

I discussed the development of, and some of the problems associated with, deep-sea mining for valuable minerals such as manganese, platinum, copper, gold and silver a year ago. Most of the risk studies have focused on the dangers posed to the environment close to the seafloor but a recent paper has drawn attention to the significant problems that will be created by the industry in ‘deep midwaters’, depths between 200 metres and 5 kilometres. The deep midwaters are particularly threatened by the noise generated on the sea-floor and during transporting the ores to the surface and by sediment plumes created both by the grinding of the sea-floor and by discharges from surface vessels when they separate the valuable ores from the tailings. The authors highlight the 3-D nature of the deep midwaters and their ecosystems and the potential for sediment plumes to be widely distributed by currents in vertical and horizontal planes.

The deep midwaters contain a remarkable 90% of the biosphere’s ecosystems and fulfill essential functions such as connecting shallow and deep-sea ecosystems, carbon transport to the ocean floor, and nutrient generation for food chains, some of which are important for harvested marine species. Sediment plumes clog respiratory and olfactory systems, contaminate the food supplies of suspension feeders, absorb light and reduce visual communication, and affect the buoyancy of gelatinous plankton. Noise particularly affects foraging and communication by marine animals and may disrupt the composition of ecosystems by forcing some animals to migrate. The authors call for the creation of no-mining zones, more baseline research, the development of environmental thresholds (similar to those for air pollution), rigorous pre-development environmental impact assessments and regular monitoring of mining if, as seems likely, it begins.

If the Albedo effect leaves you cold, maybe absorbing the information in the graphic below will help you reflect on it. 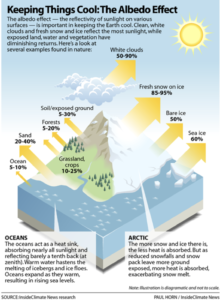