Almost half of all children globally are at Extremely High risk of suffering harmful consequences of climate change and other environmental shocks. Frogs and pollinators are at the sharp end of the loss of biodiversity. Fast fashion: first world behaviour with third world environmental and social consequences. Third world?? – bah, who cares? 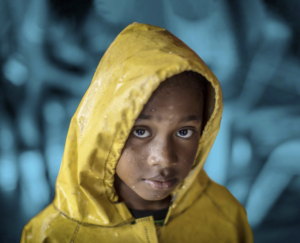 The evidence clearly indicates that children and young people are particularly vulnerable to climate change and other environmental shocks. Regardless of location, the increased vulnerability is attributable to both their immature physiological, anatomical and psychological systems and their social environments. Greta Thunberg has, almost single-handedly, led to a spotlight being shone on the climate-related concerns, frustrations, anger and agency of children and young people themselves. In the aptly titled ‘The climate crisis is a child rights crisis’, UNICEF reports the development of a Children’s Climate Risk Index and its measurement in 163 countries. The Index incorporates 57 variables into two elements: a measure of exposure to eight climate and environmental shocks and stresses (water scarcity, riverine floods, coastal floods, tropical cyclones, vector-borne diseases, heatwaves, air pollution, and soil and water pollution), and a measure of four factors that influence child vulnerability (child health and nutrition; education; water, sanitation and hygiene; and poverty, communication assets and social protection).

UNICEF is unequivocal that the only long-term solution is reducing emissions. Many actions can, however, reduce children’s exposure and vulnerability: principally poverty reduction; improved access to reliable, clean water, sanitation and hygiene services; better education, health and nutrition services; and improved social protection. But, importantly, UNICEF recommends that children and young people must be brought into policy development processes, not just heard but also involved in the decision-making.

I’ll finish with a quotation from the Foreword written by four young people: ‘Our futures are being destroyed, our rights violated, and our pleas ignored. It is immoral that the countries that have done the least are suffering the first and worst. We must acknowledge where we stand, treat climate change like the crisis it is and act with the urgency required to ensure today’s children inherit a liveable planet’.

Most readers will be aware that one aspect of the massive loss of biodiversity that is occurring globally is the loss of pollinators – mostly insects but also birds and bats – and that this has enormous implications for many of the crops on which humans rely for food. The consequences for crop productivity, nutritional security and economies are immense. Twenty pollinator experts from around the world participated in a structured process to determine the relative regional and global importance of eight drivers of pollinator decline. Globally, the order of importance of the eight drivers was:

While there was inter-regional variation in the relative importance of each of the drivers, all regions were exposed to at least three ‘Very Important’ regional drivers. South America was the region where pollinator decline poses the greatest risk to humans.

The priority actions for halting the decline of pollinators in the immediate future should clearly focus on reducing the pressures from changes in land cover and configuration, improving land management practices and reducing pesticide use. Climate change was rated ‘Very Important’ or ‘Important’ in all six regions but overall it ranked only fourth in importance. None the less, limiting climate change remains a priority as it is likely to have serious long-term effects on pollinators

Closer to home, twenty-six species of Australian frogs (over 10% of our total) are at imminent risk of extinction – in fact four are probably already extinct and another four are hanging on by the skin of their teeth (yes, yes, I know). More than half of the threatened species are in Queensland. The problem is caused by the usual extinction culprits (climate change, altered fire regimes, loss of habitat, and invasive species, particularly fish and feral pigs in this case) and the worldwide chytrid fungal pandemic – a disease with consequences far more disastrous for amphibians than COVID has for humans. Apart from the problem of tackling chytrid, it’s pretty obvious what needs to be done to save the frog species that remain. Captive breeding programs and better population monitoring would also help. Apart from anything else, imagine losing animals with such great names as the Northern gastric-brooding frog, the Kroombit tinker frog, the Armoured mist frog and the Mountain top nursery frog. It would be a combined batrachological and etymological tragedy. 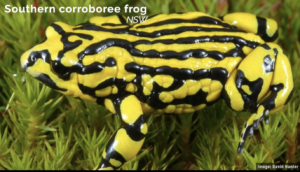 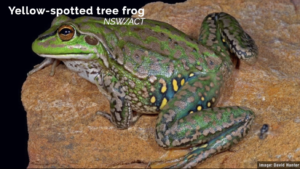 Cattle grazing on top of a 20-metre-high pile of landfill, most of it unwanted clothing. Unwanted not by bored, locked-down Australians clearing out their wardrobes but unwanted by some of the poorest people on earth – people in Accra, Ghana, the final destination of the discarded clothes that the West’s charity shops reject. A dozen people pushing each other around as they dive into and grab items from a newly opened bale of discarded clothes from Europe, North America or Australia – not for their own personal use but for potential sale. A young mother who makes about $4.50 a day by carrying 55kg bales of second-hand clothes on her head – enough for her to live on and to send some back to her family in the country. Piles of discarded clothes washed up on Ghana’s beaches, having been washed down the sewers, flushed out to sea and then dumped back on shore. These are some of the images that stand out from ‘Dead white man’s clothes’, a recent Foreign Correspondent program on the ABC that exposed some of the consequences of the West’s obsession with fashion. An obsession that has seen the global production of clothing double since 2000, with ‘fast fashion’ encouraging people to buy cheap, buy often, wear twice, discard quickly. Overproduction and waste are simply business expenses for many fashion companies. On a per capita basis, Australia is second only to the USA in its consumption of textiles. An obsession that has, on the other hand, also created a global trade in second-hand clothing that is worth about $4.6 billion per year and created around two million jobs in Accra alone.

Talking of women carrying heavy loads, have a look at the task undertaken by Birma, a health worker in Nepal.

And if you’ve got 30 seconds to spare this weekend and you want to do one good deed for biodiversity, you might like to tell the WA government to listen to the Traditional Owners and not allow the Fitzroy River to be dammed so that water can be drawn from it for irrigation. Amongst other harmful effects, changing the water flow in the Fitzroy and increasing the pollution from agriculture will put added pressure on the already threatened Freshwater Sawfish.

If you were busy mid-week, you may have missed the two excellent P&I articles in which Rhonda Boyle provided succinct and clear overviews of Australia’s greenhouse gas emissions (a sort of ‘Australia’s GHGs 101’). The first article identified the various greenhouse gases and how their emissions are measured, and explained where Australia’s emissions originate (the table and figure are particularly illuminating) and how they have changed (overall, not very much) over the last 30 years. In her second article Boyle examines the Commonwealth government’s greenhouse gas emission projections. She demonstrates that even if Australia’s current extremely modest goal of a 26-28% reduction in emissions between 2005 and 2030 is achieved (not a certainty), the annual rate of reduction in emissions after that will have to increase by a highly unlikely 3-4-fold for Australia to reach net zero emissions by 2050. Boyle sees little likelihood of the much-needed Commonwealth leadership on emissions reductions as they are ‘not serious about the mammoth task ahead, they are simply ‘kicking the can down the road’.’

Depressing but can’t help feeling there’s more than a grain of truth in the Tragedy World Map. 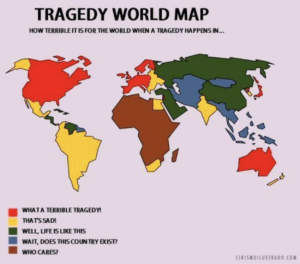