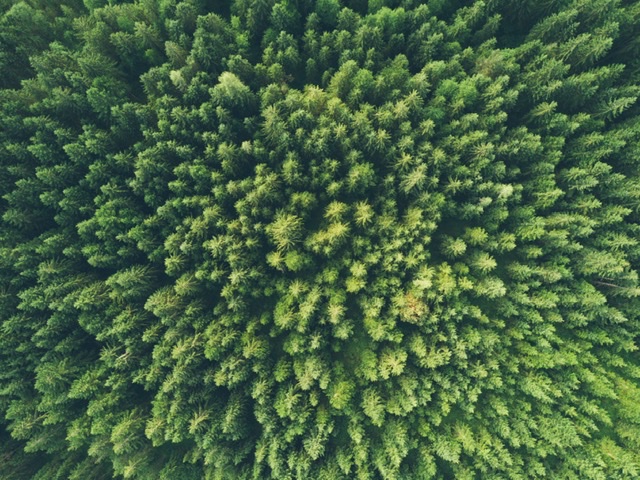 ‘Net-zero emissions’: is it just greenwashing for business-as-usual? Despite the COVID-induced global economic slowdown, deforestation and the atmospheric concentrations of greenhouses gases both increased in 2020. Limited bleaching and death of corals on the Great Barrier Reef this summer.

The term ‘net-zero emissions’ has become ubiquitous. Governments, global intergovernmental bodies and companies love to use it in their targets because it sounds good – it’s got ‘zero’ in it and that’s what we all want, isn’t it? Zero greenhouse gas emissions!! Unfortunately, ‘net-zero’ is mostly being misused to avoid the real issue: reducing emissions, principally from the burning of fossil fuels, to absolute or ‘real zero’. Many corporations and governments are using the term, particularly ‘net-zero by 2050’, to greenwash business-as-usual emissions, or even increased business-as-usual emissions, and defer responsibility for meaningful climate action to future managers and ministers.

There are two main ways in which governments and companies are misusing the term ‘net-zero’, and the ‘offsets’ that reduce emissions from gross to net, to justify to the unsuspecting the continued burning of fossil fuels:

1) ‘We’re planting more vegetation, mainly trees, that absorb CO2 from the atmosphere. Sure, we still emit 20 million tonnes of CO2 per year but we’ve planted enough trees to absorb the same amount’, is the wool-over-the-eyes claim here. The main problem with this furphy is that the ‘net’ in ‘net-zero’ is not meant to allow a company or more broadly a society to continue emitting whatever it wants and offset these emissions on a balance sheet by planting enough trees to (allegedly) absorb an equivalent amount of CO2. Rather, the ‘net’ qualifier to ‘zero emissions’ is really meant to be recognition that the emissions from some activities, such as steel and cement making and air travel, are particularly difficult to prevent and will take the greatest time and effort to eliminate. Instead of shrugging and saying, ‘Ah well, we’ll just have to live with that for the time being’, the idea of ‘net-zero’ is that until this relatively small proportion of total emissions (say, 10-20%) can be eliminated, they should be offset by, for instance, planting trees so that the continuing, but hopefully steadily decreasing residual emissions, do not increase the already far too high concentration of CO2 in the atmosphere.

2)  ‘We’ve changed the way we were planning to do things so that we will not now emit some emissions that we would have.’ This one is a real con and even Mark Carney, ex-head of the Bank of England and almost the patron saint of climate action in the global finance sector, was recently caught out perpetuating this sleight of hand. A simple mathematical example makes the duplicity of this ‘avoided emissions’ approach clear. Imagine that a widget-making company uses 100% fossil fuel-generated energy and the generation of this energy emits 100 tonnes of CO2 per year. Imagine the company plans to double widget production and intends to purchase the additional energy they need from solar and wind farms. With this plan they will avoid emitting an additional 100 tonnes of CO2 per year. On their books, this is then offset against the  100 tonnes they still emit from the use of fossil fuels. Hey presto, ‘net-zero’ emissions despite still emitting 100 tonnes of CO2 per year. Ignoring the fact that only real emissions reductions to as close to real zero as possible will prevent human and environmental catastrophes.

It’s great that all Australian states and territories have set goals of net-zero emissions by 2050 – it demonstrates that at least they understand there’s a need for climate action. But there are several problems:

2) there’s a serious risk that achieving ‘net-zero’ will involve a lot of creative carbon accounting rather than real emissions reduction, particularly bearing in mind the difficulty of ensuring integrity in the implementation of ecosystem offsets and measurement of the actual carbon sequestration achieved;

3) many offsetting or carbon trading schemes may turn out to be little more than damaging disruptions to ecosystems and communities in the Global South so that the Global North can continue its prodigal behaviours.

Measures to improve the integrity and effectiveness of offsetting schemes include: prioritising near-term action; permitting countries to count CO2 absorption only from offsetting schemes within their own borders; establishing separate targets for emissions avoided completely and emissions removed from the atmosphere in carbon sinks; ensuring the protection of existing intact ecosystems; and formulating international guidelines for integrity, monitoring and transparency.

Despite the economic and consumption consequences of COVID-19, the loss of forests increased by 7% globally during 2020 (12% in the tropics), with almost 100,000 square miles (the size of Victoria plus some) of tree cover lost. Many causes were involved. Land clearing (often illegally) for  crops and cattle ranching continued, while massive fires in Russia, USA and Australia, droughts and insect infestations were related to climate change. As the figure below clearly demonstrates, most of the losses occurred in Russia, Brazil, Australia and the USA. Deforestation is increasing in Brazil (where many of the fires in the Amazon were deliberately lit to clear land) and the Congo but Indonesia has been decreasing its deforestation since the disastrous human-lit fires of 2015. 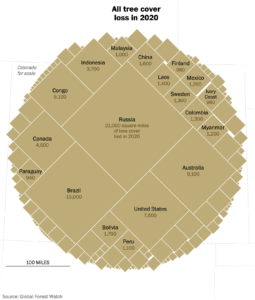 It wasn’t only the forests that provided bad news for the environment during 2020. The economic recession slowed down many industries and dramatically reduced transportation and travel, resulting in a 7% decrease in carbon emissions. But despite this, atmospheric levels of carbon dioxide and methane, the two main contributors to global warming, continued to rise. In fact, the annual increase in CO2 during 2020 (2.6 parts per million) was the fifth highest ever recorded and would have been the highest ever had it not been for COVID. 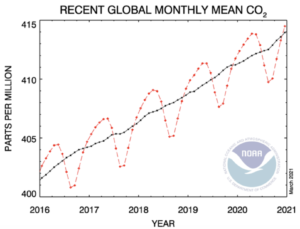 The increase in the level of methane in the atmosphere during 2020 (14.7 parts per billion) was the largest annual increase ever recorded. 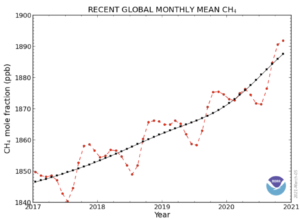 Corals can tolerate only a narrow temperature range and even half a degree Centigrade increase in summer can cause bleaching if it goes on for too long. In February I highlighted the rise in sea temperature at Lizard Island on the Great Barrier Reef and the bleaching that was beginning to occur. Fortunately, several cyclones passed close by but not directly over Lizard Island during the summer and the associated rainy windy weather cooled surface waters and reduced the stress on the corals. So, although some bleaching has occurred it seems likely that there won’t be much death of corals this year, which is great news as it should help the Reef continue to recover from the disastrous summers of 2014-2017. Unfortunately, this will probably be only a temporary respite as continued global warming all but guarantees that summer sea temperatures on the Reef will be high enough to cause further coral bleaching and death in the near future.

One nest box might look much like another nest box to you and me but not to a possum, parrot or microbat. The 2019/20 bushfires destroyed many of the trees that animals call home. On the valley floor of Bush Heritage’s Scottsdale Reserve near Canberra 80% of trees with hollows were lost. Stepping in quickly to provide emergency accommodation, staff and locals have constructed 60 nesting boxes, each one carefully designed and located to suit a particular species and discourage predators. The boxes are being installed over autumn to be ready for the new home-owners to take up residence in winter and spring. 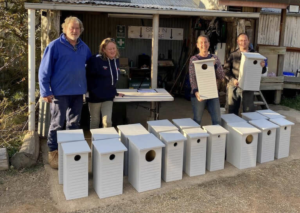