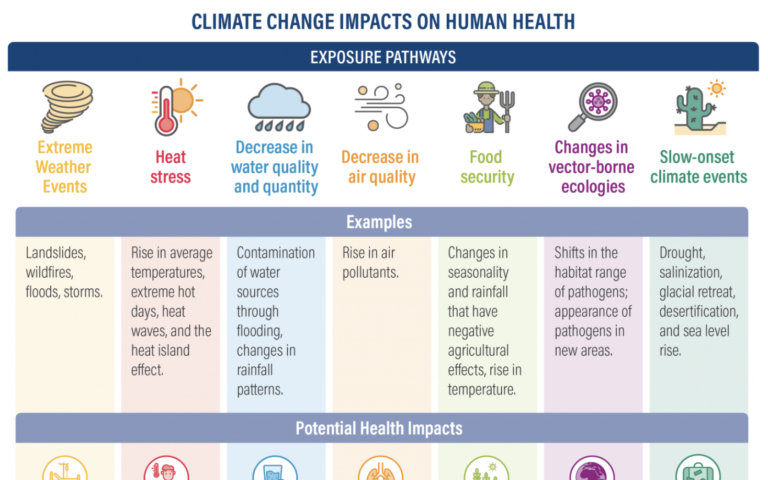 Blind Freddy can see that bushfires, heatwaves, cyclones, floods and droughts are bad for people’s physical and mental health, sometimes fatal. And even Freddy’s truculent, red-neck uncle is beginning to suspect that global warming may be increasing the frequency and severity of extreme weather events. But for some obscure reason the catastrophic consequences of global warming for people’s health, welfare and livelihoods are still not well appreciated. To cite just two examples of the harms.

First, warmer temperatures expand the breeding ranges of mosquitoes both latitudinally and altitudinally and by 2050 an additional 51 million people in Western Africa alone will be exposed to the risk of malaria.

And of course, while everyone is at risk of the harmful health effects of climate change, and will be increasingly so, it is the most vulnerable individuals, communities and nations who are at greatest risk, have the least ability to mitigate risks, and have the poorest access to personal and public resources to deal with illness and injury when they occur. This entrenches vulnerabilities and creates intergenerational poverty and ill-health. The varied health risks associated with climate change are nicely summarised in the graphic below from a World Resources Institute (WRI) report. 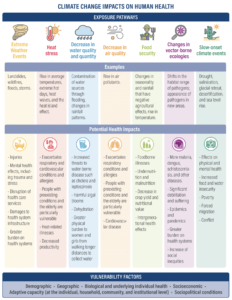 Of course, if climate change presents challenges for health, it will also present challenges for health systems and health services. Unfortunately, this also is not well recognised, particularly not by politicians, and few countries’ national adaptation plans include adequate recognition of, or funding to cope with, the negative health effects of climate change. Top of the WRI’s recommended actions for governments are no-regrets adaptation measures to strengthen health care systems – the sorts of actions that would benefit communities even in the absence of climate change such as establishing robust food and medical supply chains, training of health staff for extreme climate events, and protecting against and preparing for interrupted health services. Ministries of health in some countries such as the UK and Fiji have established climate change and health units to improve information and planning and drive change across their health systems.

We (in the broadest sense) are much more aware in 2021 than we were even ten years ago of the ineluctable connection between the twin crises of climate change and loss of biodiversity – and, remembering the previous piece, their individual and combined links to human health and wellbeing. So, it is appropriate that the Intergovernmental Science-Policy Platform on Biodiversity and Ecosystem Services (IPBES) and the Intergovernmental Panel on Climate Change (IPCC), two of the international bodies responsible for dealing with these crises, held a joint workshop in December 2020 to tackle synergies and trade-offs between biodiversity protection and climate change mitigation and adaptation.

The recently released synopsis of the workshop includes 41 conclusions focused on some predictable, but still very welcome, ideas. In particular, the workshop concluded that limiting global warming and protecting biodiversity are not only essential but also mutually supporting, and that measures that are narrowly focused on climate change or biodiversity can have sub-optimal (or even negative) outcomes compared with measures that tackle both.

Speaking personally, however, the conclusions that are most significant emphasise the importance of treating climate, biodiversity and human society as coupled systems and the need for transformative change in the governance of socio-ecological systems. A social-ecological systems perspective encourages consideration of trade-offs, co-benefits, complex interactions, feedbacks, threshold effects and non-linear relationships among social and ecological variables across time (for instance generations) and space. Regrettably, policy development and implementation has not traditionally adopted such a complex, holistic, inter-sectoral approach – and the consequences are frequently obvious even to our visually-challenged friend.

Now for a bit of climate science reporting history. The screenshot below is from the New York Times of 12 June 1986 – 35 years ago, eight years before the UNFCCC (United Nations Framework Convention on Climate Change) was established. According to the NYT, this article contains one of the earliest references in the paper to ‘global warming’. 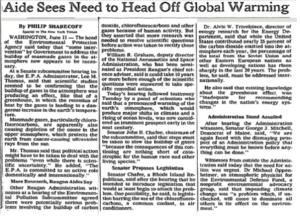 However, an article from 1969 about the thinning (or not) of the Arctic ice sheet does refer to ‘climate warming’ and ‘climate cooling’. What is particularly interesting about the latter quite lengthy and detailed article is that it is only in the last three paragraphs that carbon dioxide (‘a by-product of the industrial revolution’) is mentioned as a possible cause of the warming observed before 1940. That ‘suspicion’ was dismissed, however, because ‘the cooling trend of recent years indicates that other factors are at work.’

Talking of the popularity of climate-related terms, the two graphs below chart the frequency of use of the words ‘global warming’ and ‘climate change’ in the English language over the last 50 years. Usage of both seems to have reached a plateau which is a little surprising.

Australians know better than most what a forest fire is and an increasing number of Australians accept that climate change is increasing the severity and range of the fires. Or perhaps more accurately, Australians know what Australian bushfires look like. Forest fires in the carbon-rich soils of the boreal forests of Alaska, Canada and Siberia can look very different. ‘Overwintering’ fires can smoulder through the wet cold winters and spring into more vigorous life again when spring comes along. Although these ‘zombie’ fires are relatively rare, they can burn vast areas.

Like Australian bushfires, they are also connected to climate change and are becoming more frequent, particularly as the Arctic is warming much faster than the rest of the world. To make matters worse, because the fires occur in peat that is rich in carbon, when they burn they emit very large amounts of carbon dioxide and methane. In fact 90% of the CO2 from the fires comes from the soil and only 10% from trees.  A vicious cycle is established: global warming increases the likelihood and extent of the fires which emit large amounts of greenhouse gases which increase global warming which makes fires even more likely, wash, rinse and repeat.

June is Pride Month globally, a month when the LGBTQI+ community celebrates its achievements and draws attention not only to the injustices that they continue to suffer but also to all injustice. 350.org is celebrating Pride Month by highlighting the climate leadership shown by six LGBTQI+ staff members around the world, including Kelly Albion from Australia. The quotations below from the leaders’ brief profiles illustrate a common theme that justice and human rights for all must go hand in hand with creating a sustainable planet.

‘Being queer made me along my life to be more sensitive and more attentive to social justice issues in general.’

‘If we are creating a world that is better world for everyone, queer liberation is a core part of that vision. We want to create a world where everyone is loved, accepted, and celebrated for who they are.’

‘Queer liberation in the Global North is very different than in the Global South. The fight for marriage equality is one thing… but, in Tonga, people are just fighting to be seen. In Tonga, the same people fighting for human rights are also fighting to protect their island and homes.’

‘We must continue to focus on building a society based on not just equality but equity. If one of us isn’t free, then none of us are free.’