Sunday environmental round up, 21 March 2021 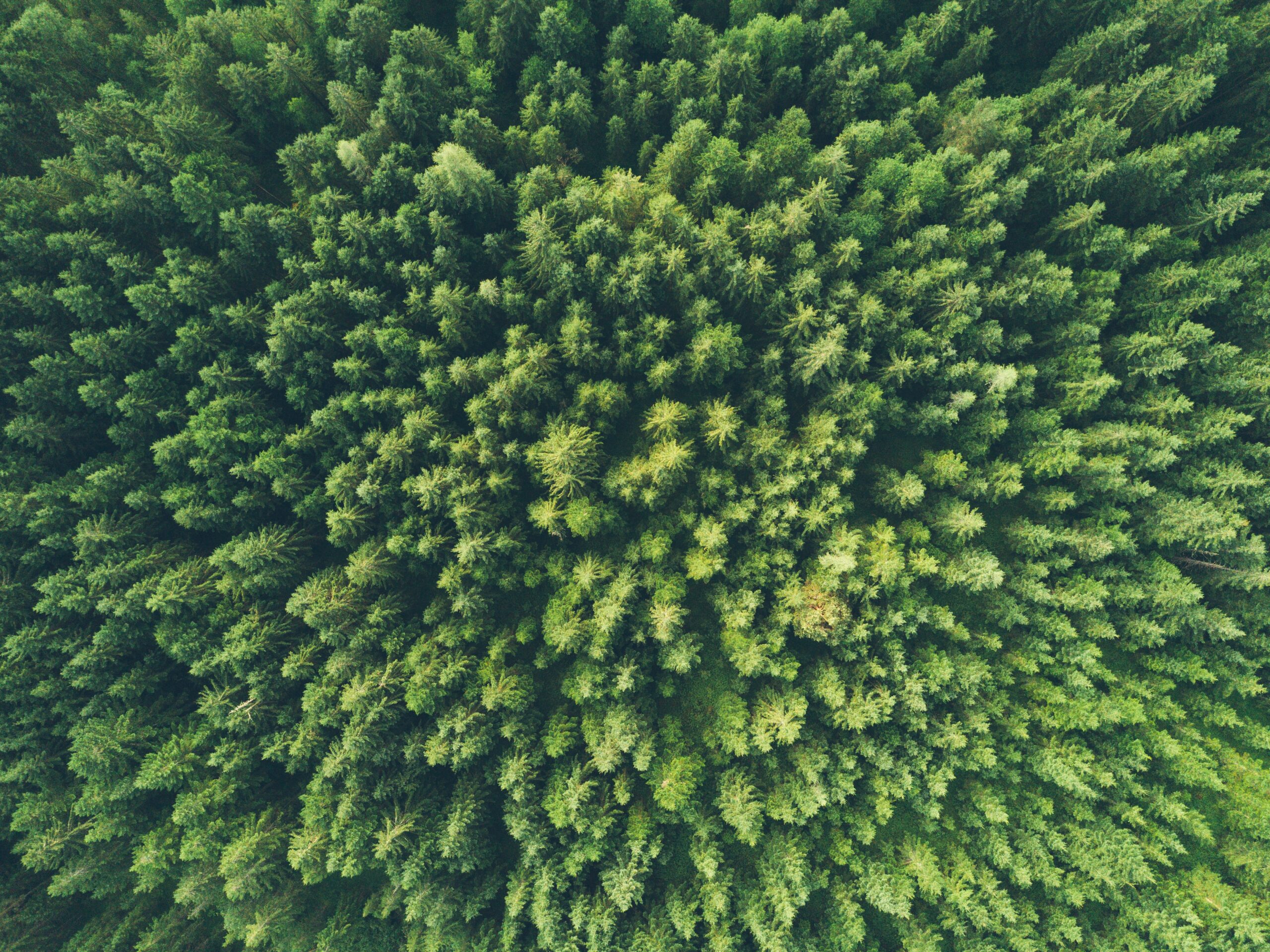 Last chance to have a say on the review of the Environmental Protection and Biodiversity Conservation (EPBC) Act. Increasing temperatures are changing the climate-defining currents of the Atlantic Ocean. Forests being lost to provide wood to burn for electricity and land for agriculture. Hotchpotch of rules govern single-use plastics across Australia.

Graeme Samuel’s review of the Environmental Protection and Biodiversity Conservation (EPBC) Act was released publicly (with the absolute minimum of hoopla by Minister Ley) six weeks ago. The review received some media attention (e.g. here and here) at the time but things have gone quiet since the release and Samuel’s recommendations and the Act seem to need a little protection and conservation of their own. For a flavour of the report, without reading even the (35 page) Executive Summary, I strongly recommend Samuel’s two page Foreword. This was Samuel’s opportunity to express his feelings, not just his findings, and what emerges most clearly is his recognition of the dire state of Australia’s environment, the outdated and unfit-for-purpose nature of the Act, the failure of governments to administer the Act effectively, and the need for fundamental reform of the Act and its administration. Samuel is clear that Australians do not trust the Act to deliver for the environment (astonishingly and encouragingly, the review received over 30,000 written submissions) and there’s a suggestion that he doesn’t trust government to do any more than cherry pick from his recommendations.

Regrettably, cherry picking appears to be what the government is doing. It has introduced two pieces of legislation designed to:

While the Standards and the Commissioner are good ideas, the current proposals are a long way from what is needed. The proposed interim standards are weak, ineffective, full of loopholes and no better than what we’ve got at present. As intended by the Government, the Commissioner would have no dedicated staff, be dependent on the Secretary of the Department of Agriculture, Water and the Environment for resources, and have very limited powers of audit. Compliance and enforcement would be left mainly to the states and territories.

A Senate Committee is now examining the draft legislation and is receiving submissions until close of business this coming Thursday, March 25th. It’s very important that the Senators are aware of the strong public desire for national laws that will establish sound principles and robust structures and processes for the protection of Australia’s land, fresh water, oceans, air, flora and fauna. If you’d like to make a submission, the Australian Conservation Foundation has a helpful guide. It doesn’t need to be long or technical. Just tell them how you feel and what you want: robust legislation that protects our environment, in essence implementation of all Samuel’s 38 recommendations.

I don’t think we were taught much about ocean currents at Clitheroe Royal Grammar School for Boys (founded in 1554; motto: In saxo condita) in the 60s. All I remember is that the Gulf Stream brought warm air north from the Caribbean and that it prevented the UK being as cold as Newfoundland and Labrador which sits at a similar latitude on the other side of the Atlantic. It’s a lot more complicated than that though. The tongue-twistingly named Atlantic Meridional Overturning Circulation (AMOC) is the appellation for the array of currents that swirl around the North and South Atlantic Oceans taking warm surface water from the tropics to the poles and colder, denser water back to the equator along the seabed (see map below). This may all sound rather arcane but the AMOC plays a large role in determining climate and weather patterns on both sides of the Atlantic – including influencing the development of civilisations since the last Ice Age. It also affects the distribution of many species of fish and seabirds. So, research showing that climate change is already slowing the circulation of the Atlantic currents and that this will increase in the next few decades spells trouble. For instance, pools of warm water are more likely to form and ocean heat waves are linked with droughts and heat waves on nearby land. Changes to the water temperature and salinity will shift the production of plankton, the foundation of the oceanic food chain, and affect the distribution of fish and hence fisheries. Climate change precipitated changes to AMOC have been predicted for several decades but the new evidence indicates that it’s happening faster and earlier than predicted. 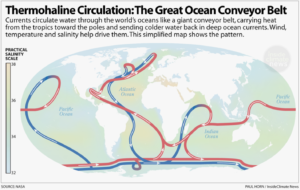 More than 500 scientists and economists have advised world leaders in the USA, Europe, Japan and South Korea to stop burning wood from forests to generate energy and heat. The CO2 released when biomass is burnt is not counted in countries’ emissions and so many countries are replacing fossil fuels with trees to generate energy. The problem, however, is that burning wood produces two to three times as much CO2 as fossil fuels, plus, of course, you lose the CO2 absorbing capacity of the forest. And contrary to what the industry claims and has been the received wisdom, mature forests hold and absorb more carbon than young trees. On top of which, deforestation destroys biodiversity and ecosystems. And it destroys local communities and their lifestyles!

Currently the major suppliers of wood pellets for burning are the USA, Canada, Baltic states and Vietnam, while the major buyers are the UK, the EU (where 60% of renewable energy comes from biomass), South Korea and Japan. Between 2017 and 2027, the annual demand for wood pellets is expected to increase from 14 to 36 million tons, mainly driven by Japan and South Korea. Australia is predicted to become a significant producer of wood pellets for burning. The scientists’ recommendations to stop this multi-billion dollar, climate damaging and completely unnecessary industry are: stop all subsidies and incentives for using biomass as an energy source; and stop treating biomass as carbon neutral in the USA and Europe.

Chopping forests down to burn for energy isn’t the only reason we are losing them. Between 2001 and 2015, agriculture was responsible for about 45% of deforestation. Just seven agricultural products – cattle, palm oil, soy, cocoa, rubber, coffee and fibre – were responsible for 26% of total deforestation. This is an area twice the size of Germany, although it mostly occurred in the tropics of course. Pasture for cattle farming is the major problem, accounting for 16% of total tree cover loss.

It’s all very well to focus on the actual sites of deforestation – and blame the national governments for corruption and/or inadequate action – but if you want to know where the real problem lies, as ever, follow the money. The world’s financial and commodities corporations may be increasingly dumping fossil fuels (possibly for economic rather than environmental reasons) but despite all their fine policies, commitments and words, the banking giants (e.g. JP Morgan Chase, Wells Fargo, Bank of America, BNP Paribas, HSBC, Barclays), investment companies and asset managers (e.g. BlackRock, Vanguard, State Street) are continuing to bankroll food, farming, grain traders, meatpackers and retail companies (e.g. ADM, PepsiCo, Nestle, McDonalds, Walmart). It’s the financiers, producers and retailers that are ultimately responsible for much of the deforestation. Of course we will need more food as the global population inevitably increases to ten billion and the populations of developing countries become more affluent over the next three decades but we need to find ways of feeding ourselves sustainably, not continue the highly environmentally-destructive farming practices of the last 60 years.

If you’re a little confused about the different state and territory commitments to ban single-use plastics, this table might help you. South Australia is way ahead on action, with the ACT, Queensland, Victoria and Western Australia catching up over the next couple of years. NSW, the Northern Territory and Tasmania have barely left the starting line. Tasmania and Victoria are introducing Container Deposit Schemes over the next two years; all other jurisdictions have already done it. It’s not unusual to see people collecting plastic bottles in Sydney these days. Some seem to be very well organised, so I assume there’s money to be made from it. Fundamentally though, most plastic still goes to landfill or into the ocean. 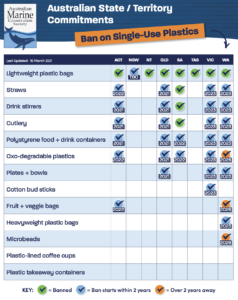