Small farmers and local, sustainable food production more likely to feed the world than multinational corporations supported by government subsidies. Health professionals come out fighting on climate change and Biden hears the roar. 2020 and the planet is in its worst shape ever.

Most of us in the West and in cities throughout the world obtain the vast majority of our food from shops. Food has become a commodity that is produced, transported and traded for profit rather than something grown and raised locally as a basic necessity of life. And yet, humans remain dependent on the soil for much of our food – little different now from, say, 2,000 years ago. However, not only are our food systems destroying the livelihoods of small scale farmers and failing to provide adequate nutritious food for everyone, they are also destroying our environment. For instance, if we look at our complete food chain from farming (including land clearing, fertilisers, irrigation, mechanisation, etc.), processing, packaging and transport through to distribution, refrigeration, cooking and waste, the whole food system is responsible for approximately half of all greenhouse gas emissions. And fertilisers and pesticides are responsible for the loss of species on land and in waterways and oceans. The fragility of our food systems was highlighted during the early months of the COVID epidemic. Is there an alternative? A food system that provides decent livings for primary producers and nutritious affordable food for all without destroying the environment.

Founded in 1993, La Via Campesina is an organisation of approximately 200 organisations in a hundred or so countries around the world. It brings together 200 million peasants, small and medium size farmers, landless people, rural women, young people, indigenous people and agricultural workers. Built on a strong sense of solidarity, La Via Campesina defends peasant agriculture, promotes social justice and dignity and strongly opposes corporate driven agriculture that destroys social relations and nature. It promotes food sovereignty: the right of people to healthy and culturally appropriate food produced locally and sustainably. One component of this is defending the rights and capacities of farmers to use, develop and reproduce their own seeds against attempts by multinational corporations to establish patents and monopolies on seeds, part of our common heritage.

We all know that governments are handing over vast sums of money to support the fossil fuel industries globally. However, governments also give out US$700 billion in agricultural subsidies every year (that’s well over US$1 million per minute). Assuming the subsidies are well-intentioned, they are aimed at increasing crop yields and farmers’ incomes and in some cases developing rural areas. Unfortunately the subsidies often have harmful effects, most commonly encouraging landowners to clear forests to produce cash crops such as soy and beef, lowering the productivity of soil in forests and on the farms where it leads to lower crop yields, encouraging excessive use of fertilisers and pesticides, and increasing carbon emissions. To feed 10 billion people in 2050 agricultural subsidies need to be refocused on long term food security, rural development and environmental sustainability. These can be achieved by reversing land degradation, investing in land restoration, achieving real sustainable increases in crop yields, and supporting smallholder farmers (most of the world’s food is produced on lots of fifteen hectares or less). Agricultural subsidies should be underpinned by four principles: remove subsidies for fertilisers and pesticides that no longer improve crop yields; create incentives for farmers to restore degraded land and farm it sustainably; target subsidies on small farmers and, where necessary, provide them with land rights; and encourage government departments of agriculture, environment, rural planning and finance to work together for common goals.

The editors of over 200 internationally respected health journals, including The Lancet, BMJ, New England Journal of Medicine and Medical Journal of Australia, have endorsed an editorial calling for emergency action by world leaders to limit the average global temperature increase to 1.5oC, halt the destruction of nature and restore biodiversity, and protect health: ‘We are united in recognising that only fundamental and equitable changes to societies will reverse our current trajectory’. The editors summarise the risks of increasing temperatures on people’s health – everyone’s health but especially the health of vulnerable individuals and communities. They highlight the increasing risks if 1.5oC is exceeded but are clear that global governments’ currently insufficient action is likely to result in warming well in excess of 2oC: ‘a catastrophic outcome for health and environmental stability’. The authors are unequivocal that equity must be at the centre of the global response and that wealthier countries, particularly those that have contributed most emissions historically, must cut their emissions earlier and faster than low and middle income nations. The ‘fundamental changes [required] to how our societies and economies are organised and how we live’ will require urgent government intervention and enormous investments but the health and economic benefits will be huge. ‘The greatest threat to global public health is the continued failure of world leaders to keep the global temperature increase below 1.5oC and to restore nature’, conclude the editors.

President Biden is keeping up the pressure on climate change. The US Department of Health and Human Services is establishing the Office of Climate Change and Health Equity with a mission ‘to protect vulnerable communities who disproportionately bear the brunt of pollution and climate-driven disasters, such as drought and wildfires, at the expense of public health.’ Not only is this a statement by the US government that climate change is ‘turbo-charging’ extreme weather events that are bad for people’s health, it is also a formal recognition that disadvantaged communities are both disproportionately exposed to climate hazards and particularly vulnerable to harmful health effects when exposed. The new Office is responsible for identifying highly exposed and vulnerable communities, addressing health inequalities exacerbated by climate events, assisting regulatory efforts to reduce greenhouse gas emissions and air pollution, and providing expertise and coordination ‘related to climate change and health equity deliverables and activities’ to the White House and the Secretary of Health and Human Services. Two comparisons are noteworthy. First, the obvious difference in both rhetoric and action between the USA and Australia. Second, the recognition within the USA of persistent inequalities. Twenty years ago ‘health inequality’ and ‘health equity’ were dirty words in the USA, which has traditionally emphasised opportunity rather than outcome. But now we see government statements making explicit reference to health equity. 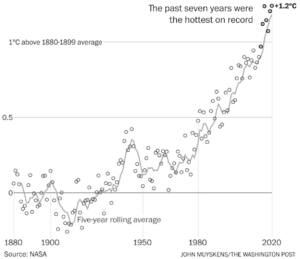 The recent IPCC scientific report painted a very grim picture of climate change – but, by the very nature of such reports that appear every few years and synthesise the results of many scientific studies, the findings were already a little dated by time of publication. Perhaps the economic downturn prompted by COVID in 2020 changed things for the better?? No such luck according to ‘State of the Climate in 2020’, the annual report of the USA’s National Oceanic and Atmospheric Administration (NOAA). On the contrary, planet Earth is in its worst shape ever: 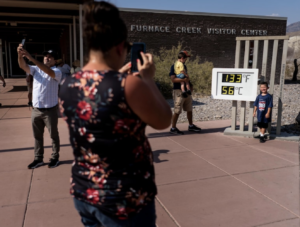