Sunday environmental round up, 22 November 2020

Wealthy people and wealthy nations cause it but it’s the poor and vulnerable who suffer the most from climate change. Adani is behaving badly in Australia but moving into renewables in India. Recycling plastic recycling. Spotted and striated, pardalotes charmalot.

Climate change: we might all be in it together but we certainly haven’t all caused it together:

Established in 2009, the Climate Vulnerable Forum (CVF) is an international partnership of 48 countries in Africa, Asia, the Caribbean, Latin America and the Pacific, with a total population of 1.2 billion, that are most threatened by climate change. In some cases the threats are to the country’s very existence; in some cases the threats are to the health and lives of the inhabitants (see here for some examples). As well as building collaboration, commissioning research and building awareness, the CVF aims to encourage all nations, especially the rich, high emitters, to commit to ambitious action to tackle climate change through ramping up their Nationally Determined Contributions (NDCs). The world’s current NDCs, announced by each nation as part of the 2015 Paris Agreement, have the world on track for a disastrous 3oC of warming. As agreed in Paris, nations are required to upgrade their commitments by the end of 2020 – i.e., by midnight on 31 December.  To focus attention on this deadline, CVF has launched Midnight Climate Survival to stimulate more ambitious action and monitor each nation’s promises. The map below shows the current state of affairs. There is, as you can see, a profusion of red and yellow that indicates that the majority of nations have either promised but not submitted more ambitious NDCs (this group includes Australia) or not made any commitment at all as yet. Somewhat surprisingly, New Zealand is one of a handful of countries that have submitted updated NDCs that show no increased ambition compared with 2015. 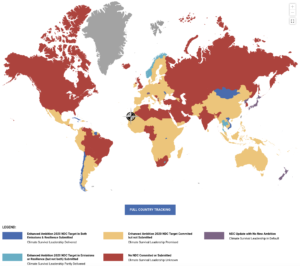 For many commendable reasons, Adani is the arch-enemy of the Australian environmental movement but Tim Buckley and Simon Nicholas have documented the massive growth over the last five years of Adani Green Energy, the largest listed energy company in India and one of the world’s largest solar developers. This is indicative of a major shift by the Adani Group towards renewable energy and support for India’s goal of energy independence. The company needs investors to help it further develop Adani Green Energy and other ventures such as Adani Ports but its continued involvement in fossil fuels discourages potential investors who are showing increasing interest in the environmental, social and governance (ESG) credentials of companies. This trend has been well demonstrated in Australia where Adani has struggled to attract investors, banks and insurers to its Carmichael coal mine in the Galilee Basin. Buckley and Nicholas believe that Adani could increase its attractiveness to global investors by pledging to close Indian coal plants as power purchase agreements expire and shift away from importing thermal coal to India. ‘With thermal coal in a slow but clear terminal decline, now is the time for the Adani Group to make an exit plan’, say the authors.

Adani’s social and environmental credibility in Australia has certainly not been boosted by intimidating Ben Pennings, an anti-Adani coal mine activist, with legal action, seeking permission to raid his home and hiring a private investigator to follow and photograph him and his family.

I covered some of the problems associated with plastic recycling and alternatives to plastics a few weeks ago but I didn’t discuss the actual recycling process. It’s a bit technical, it has a strong Canadian orientation and it freely admits that lots is still unknown but this article emphatically states that: ‘Advanced chemical recycling of plastics is a profoundly energy-intensive process that generates a frightening array of known toxins and poses profound and multiple risks to public and planetary health.’ High temperatures and lots of energy and solvents are needed to break plastics down into their constituent molecules before they can be reassembled into new plastics or converted to liquid fuel that is more polluting than diesel when burnt. The disassembly process releases various toxic chemicals that are added to plastic during manufacturing to prevent degradation, retard flames and increase elasticity. Even the collecting, sorting, cleaning and shredding process for recycled plastics is energy-intensive. Maybe recycling plastics isn’t such a good idea for the environment, ecosystems or human health, at least not until we know more about it and have cleaner processes. And introduce a consistent system for packaging.

It’s been pardalote time for me recently. I spent four great days last week walking in the Snowy Mountains. On one of my sunrise ambles beside Lake Jindabyne I was delighted to watch a Striated Pardalote for five minutes. And then The Conversation published a wonderful article about pardalotes by John Woinarski. This is definitely worth five minutes of your time. 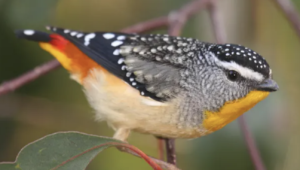